Tracking is only real time if vessel is at sea.

S. A. Agulhas II is a South African icebreaking polar supply and research ship owned by the Department of Environmental Affairs (DEA). She was built in 2012 by STX Finland in Rauma, Finland, to replace the aging S.A. Agulhas, which was retired from SANAP duty, but is fullfilling a training role with SAMSA since 2012. Unlike her predecessor, S. A. Agulhas II was designed from the beginning to carry out both scientific research and supply South African research stations in the Antarctic. 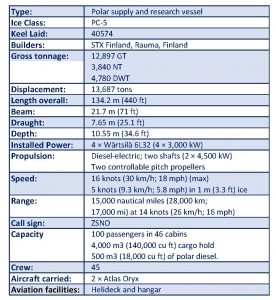