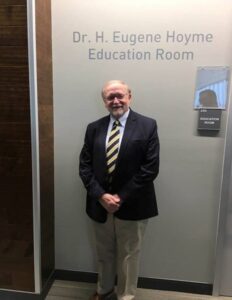 Dr. Hoyme serves as an advisor in genetics and genomic medicine at Sanford Health, the University of South Dakota Sanford School of Medicine, and the University of Arizona. He also serves as the Medical Director of the Sanford Children’s Genomic Medicine Consortium, a formal collaborative in pediatric precision medicine among seven major children’s hospitals in the Western U.S.

Dr. Hoyme has served numerous leadership roles in regional and national clinical and research organizations in Pediatrics and medical genetics. His research focuses on the clinical delineation of genetic and malformation syndromes and fetal alcohol spectrum disorders (FASD). His interest in fetal alcohol spectrum disorders has concentrated on practical, accurate, and early diagnosis of affected children. Recently, he served as the first author of revised NIH expert consensus diagnostic guidelines for FASD based on the authors’ evaluation of over 10,000 children for potential FASD worldwide spanning more than 20 years. He has authored over 400 original research articles, book chapters, monographs, electronic publications, research abstracts, and a textbook, Signs and Symptoms of Genetic Conditions: A Handbook (Oxford University Press).

The Sanford Health Foundation, a not-for-profit health care system in the USA, was founded by Mr. Denny Sanford in 2007 and has an international arm known as the Sanford World Clinic Initiative, which focuses primarily on international paediatric healthcare. Sanford Health, one of the largest health systems in the United States, is dedicated to the integrated delivery of health care, genomic medicine, senior care and services, global clinics, research, and affordable insurance. Headquartered in Sioux Falls, South Dakota, the organization includes 46 hospitals, 1,525 physicians and more than 200 Good Samaritan Society senior care locations in 26 states and 10 countries.

A plaque acknowledging the endowment was placed at the entrance of the Departement of Psychiatry on 2nd Floor of the Clinical Building and a small unveiling ceremony was held on Wednesday 25 October 2017. This is a wonderful initiative that will likely result in additional funding and an expansion of activities over time.

The main classroom is named “The H. Eugene Hoyme Education Room” in his honor. The classroom is used for lectures to Augustana University genetic counseling graduate students.

Doctor Hoyme has conducted research on Fetal Alcohol Spectrum Disorders (FASD) in the Western Cape Province of South Africa since 1999. Hoyme’s contribution to research on FASD at  Stellenbosch University resulted in him being appointed an Extraordinary Professor in the Department of Psychiatry, Faculty of Medicine and Health Sciences in 2017.