In late May, 2018, Dr Dave Drew was invited to be part of the 2018 “Spring Workshop”, an annual event organised by the editorial team of the Springer journal, Forest Ecosystems, produced by the Beijing Forestry University.  This was a wonderful opportunity to visit China, and extend our networks in that fascinating, energetic country!  He presented a paper on some of the precision modelling work he has been doing in radiata pine (see abstract below).  A large group of international scientists was present, who each gave exceptional presentations on a wide variety of topics. 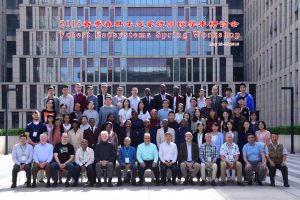 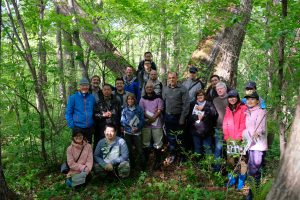 Background: Stem radial growth in in forests is not uniform. Rather, it is characterized by periods of relatively fast or slow growth, or sometimes no growth at all. These fluctuations are generally a function of varying environmental conditions (e.g. water availability) and, importantly, will also be associated with adjustments in properties in the wood formed. Stand level conditions and forest management, particularly thinning and stand density will, however, also have a major influence on patterns of growth and wood property variation. We explore how different thinning histories and/or stand densities influence these dynamics of tree growth, and associated wood property variation, in the important commercial plantation species Pinus radiata D. Don.

Results: Greater overall cross-sectional growth in thinned trees was driven mainly by two dynamics. First, the cessation of seasonal growth occurred at least 3 weeks later when trees had been thinned. There was no difference, however, in the timing of growth onset. Second, trees which had been thinned grew on more days (as much as 20% more), within the season, than unthinned trees. The rates of growth on days when growth occurred were not different, however. In this context, it is notable that in the unthinned trees experiencing the most severe competition there were strong “pulses” of growth to drought-breaking rainfall events. Unthinned trees at high stand densities also maintained a smaller, but apparently consistent, cambial zone throughout the season than thinned trees.  In all cases, the initial earlywood was characterized by uniform tracheid diameters and wood density until a point in late spring, when a decrease in tracheid diameter began, which occurred slightly earlier in the stand experiencing the highest levels of competition.

Conclusions: In Pinus radiata growing under conditions as in our study, late season conditions, particularly drought, have an important effect on the timing of cessation of growth.  Early season temperature appears to have no effect in determining timing of annual growth.  Limiting conditions during the season reduce growing duration, and thus total growth, more in unthinned stands than thinned stands.  These findings are valuable in developing new generations of fine-scale growth and wood property models.