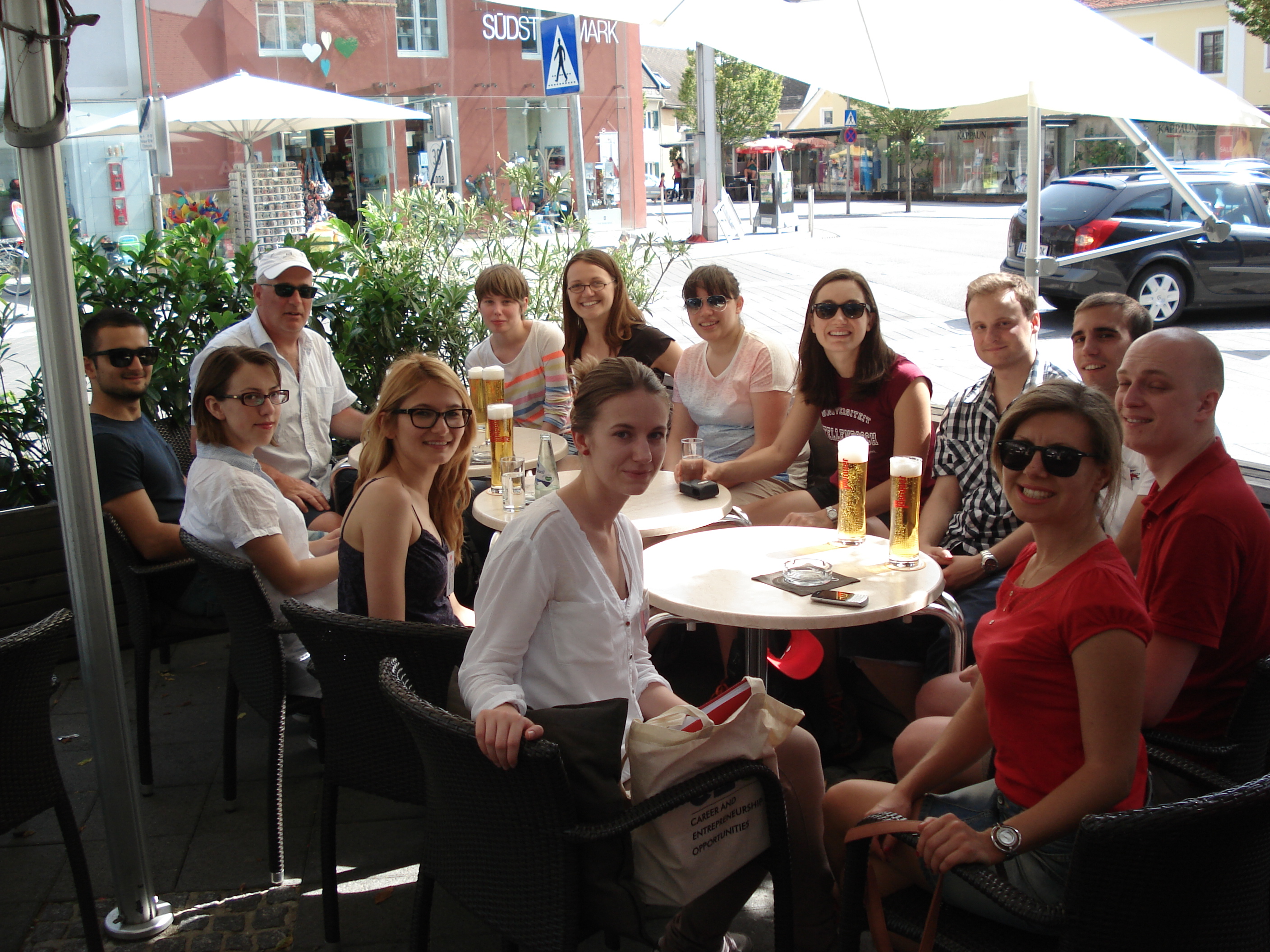 It is every South African student’s dream to go and study abroad. Unfortunately it is also every student’s reality that for South Africans this is nearly impossible. Our currency is too weak, our government does not give many scholarships and our educational system is completely different to those of European or American schools. However, I saw this near impossibility become a reality when I started researching summer schools to attend at partner institutions of the University of Stellenbosch. I sent in my video after a frustrating week of trying to find a quiet place to film in Stellenbosch. When I saw how many mistakes had been made in my video and how many students had entered, my heart sank in my shoes when I realized my chances were about as much as finding water in the Kalahari Desert.

I was completely surprised when I got the call from the International Office of our University to hear that myself and my classmate, Cecile, had been awarded the spots at the summer school of our choosing. But the fun was only beginning.

The first port of call was booking flights. Book these very far in advance, because it is very expensive to fly to and from Europe, especially in July, which is at the height of the European summer and the tourist season. I had to compromise on dates and costs and flew with Lufthansa for R18 600, because I flew back and forth on a weekend, due to time constraints and other engagements. I also opted for the more expensive flights because they landed at reasonable times. You do not want to arrive in a new city all by yourself in the middle of the night. Not ideal.

We did receive bursaries from the University which covered my tuition fee at the summer school, which was 450 Euro, and part of my flights. This helped a great deal, but varies between summer schools.

I flew from Cape Town to Vienna via Johannesburg and Frankfurt. Upon arrival in Vienna, you can take busses to the various train stations for a few euro. I then took two trains to get from Vienna to Graz to Leibnitz, where a taxi from the summer school picked me up at Leibnitz. I booked most of my train tickets between cities before the time over the internet on www. obb.at, with a credit card and printed them out. It saves time and money and prevents last-moment panicking. Trains between the big cities only go about 4 or 5 times a day and you could wait a few hours if you miss it. I arranged with the summer school before the time and they picked me up at the train station. Most summer schools do this, so make sure to inquire if you are unsure.

The most onerous part of the process is applying for a visa. For South Africans this is quite difficuilt but if you know what to do it is fairly easy. You have to have proof of bookings for all your flights, hotels and an invitation letter from the summer school as well as proof of studying at Stellenbosch. Our invitation letter from Graz University was delayed because of administrative difficulties.  This resulted in us having to postpone our visa appointment a few times in order to wait for the letters to arrive and for Graz University to inform the embassy that we are on our way. We made visa appointments at the VFS offices in Cape Town, via vfsglobal.com/Austria/southafrica. Make sure to arrive on time, have enough cash or money on your card to pay for the Visa application and bring your printed out appointment letter with you. Also arrange where to meet someone if they are dropping you off beforehand, because no cell-phones are allowed in, and it took us about an hour to go through the application process.

On the website for the Austrian embassy it says that they waive visa fees for students but they never did this for us, which cost me R1200, which I never bargained on paying for. So keep in mind that this might also happen.

The other two essentials is that you have to have sufficient proof of funds for the duration of your stay. I had my dad submit his bank statements along with a letter stating that he will support me for the duration of my trip. This was easier for me than transferring the money to my own account to prove I had sufficient funds this way.
Finally, you must prepare for your summer school. Read up about the topics, do your prescribed readings, and learn the language. I read up about the Balkans, even though I was still not sufficiently prepared as I would have liked to have been. I also learnt a bit of German, and it got me through fine, enough to prevent myself getting lost. Read up about the area so you know what you want to do in your free time, along with the weather forecast and local customs and traditions. I packed for all seasons, and it served me well.

Flying to Vienna, I was tired, had just finished a paper on company insolvency and helped my mom with her 50th birthday party. I really needed a vacation and the long travel time took its toll on me. But all of these silly worries faded away as soon as I arrived at summer school. There were 77 incredibly diverse and dynamic students from 26 countries. Most of them came from Europe, especially the Balkans. It was fantastic, to say the least. I could not have wished for a better experience. The lecturers were amazing and challenging, and experts in their fields of study.
I learnt the most from other students and chatting to them about their lives and experiences. I heard personal stories of the Balkan wars, of the current situation in Crimea, of Egypt, and of the life of a New Yorker. We formed a running group and ran in the afternoons, played waterpolo in our lunch breaks and spent the evenings after our program hanging out on the patio. I got to know people that would have never entered my realm of existence had I not gone to Austria. I met these amazing guys from Kosovo, a country of which I had heard probably once or twice in my life. The Austrians bought me beer and Shoko-bons. Waseh, originally from Afghanistan but living in the Netherlands, bought me hot chocolate and I could speak Afrikaans to him and he spoke Dutch to me. I learnt all about the European Union from Michal, a Slovakian, and Karol, a Polish Canadian. Neza taught me about Balkan politics and Sebnem taught me about Turkey’s secular state.
We had moot courts, guest lectures, a film evening, dance and karaoke nights, ate amazing food, held heated debates on everything from feral chickens to euthanasia and even visited Slovenia for a day. I learnt so much academically, but even more from the people around me. I had lunch with a woman from Croatia doing her PhD in South African literature and spent an hour chatting to her about life at home. I heard all about the Czech gangster hiding in Cape Town and about the death of Yugoslavia from Robert Austin, our lecturer from Toronto.
Cecile and I did a presentation on South Africa, which included throwing Fizzers at people. We also had a to a presentation in our summer school groups about everything that we learnt, and it was such an enriching experience presenting this with students from all over the world and who are all studying in different fields.

Be sure to go with an open mind, spend time socializing with the other students and be willing to listen to their stories. If you go over there, determined to view the world from your own perspective, then you will be disappointed and disillusioned. Be prepared to see the world as other people see it, especially concerning religious and cultural differences. It will make you a better person, as I know it did me.
I booked trains and hotels for my week in Austria afterwards, but I wish I hadn’t, as it would have made my plans more flexible. After summer school I spent 3 days in Salzburg, and two of the guys I had met at summer school came with me for the weekend. It was so much fun having them with me, and we saw so much of Salzburg in one weekend.  I also spent 3 days in Vienna, during which time I also had the pleasure of visiting Michal and Barbora in Slovakia and they showed me around all the local spots. You will most probably meet some people at summer school who also have similar travel plans to you, so keep this in mind when making plans to travel after summer school.

As I am writing part of this, I am sitting in Vienna International Airport waiting to board a flight to Frankfurt. I am tired, sunburnt, broke, wearing chocolate-covered shorts and all my clothes are dirty. I want to stay forever and I want to go home immediately as well. I made such amazing memories, I cannot imagine rocking up to a double Company Law 471 lecture at 8am on Monday morning. It seems unreal, and I don’t think I can face it. But I also know that life goes on, and my life has been made richer by the experiences I have gained in the past 3 weeks. I learnt to ride underground trains by myself at midnight, got lost and found myself again in broken German, learnt to drink beer like a true European, picked up about 3kgs from eating bread and apfelstrudel, realized all shoes hurt after about 5 hours and that South Africans are about the coolest people you will ever meet.

I cannot wait to go back. My experiences are my own and I will probably never be able to recount all of them to my people, and that’s fine. Because they are mine and mine alone, and I like it like that.
Looking back on the past 10 days since I have come home, I can honestly say my summer school experience has changed me. I am more relaxed, but take my studies more seriously. I make time to hear people’s stories more often. I am more aware of the crime going on around me, and the development that still needs to happen in South Africa. My mind has been expanded, my worldview widened and I am so happy that I get to bring some of the knowledge I gained back home with me. I would encourage each and every student to use all the means possible to go and study at a different University. Whether it be for 2 weeks or 2 years, it will do you the world of good.
The quote I based my application video on was based on the quote of St Augustine, and it said that the world is a book and those who do not travel live on only one page. That is definitely the truth, so go out there and see the world.
I am so glad to be home, but I am already planning my next trip. Definitely to the Balkans.