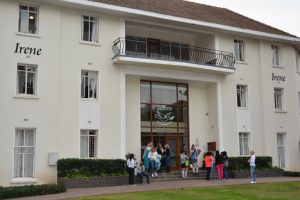 Irene In a Nutshell

Nestled in one of the most beautiful areas of Stellenbosch, Irene is located at the end of Victoria Street. It looks out on the JS Marais Park, a nature reserve, perfect for those afternoon walks and study breaks. Beyond the reserve, the stunning Stellenbosch mountains surround the area.

Irene is a warm and friendly place that Ireners call home. At Irene, we strive to be a family and a place where you will make life-long friendships. It is a place that you will sorely miss during the holidays. During the term, it is a hive of activity and excitement as we give students the chance to participate in sports, culture, academics and social activities in order for them to flourish into the best version of themselves.

Our residence was named after the Greek goddess of peace. In honour of this, every woman that has won a Noble Peace Prize is placed on our walls. These women serve as inspiration for what Ireners strive to be. In Irene we listen to each other in order to learn from each other. This allows us to live the best lives we can, in Irene, as well as on campus and our wider community. Irene celebrates each and every resident that walks through its doors. Irene is made by the people that live in the house. Every one of the 321 Ireners are important. #321rene

Irene opened its doors in 1963. It was the 9th female residence that was originally built to house 169 students. It increased the amount of students that Stellenbosch University could accommodate to 2883 people. The opening of Irene was celebrated with a formal dinner ceremony. Guests of honour such as the rector, Professor H.B. Thom, the resident head, Ms. De Lange, and the architect, Mr. Collins, attended. Thereafter, the opening of the recreation room was celebrated at a function with neighbouring male residence, Eendrag. The ceremony was rounded off with another formal dinner at which all residents of Irene were present. In 2013 Irene underwent major renovations and added a new wing to the residence. The residents’ count went from 173 to 321 residents and became the biggest female residence on Stellenbosch Campus in 2014.

Irene makes use of a values driven management system. This means that we apply these values to all activities and decisions made in Irene. Each Irener strives to embody the values of Irene in the residence as well as on campus.

I, as an Irener, pledge to be part of a community that listens to and learns from each other. I pledge to hold myself and others accountable for the environment we create. I will embrace the diversity of our sisterhood. I will celebrate my fellow Ireners as we flourish as a house. I will honour the values of Irene. I pledge to respect my Irene sisters. I, as an Irener, recognise that I am part of something bigger than myself.

Irene’s logo was updated in 2021 to better represent the house and the values we stand for. 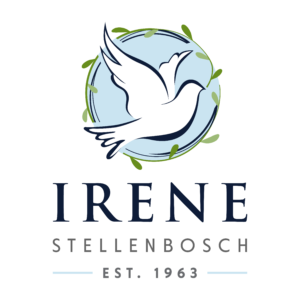 Our Irener of the week:
Last week Wednesday we celebrated a beautiful year and said goodbye to all the Ireners leaving at the end of the year. Irene Fest was a special evening filled with so much love and lotsss of bubbles💙🫧
Happy Pride Month💙
2022 House Photo💙
Our Ireners of the week🕊
Meet your HC of 2022/2023💙
Avatars by Sterling Adventures