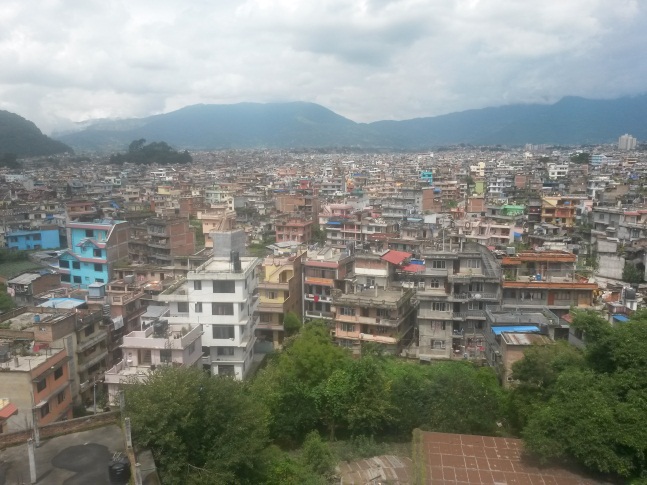 This year (2014) I embarked on a learning journey, to pursue my post graduate diploma in Sustainable Development through the University of Stellenbosch and Sustainability Institute. One of the modules I had chosen for the course is the Comparative studies for sustainable living and Economics for sustainability transitions, which took place in Nepal; I was privileged to be a part this year. This was an immersive learning experience made partially possible by the university’s Postgraduate & International Office which granted me R11 000, covering my flights in their entirety.

I had never imagined travelling to Nepal, but when the funds from the PGIO were made available, I couldn’t ignore how tangible this trip began to feel. I didn’t have all the required funds, I therefore wrote to friends and family on Facebook requesting some donations and within a short space of time, all I needed to do was to start thinking about packing my bags. The Nepali visa was a simple process of getting it upon arrival, however you have to pay for it in US Dollars, so remembering to exchange your South African rands for dollars prior to departure is a good idea.

Most of the camping gear I needed was borrowed from friends. I was trying by all means to not have to spend too much of the money raised by the Facebook campaign. I was not entirely sure what I had just signed up for, so filled with excitement and anxiousness I shopped for my groceries trying to ensure the food will give me the required sustenance, last the entire duration of the trip and not make my backpack too heavy. I settled for smash (dehydrated mash potatoes) provita, sachet tuna, oats mixed with protein powder and a cookies and cream Herbalife shake, dried mango, nuts, cuppasoup for a cold nights beverage and some multivitamin tablets. With a serious worry prior to leaving that I may not have enough and might starve. To my surprise I had more than enough food. Which was sometimes supplemented with Dhal Bhat (Huge serving of rice with a lentil or kidney bean soup) purchased from the tea houses. That was all! It sometimes came with the surprise of curried vegetables on the al a carte.

This was a trip of many first encounters for me; I had never really hiked intensely before, or camped – not in the sense of sleeping in a tent, with no access to proper toilet facilities – something that is completely out of my comfort zone. There were only two cameras within the group of 12 people, no watches or cellular phones were allowed except for journals to capture our thoughts, memories and experience of this place, we also had the sun for the time. At first I felt an overwhelming feeling of apprehension and fear that over shadowed my thoughts. The idea of going into the mountains for 21 days, not just any mountain – but the mighty Himalayas, without the ability to take pictures to share back home with family and friends nor a way to communicate with them during the trip. The idea of letting of everything I was used to having with me, and accepting that the only mode of technology was a journal and pen was such a foreign concept. However, once I got into the journaling, it was amazing how conscious I was of my breathing , I was more observant as such I was not thinking of what I would like others back home to see, however was allowing myself to go in depth with my reflections as I wrote and sometimes drew.

I had to carry my whole life in a backpack on my back, weighing about 22 kilograms (kg). This sounds awfully little when you think of it as your “whole life”, however when hiking and your whole life weighs that much you wish you had less possessions or none at all. It just made me think of how much I have in abundance back home when I consider the way I live. Referring to a 22kg pack as my whole life (shelter, food and clothes) for almost a month is really remarkable. Along with this pack I had to carry all the waste I produced while trekking in the mountains, I was amazed to see how I was able to produce less disposable waste when a conscious effort is made in relation to what I consumed, and how much packaging is on those particular items. It sometimes was annoying not being able to throw the rubbish away, as such, no longer have to deal with it. Bringing to reality just how easily we disconnect ourselves from our rubbish as soon as it leaves our hands. It soon becomes somebody else’s problem and is never thought of again.

Above of physical aspects of this journey this is an academic course.
This unique learning experience led by Luke Metelerkamp of the Sustainability Institute did not get presented to us in a conventional classroom with chairs behind desks and a power point presentation showing in the front. We had the majestic Himalayan mountain range as our classroom and home for our time in Nepal. We walked a total distance of approximately 150 km, reaching an altitude of 4000 metres above sea level over a period of 21 days. With several stops in different villages along the way, interacting with people we came across, and language often being a major barrier, it was wonderful to see how we find ways to interact with one another with such few words. One such experience was while walking one day and it began to pour with rain, we arrived in Nepal just after the monsoon season and so the weather had been really great over the previous days, however on this particular day, the rain poured so hard we had to stop walking, luckily, we had reached a site suitable to pitch camp for the night, we decided to get into a tiny house which we think was a tea house, to wait in there until the rain stopped but by the time it did stop our potential campsite was flooded. There was an elderly couple in the tea house; they spoke no word of English as we spoke practically no word of Nepali. We had a phrase book, but that still proved difficult to use. They offered us one cup of tea to share amongst ourselves, and later packed away a few of their essentials and offered us their house to stay in for the night, and to make use of their firewood while they made alternative arrangements to sleep elsewhere. It seemed so surreal, giving up your home to a group of strangers allowing them to use your water which you fetched from a river which sometimes was not exactly within proximity of your house, and use the firewood which you harvested from the forest. True generosity which spoke volumes – I have never experienced giving and sharing to that degree. The couple didn’t even accept any money we tried to give them. We put together a food basket to extend our gratitude.

The learning experience occurred through a combination of lectures, discussions, journaling and an awareness of all the happenings in my body, as I began to become fully conscious of absolutely every change that occurred, also the stark realisation that my feet are capable and continue to carry me through as I walk further into the Himalayas one step at a time with no rush, no watch to look at simply allowing the body to be. The physical aspect of this course is a major component of it, not necessarily requesting a certain level of fitness in order to take part, however it requests that you fully apply yourself mentally and physically. The mental application proved to be sometimes so hard, however you manage, all of this combined is part of the learning, all the exhaustion and discomfort that that enables for thoughts and engagements beyond my comfort zone all contribute significantly to the richness of this course.

When first arriving in Khatmandu, Nepal, my first impression was – what a chaotic looking place, no traffic lights, but lots of cars, motor cycles, bicycles and people absolutely everywhere. This presented itself as a city that has made no consideration for the pedestrian at all. Culture shock beyond my imagination However, as we moved into the mountains it was such a relief to know that there are still places in the world that seem almost untouched by the idea of globalisation, an area that carries its own identity through the beauty of it natural surroundings, and even the people living there manage to retain this sense of identity through sustaining themselves with mainly what is around them. Although a lot of people, the men in particular find themselves leaving Nepal and heading to places like Dubai, India, the United States, and Malaysia to name a few, where they become general labourers in order to earn a living and sending a remittance cheque home. Apparently this is a large contributor to Gross Domestic Product (GDP) in Nepal. I imagine that would be how some ideas of globalisation, such as school uniform, pepsi and other brands which you find all over the world have managed to manoeuvre their way into these discreet spaces.

Some may think we could have just remained home and learnt of this in a classroom in Stellenbosch; however there is something to be said about being in the space and learning about it vs. learning about it from a distance, based on literature and not having that immersive experience. Coming back to Stellenbosch, I have realised that boundaries are often not fixed, they can be pushed beyond what we often perceive as a maximum potential, and once that “limit” is been reached, that very same boundary just gets redrawn with even greater allowance for new heights to be reached and an ability for one to push themselves even further. I am grateful for the life I live here in South Africa.