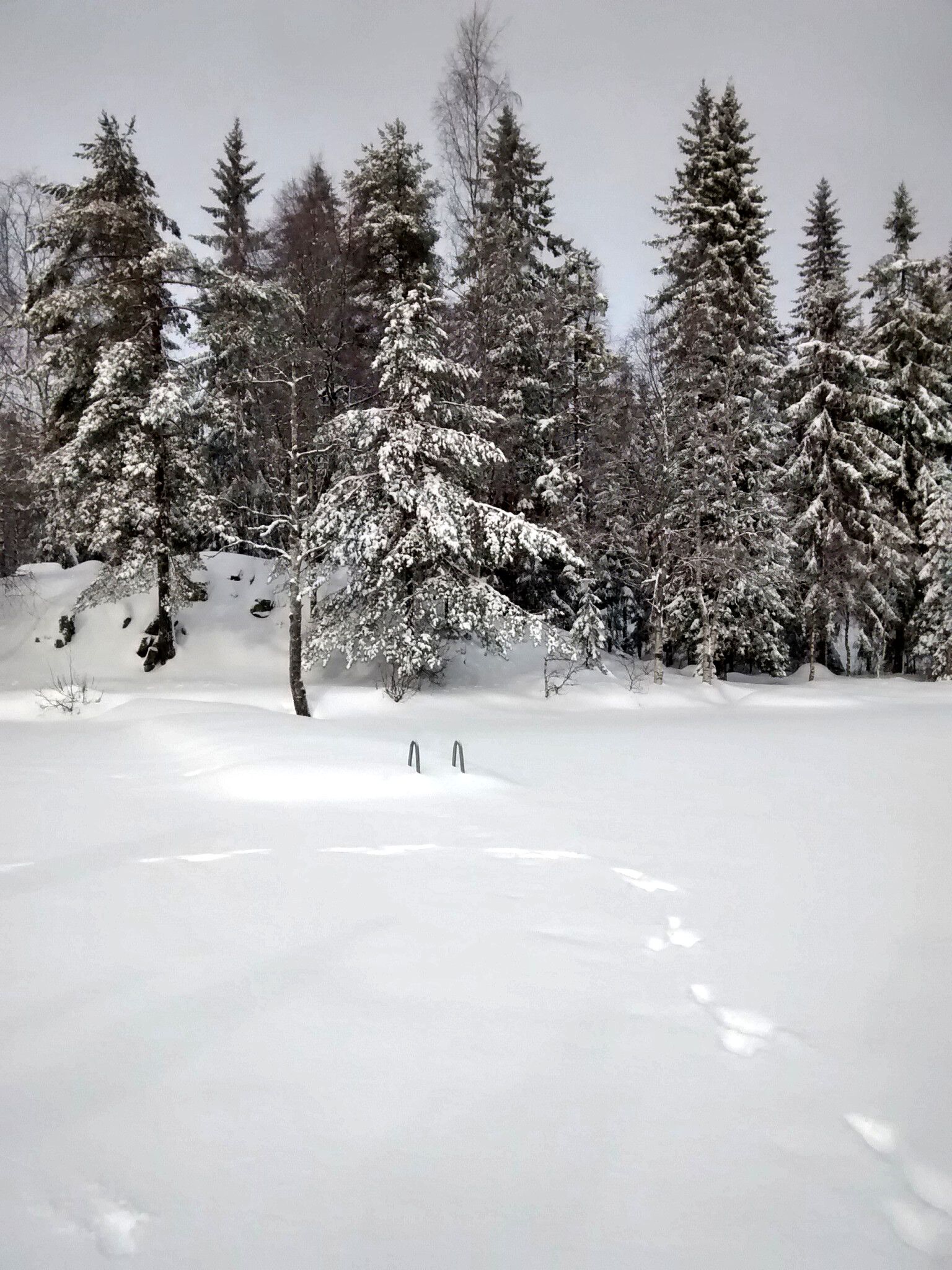 I was very excited to know that my exchange plans were becoming a reality! I waited quite long for the admission letter from UiO, and so my flight ticket was a bit more expensive than I would have liked. Maybe this was also just a fact of the time of year – I flew just after Christmas. I am very fortunate to be well-travelled so the flights and train rides were not stressful at all. I needed to be in Oslo by the 12th of January and on the way there I visited family friends in Sweden. This was great because I borrowed bedding and other household items from them, useful savings in expensive Norway. However, I did the normal thing exchange students do – a visit to IKEA. In Oslo, there is a free bus (with wifi!) that runs quite regularly from the city centre to the IKEA.

Packing for a semester at a European university is tricky, because the change in seasons is so drastic that you have to pack for an icy winter and a hot summer! I had a thick down jacket from my hiking kit and getting something like this is very advisable! Whenever I wore this I didn’t feel the cold at all. Good to know: when you arrive in January, there are sales in all the shops, so you could postpone buying a jacket or coat until you arrive. The variety of winter clothes in Norway is of course much better than in South Africa. Another handy suggestion is the vintage and second hand stores. The market for these stores in Europe is very different to what I was used to in South Africa. You can find some great bargains and some gorgeous outfits! Highly recommended to put the best vintage shops on your to-do list for every city you visit. It’s a cool way to see the city through new (old) eyes.

Winter tips: besides getting the right clothing, the right shoes is also very important. I recommend going to a shop like Sᴓstrene Grene to buy woollen insoles, these provide a useful extra layer of insulation between the ice and your feet! It’s cheaper at a non-specialist shop than at the shoe stores in the city, and works as well. Also, invest in ice grips. I bought the mini version and it worked well for me. It fits like a rubber band around the ball of your foot, so that the grip on your step is better. Many GIFs and jokes about penguin walking habits circulated on the international students’ Facebook page during the winter months. You often see people flying, sliding and pained expressions as they struggle to get back up from the icy roads!

Experience at the host university:

The penultimate phase of my trip to Oslo, Norway, started in Sweden by pulling my luggage from family friends’ house to the local station on a sleigh due to heavy snowfall overnight. What a welcome to Scandinavia!

During the first week at the University of Oslo (UiO), the International Student Reception organised a buddy week for the new international students. According to faculty, we were divided into groups lead by Norwegian students. My group consisted of students from Australia, South Korea, Japan, China, Poland, Scotland, the Netherlands, the US, and me, the only South African in the whole faculty! To be honest, I never met another South African in Oslo. We did at least one group activity per day, including a bus tour of Oslo and visiting the Viking Ship Museum.

I am studying at the Centre for Development and the Environment (SUM), a multidisciplinary research institute. I contacted them as soon as I received the admission letter from UiO and the programme administrator helped me with registration. I also signed up for Norwegian language classes. The demand is larger than the supply, so I was lucky to be selected in the lottery for a spot in a class. I really enjoy learning languages and through language, the culture. Norwegian is a funny-sounding language and the pronunciation is quite counter-intuitive but I am getting there – “jeg snakker litt norsk”.

I live in Kringsjå Studentby, a village of student flats. I share a bathroom with one person, and a kitchen with 6. My flatmates include students from Japan, Norway, Ukraine and Pakistan. It is challenging living communally, for example sharing kitchen clean-up duties, but it is also interesting. I have enjoyed discussing the Cricket World Cup matches with the guys from Pakistan. About halfway through the semester the guy I was sharing a bathroom with moved out and I had about 6 weeks of my own bathroom, which was a treat! Then one afternoon I heard the door open (what a fright I got!) and a Ghanaian man moved in. He is a real sweetheart.

From Kringsjå to Blindern, the UiO main campus, is a 10 minute ride on the metro. There is only one metro line to Kringsjå, so I sometimes have to wait a while for the next ride home. This is occasionally a bit frustrating. The benefit, though, of living in Kringsjå is its proximity to Sognsvann, a big lake, and the cross country ski tracks that start 500 m from my door! It is a beautiful area.

From April I went jogging around the lake very frequently and I loved seeing how the surrounding nature changed with the longer daylight hours and higher temperatures. The forest is really special, unlike any South African vegetation type.

Going to cabins in the mountains/forests is a big Norwegian tradition, especially going by ski. I have been on two such trips, once with the outdoor club OSI Fjell and another time on a trip organised especially for international students. It is lots of fun and a wonderful way to be in the beautiful nature surrounding Oslo. Learning how to do cross-country skiing has been challenging but totally worth it!

Being in Norway was expensive, as predicted, but I really enjoyed being here. I am also leveraging the time here to travel. One of the highlights was going to the Arctic Circle, the city of Tromsᴓ, to see the Northern Lights. Not everyone is lucky enough to have the correct combination of conditions to experience the lights, and it is expensive to do this trip, but fully worth it. My German friend Lena and I were like little girls when the lights finally made their appearance in the -25°C night. It was magical. I also travelled to Copenhagen, Amsterdam, Hamburg, Stavanger, Bergen and Hungary. I spent 10 days in Hungary during the Easter break and I really liked it. Budapest is a fascinating and gorgeous place.
Return

Since I completed my exchange in Oslo, I have been travelling in Europe. I luckily don’t have a visa expiry date looming, and am enjoying the summer. My mother came to visit for 3 weeks. We spent a week in Sweden, then 4 days in Oslo while she attended a conference and then 3 days in Bergen. The Norway in a Nutshell tour is very popular and although very expensive (for a student!), I can really recommend seeing the fjords and the peaceful Norwegian countryside. Our next stop was Poland. We spent a long weekend in Cracow, including a visit to the Auschwitz Concentration Camp sites. We spent our day there during a heatwave – Poland can get really really hot! The last part of our trip was a visit to Berlin. My mother hadn’t returned to Berlin since 1989 when my dad and she were on exchange in the Netherlands, so this was her first visit since the re-unification of Germany and the fall of the wall. We had a really good time. For Berlin I can recommend the Welcome Card and Museum Pass – useful investments if you are trying to see as much of the city as you can.

Since my mother left I spent a week in Hamburg with friends. I then worked for a language school in Belgium as an English teacher for a week. After that I started working as a part-time au pair in the Netherlands. Whilst earning some well-timed Euros, I am completing my Master’s thesis as well as looking for a job. Hopefully something turns up soon or I will return to South Africa at the end of August.

To sum up, an exchange is a wonderful experience. Use all the opportunities you have while in a new, foreign place. Your connection to home will always exist so focus on the now and the new people. Sometimes there is a time to reflect and you can still participate in Stellenbosch things. For example, I entered an essay into a Bonfiire competition in which I used my experience in Norway as part of my reflection on the xenophobia attacks back home. Here’s the link if you want to read it http://bonfiire.com/stellenbosch/2015/05/07/xenophobia-in-south-africa-breaking-news-in-scandinavia/