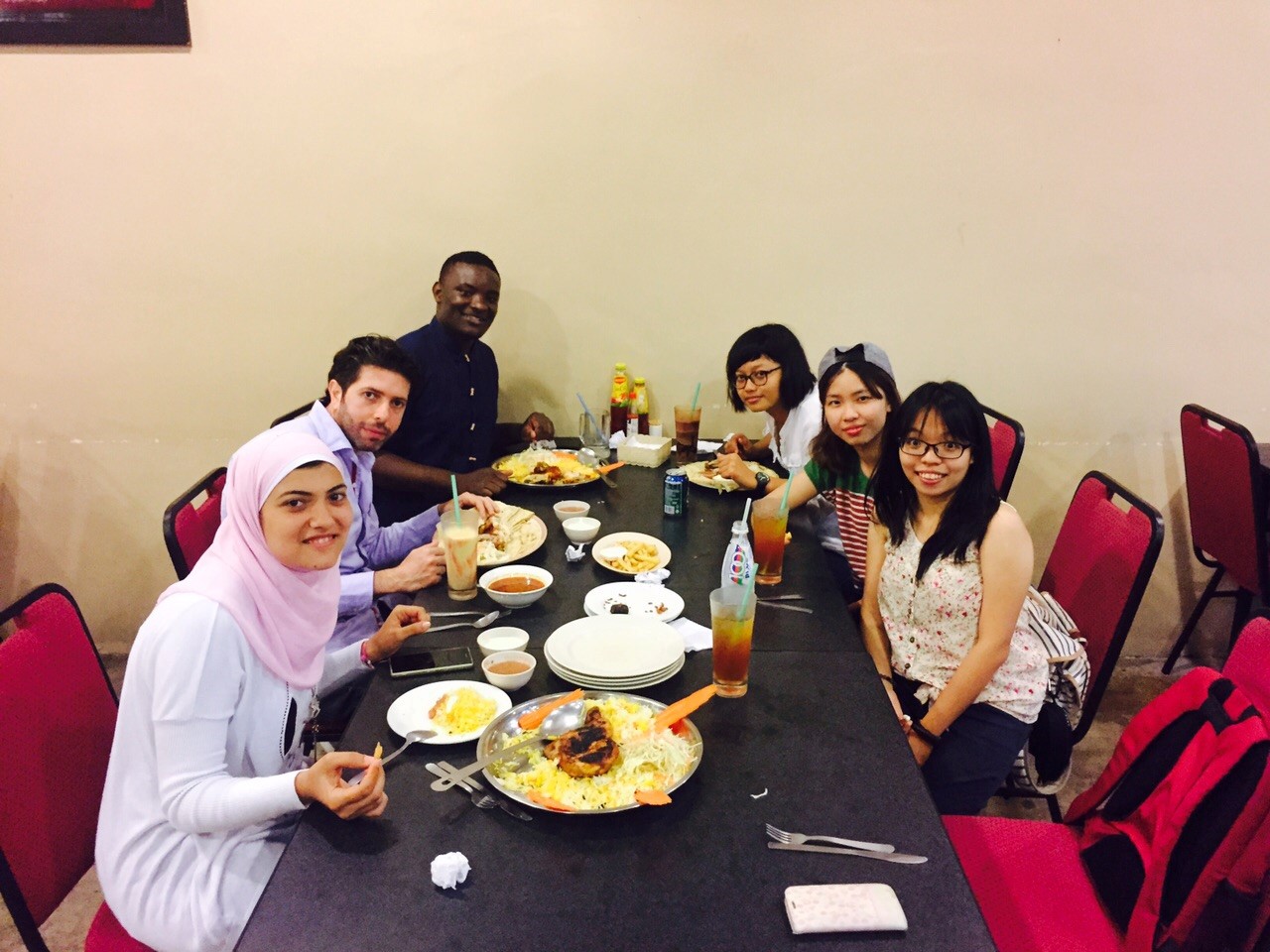 During my pre-departure I had to apply for a visa to enter Malaysia and the university helped me courier the passport to Pretoria at the Malaysian High Commission. I started applying for the visa six days before my travels because I was still awaiting a letter of invitation from the Host University and the travel bursary from our university to enter my account so that I could purchase a plane ticket and send to the High Commission as proof that I will be returning. The request period takes 7 working days, but the Malaysian High Commission did my visa under 5 days taking into consideration that my departure day was approaching and that the DHL Stellenbosch was closed on weekends and I had to travel to Paarl to get my visa and could risk missing my flight. To be honest one does not easily find embassies or high commissions with such compassion. I did a lot of research on the Country to find out what the main population was, what language they spoke and what they ate a lot. I was getting too excited as the departure day approached, because I was going to travel to my first South East Asian nation and to a country with Multi-Ethnic and Multi-cultural demographics.  I was excited to go to the country that is home to the Petronas towers as well as to the Petronas Oil and Gas Company.  One should ensure that they apply for Visa early to ensure that they are ready for their journey.

I went to the summer school for the Politics, culture, and media in South East Asia module. I have held a long passion for the East and their working culture and now to go there in person to experience what happens there on the ground is nothing short of a miracle. The classes for the module were 5 hours 30 minutes long with a 1 hour breaks which was lunch time.  The first day of class some British students and I were jet lagged because of the long distance we travelled to another different time zone.  The difference in time was +6 and this meant we were six hours ahead South African time.

The syllabus of the module included themes such as Orientalism and cultural imperialism, Rohingya people, ASEAN, Indigenous Buen Vivir: Lessons for a sustainable Future, hegemony, control and regulation, Media technology and Political change in Southeast Asia and Popular culture in Southeast Asia. Apart from the classes the university organized field trips such as visiting the capital city and taking us to different shopping centers, museums and a cultural evening at one of Malaysia’s finest restaurants called Saloma in which we were presented also with some cultural activities as we ate and all paid by the University Nottingham. The University of Nottingham invited well known lecturers such as Professor Alberto Gomes from Latrobe University in Australia. We were taught various approaches to economics and how minority groups are often neglected. We also touched on ideologies and we were also taught to develop the ability to view things from a different angle.

The difference with Stellenbosch University’s political science classes and those of University Nottingham was that at University of Nottingham it was sort of like a round table discussion. For Stellenbosch it is understandable why there is a restriction on discussions it’s because of the 50 minutes lecture period.  We also had to deliver presentations on a chosen topic but in line with the module and had to present in front of all the class mates and other students from other modules such as geography and landscape. We also had to do a research essay.  We visited places such as China Town, Petronas towers, different restaurants and climbing the Broga hill. We went to places such as the Batu caves which housed the Hindu temple. We also had the option to visit Singapore or the Langkawi islands. Some went to the Langkawi islands and some went to Singapore for one weekend immediately after class.  Each day during class time we had essential readings to do so that we were in preparation for the lecture; and this activity is just similar to that of our University. The two universities are similar to each other in that they place a lot of emphasis on research and presentation.

As my summer school and field trip was coming to an end, I felt sad and wanted to stay in Malaysia for the rest of my holidays because of the beauty of the country. Going to Malaysia and triggered the way I saw the East and made me look at the East from a new angle. It helped me understand that despite the rapid growth of globalization some cultural identities were still identifiable. Malaysia helped me cherish the diversity we have in South Africa. When I returned from Malaysia I fell sick of malaria whilst visiting my family in Botswana and I was put on treatment and I wish to urge everyone that goes to Malaysia to take pre-malaria drugs to avoid getting sick. The University of Nottingham has inspired me to apply for a longer exchange to another university.  I would also first of all thank everyone who made this trip possible, to my university for giving me the travel bursary as well as the University of Nottingham Malaysia Campus for making me the 3rd World Scholarship Recipient for Summer school and for hosting us. One wish for me is to see our university making the university of Nottingham a partner institution so that we would be able to exchange knowledge and be able to partner in research activity to do breakthrough studies in fields such as science, Social Sciences as well as other faculties.