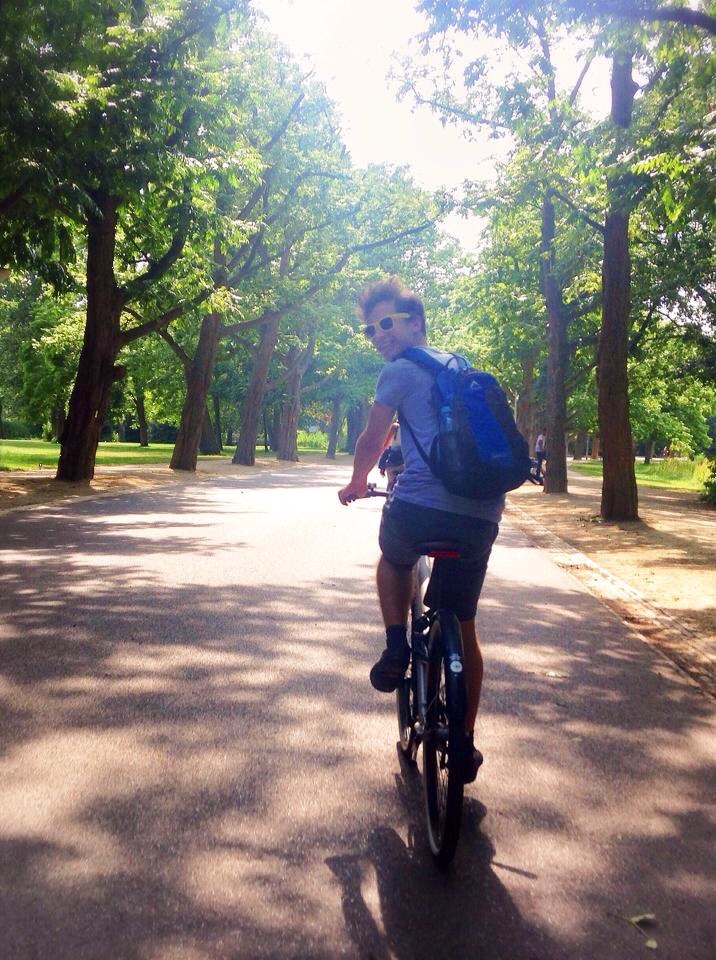 I decided to go to Amsterdam for two reasons. Firstly, the course I attended, International Criminal Justice, appealed to me. Secondly, Amsterdam is one of the most cosmopolitan cities in the world,
with people from around 125 different nationalities living there. Attending the summer school also gave me the chance to travel alone through Germany for another two weeks at my own expense (something I’ve wanted to do for a long time).

I decided in January this year that I wanted to go to a summer school in July. I spent many hours scouting the different options on the International Office (PGIO) website. I also finalised most of my application before the academic year started. I highly recommend trying to finish your application in the holidays, because it gives you more time for other things during the term. The video took much longer than I expected. Start working on it early to avoid a sleepless night.

The Schengen embassy where I applied for my visa was highly efficient. It took about two weeks to get my visa and it is, by some luck, valid for a whole year. I had no trouble in that department.

I can vouch for the use of a cash passport when travelling in Europe. It’s cheaper than carrying a debit/credit card and much safer than cash. However, make absolutely sure that your card is activated by registering it online before leaving. My bank made a mistake with mine and it left me stranded at Schiphol airport for 5 hours.

It is possible to attend this summer school for quite cheap. Accommodation and tuition is free thanks to negotiation by the PGIO with the Vrije Universiteit Amsterdam (VU). The PGIO offered
me a travel bursary that covered the flight ticket and visa. In my course we were given an OV-chipkaart to use the local public transport, which lasted for the two weeks. Note that students in
other courses did not receive one. Overall my only big expense was food.

I would like to share some general advice for travelling Europe which I picked up in my month abroad. Firstly, read lots of online blogs. There are many little hacks that make travelling easier, from packing light (I only carried an 8 kg backpack for a four week trip) to getting cheap flights etc. I found www.thesavvybackpacker.com especially helpful.
It might be summer in Europe in July, but that does not mean it will be warm all the time. Take a rain jacket with. It rained quite a bit while I was there. It can also get cold, so at least one pullover and light jacket is essential.

As far as travelling guides go, leave the heavy travel guide books at home and download a travel app instead. I can highly recommend the app stay.com for iPhone. It’s free, has an offline map and guides written by locals for more than 200 cities around the world. It took me to many interesting places I would not have found otherwise.

If you plan to do some travelling in addition to the summer school, consider investing in a Eurail pass. It is by far the cheapest way to travel across Europe, especially if you want to cover a big distance. Also, travelling by train is a lot of fun.

Experience at the Summer School:

The VU summer school was an unforgettable experience. I was in a class with 25 fascinating people from all over the world. The countries represented were South Africa, Australia, England, Scotland, the United States, Canada, Germany, Iran, Syria, Egypt, India, Brazil, Italy, Guatemala and Mexico. This diversity makes for highly interesting class discussions. However, perhaps the most influential part of my education at the VU came from the conversations I had outside of class. Some were only humorous misunderstandings between different cultures. For example, nobody knew what the Australians meant with the word “Maccas” until they explained that it’s Australian for McDonalds.

Others were deeply philosophical conversations that always lasted into the early morning hours.The course was presented by mostly Dutch lecturers and also representatives from various institutions. Discussions focused mainly on how perpetrators of war crimes, crimes against humanity and genocide can be brought to justice. Lectures lasted from about 9:00 to 13:00 with a 20 minute break in between on most days. Each lecture was presented by a different person and covered a seperate topic.

We had lectures on for example, criminal liability of military commanders and politicians, the challenges facing the International Criminal Court (ICC) and the role of NGO’s in international criminal justice. The latter was presented by a representative from Human Rights Watch. For me, the absolute highlight as far as the lectures were concerned was a workshop on cross-examination presented by Judge Howard Morrison of the ICC. I don’t think I have ever been more inspired than after that lecture to pursue a career in law.

In addition to lectures, we went on many different excursions. We visited the Hague on two occassions. The first was for a tour of the ICC. The second visit was to the International Criminal Tribunal for the former Yugoslavia (ICTY) and the Peace Palace. We were fortunate to attend the trial of Ratko Mladić at the ICTY. Another highlight was playing paintball according to the rules of war as stipulated in the Geneva Conventions of 1949.

This course may sound very law orientated and in some way that may be true. However, that does not mean that this is a course only for law students. People in my class had various backgrounds, including political science, criminology, psychology and international relations. There were even a few engineering students. They all made valuable contributions. I believe it is herein that the value of this course lies: it takes an inter-disciplinary approach to the problems of international criminal justice, drawing on the knowledge from not only lecturers, but also students from various disciplines. The examination consisted of a 1000 word essay and a 15 minute group presentation.

Classes at the VU are very informal. Lecturers expect you to address them by their first names. I found this a refreshing change from Stellenbosch University (SU). It was so much easier to engage
in debate with lecturers because there was no the need to load one’s sentences with honorifics. Classes had a structure similar to a well-taught tutorial at SU. In other words, the lecturers steered
the ship, but the students had to do most of the rowing.

Travelling alone on a foreign continent has simultaneously been one of the most exhilirating and terrifying experiences of my life. Terrifying, because there was nobody to have my back when I ran
into problems. Exhilirating, because I had the freedom to do whatever I wanted, without ever having to take others into account. I would like extend my gratitude to the PGIO for making this experience possible.

I have been back in South Africa for some days now and I am suffering from what is called reverse culture shock. I have gotten so used to life in Amsterdam that it takes time to adapt back into my own society. I have grown immensely as a person and discovered a lot about myself. However, I am unable to describe this feeling to the people around me. I have come the know this as an unavoidable side-effect from travelling. I have also discovered that I thrive in an international community like that of a summer school. I will definitely apply for a semester exchange later in my studies. I am also considering the
possibility of studying international criminal law in more depth one day. The issues are among the most enthralling I have ever encountered. Before I started the course, I had a basic interest in
international law and human rights. After attending the course, I now find myself reading news reports about ongoing international trials and conflicts most mornings.

During my time in Amsterdam, I have come to the realisation that Stellenbosch is a very small town. The longer one stays here, the  easier it is to get caught up in a bubble. It is necessary to be reminded of the rest of the world regularly. Perhaps the most valuable asset I received from Amsterdam is an acute mindfulness of things around me. I have been living in Stellenbosch for almost in 20 years and it feels like I am noticing some things for the very first time.

But Amsterdam is not all sunshine and rainbows. In fact, the sun hardly ever shines properly in the Netherlands. Being away from South Africa for a long time has made me appreciate my home anew.
I now appreciate every time I feel the sun on my face. I relish the complexities of the society that I live in. I adore the inherent opportunism of South Africans. It may not always be easy living in
South Africa, but it is definitely worthwhile.

As I write these words, I am filled with a deep nostalgia. What truly saddens me is not the fact that I am no longer in Amsterdam. I can always try to go back one day. What is hard to accept, is that the
special group of people I was with is now once again scattered all over the world. Chances are that I will not see some of them ever again. This is the rollercoaster of emotions that constitutes a summer
school. An absolute bliss is eventually replaced by a great nostalgia. Was it worth it? Absolutely. My antidote is to remind myself of a saying by Dr Seuss: “Don’t cry because it’s over, smile because it happened.”