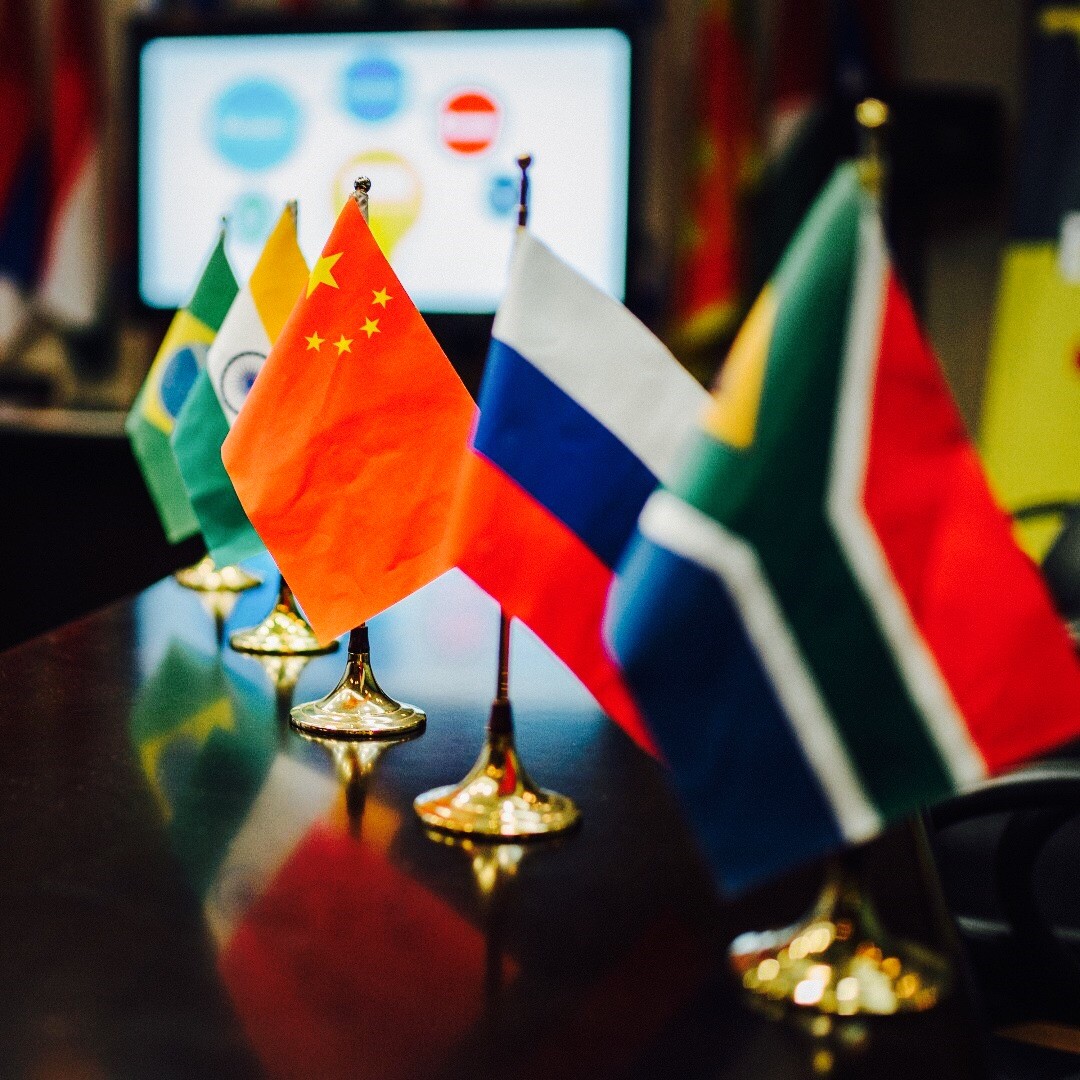 Upon receiving correspondence from Fudan University that I have been accepted to attend the BRICS Shanghai Summer School Program, I was faced with much uncertainty regarding financing the trip. In the middle of that uncertainty however, SU International was a space where I could experience bouts of positivity each time I went to enquire about the possibility of actually going on the trip. From this process SU International afforded me a travel bursary. It was at this point that I began feeling excited about the possibility of going abroad. When all calculations were done I realized I still needed further financial support to cover all the trip logistics. Again, after motivating why I should be afforded an extending grant, I felt hopeful that Stellenbosch University would find it necessary to invest in me. In this waiting period I was in constant contact with both Fudan University and SU International. From Fudan’s side I had to relay to them that I have all the intentions to attend the program, however I needed a little bit more time to sort out the financial part in order to pay for tuition and the travelling costs. What was really encouraging during this time was the responsiveness I received from SU International.

Soon after, it was communicated to me that Stellenbosch University is granting me a further subsidy to ensure that the BRICS Program will not be a missed opportunity for me. Finally I was now sure that I am definitely going abroad and attending the program. At this point I could now go ahead and apply for a visa. I received so much help with transportation going to Cape Town at the Chinese Visa Center. Three days later, I was able to go pick up my visa with the transportation that was organized by SU International. Now the excitement had fully kicked in as I only had a few days between picking up my visa and leaving for Shanghai, China.

This was the first time that I travelled abroad without a scholarship, but I am so thankful to SU International for affording me an opportunity to deepen my insights.  The level of personal attention that each student receives from the office is truly encouraging and makes one realize that the staff are devoted to student mobility. During this time this was highlighted to me. 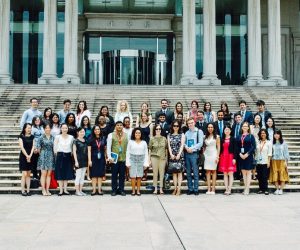 The Shanghai Summer School BRICS Program offered by the Center for BRICS Studies at Fudan University commenced on July 6, 2017. I had no idea about the depth and the prestige that this program holds. I was stunned at the caliber of lecturers we engaged with. The program was thoroughly planned and modeled itself as a rich learning experience. The BRICS Program had a twofold curriculum namely, Global Governance and Cooperation among BRICS, and China’s Politics and Diplomacy. The first part of the program focused on Global Governance and Cooperation among BRICS where we covered topics pertaining to the future for South-South Cooperation. The themes that were explored in this respect where the restructuring of global governance, global multi-polarity, the global financial reform and development cooperation. These theses were coupled with areas of global energy cooperation, the international cyberspace governance and data sovereignty of BRICS. This was a unique learning experience as the learning environment was more of a think tank model where we had to prepare and acquire knowledge for the class in order to explore the topic and provide a group presentation at the end of each day providing advice and proposing ideas about the topic at hand. 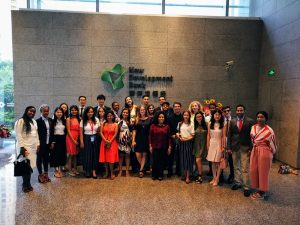 The second part of the program focused on China’s politics and diplomacy where we looked at China in context of the BRICS configuration and the relationship China advances with each BRICs country. This part of the curriculum was also exciting as we got to be critical of China’s position and influence within BRICS. Usually classes were in the form of lectures in the first half of the day, and after lunch it was discussions on the content that was presented to us. In this process of learning and deliberating we had to write two papers on the two parts of the curriculum as a form of assessment. The first paper was on the pragmatic economic and trade relations among BRICS countries, and the second paper was on the diplomatic relations China has with your country, in my case, I wrote about China and South Africa. 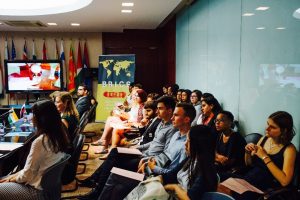 The program was an excellent platform where young activists from the fields of International Relations, Economics and Law came together to debate about our divergent political realities, but also our converging economic interests. It was a platform of knowledge exchange and cultural appreciation. Alongside our studies we had the opportunity of experiencing the culture of Shanghai from day to day living, to visiting significant cultural sites around the city. Shanghai is so rich in vibrancy so much that sometimes I just stopped to appreciate the moment of experiencing a completely different city and university culture.  One thing that I appreciated of Fudan University is that the social culture and experience was not in isolation form who the students were, but rather a space for them to reaffirm themselves beyond the academic life. I guess this is because China in comparison to South Africa is a homogenous society and is not grappling with challenges of diversity.

Nothing energizes me like being engaged with other youth activists about issues that matter. My experience abroad reaffirmed to me that youth should be empowered and given the power to lead.
From the program I realized that young people are a segment of the population who really care about the development and future of their countries. My concern for the future of South Africa is typically from a social justice point of departure, but with the program I have come to understand that I can actually intersect my social justice activism with my love for the political economy of development. In this way I think I stand a good chance of making a meaningful and tangible contribution in the long run and as I move into building a career. The learning experience that I received from the program highlighted for me that South Africa urgently needs to address its leadership crisis and adopt a new energetic leadership culture if we are to compete globally and catch up with other advanced developing countries. South Africa needs vibrant leadership to propel it forward as a gateway to Africa, but also as a global player. From listening to lecturers speak about development and the future of South-South cooperation and being equipped with that understanding, my perspective of South Africa is that it needs a new generation of decision makers and a new crop of leaders. I come back very agitated and frustrated about the current political climate of South Africa and makes me think that we are the ones we are waiting for. There is so much positive development taking place within the BRICS configuration, but I wish that South Africa was at a better place right now.

With that said, I feel that the trip has inspired me to begin to really think about where I start my career as an International Relations student. In other words, what areas of IR do I want to pursue and start building on that. As it stands right now, political economy of development, BRICS and China-Africa relations is what excites me within IR and the BRICS program gave me much insight into these areas of enquiry. I think that connecting with other young people on the program has encouraged and inspired me to have a desire of studying further. I am currently contemplating pursuing a Master’s degree next year to advance myself but also to gain deeper knowledge and understanding.

From this experience I recognize that traveling and going abroad is imperative for personal growth and deepening insights and for exchanging views and opinions. Equally important is seeking an opportunity to study outside of your own country. I realize that being outside your norm stretches you and opens up your mind in a critical sense and shapes you into being a global citizen. From here onwards I do wish to study abroad, guided by a global outlook for local input.

One thing remains clear to me from this trip and it is that I love South Africa and I want to serve my country with integrity with other young people who feel the same way.