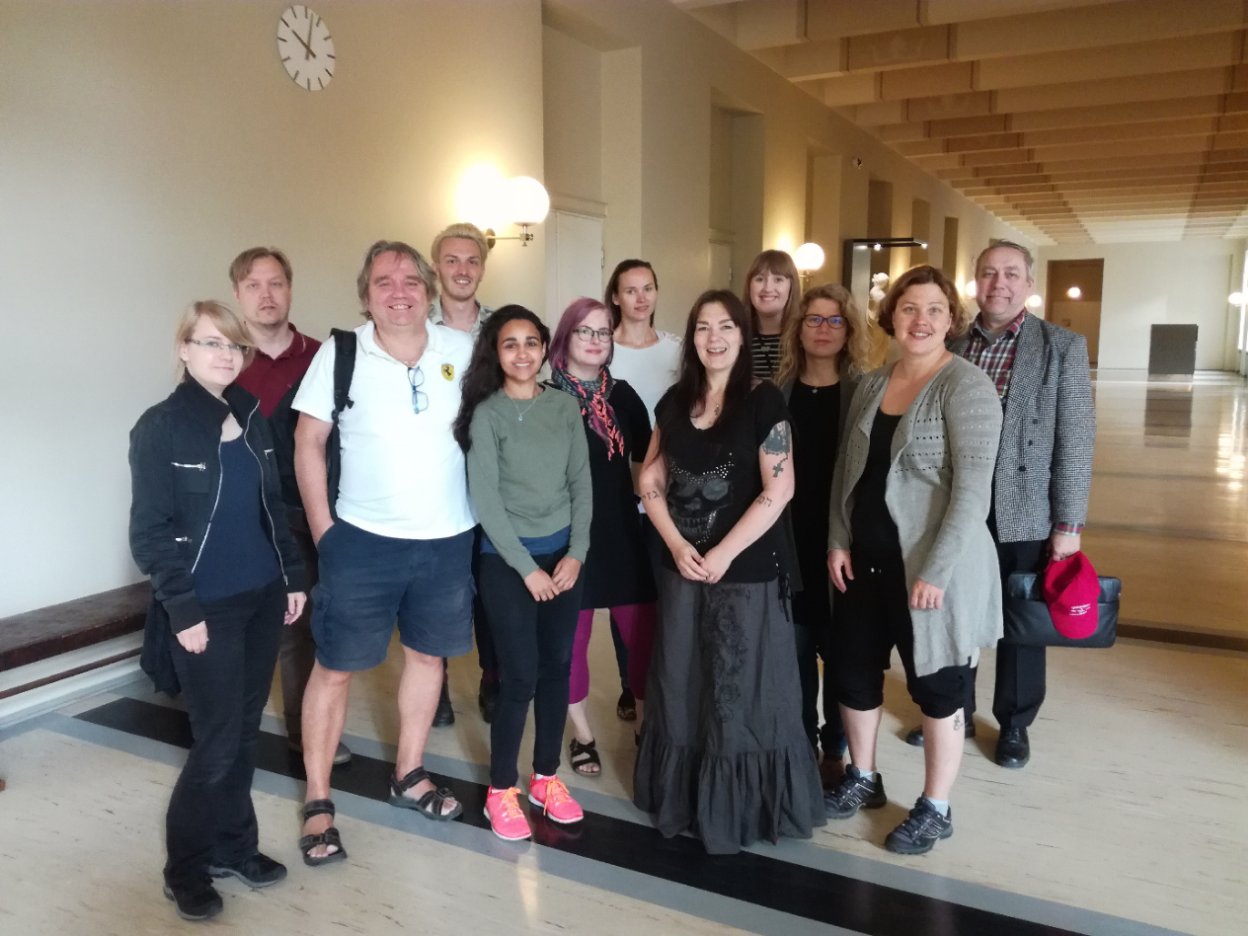 I got news of being selected to attend the Helsinki Summer School at the end of April and immediately starting wondering what needed to be done. Fortunately, I had more time to prepare, as the Summer School was only scheduled to commence the second week of August, whereas other Summer Schools were held during June and July. Stellenbosch University International (SU International) hosted an orientation session in May and it was quite helpful, despite my having travelled to Europe before. I consulted the Finnish Embassy’s website (http://www.finland.org/Public/Default.aspx) and emailed them as early as 16 May.

Because I had been to Europe at the end of 2016, hence I’d already acquired a Schengen Visa, I could courier my application form, and accompanying documentation, to the Finnish Embassy in Pretoria, otherwise I would have to submit my application personally. They are usually quite busy during Europe’s summer months (May-July) but there was no need to be concerned about delayed responses, as they are quite organised and helpful. I accidentally paid the visa application fee (not necessary as I was going for study purposes), however, they kindly refunded me. I would advise that any student going be sure of all the documentation required for your application, as you don’t want to waste money by having to apply twice, etc. One document I completely forgot to obtain was a letter stating that I’d been granted permission to leave my studies in South Africa but that I’d return. This is where the kindness of SU International was much appreciated, as it was attended to swiftly.

I also learnt that SU International required an official letter of acceptance from Helsinki University AND a signed bursary offer before the travel bursary could be paid out to me. This was important, as I wanted to use the travel bursary to purchase flight tickets and not my own. I also knew that the sooner I booked my tickets, the cheaper they would be. I intended on purchasing flight tickets from a travel agency but found the same tickets on the airline’s website at a cheaper price; this helped cut costs. I would advise anyone going to consider whether they would like to extend their stay in the host country, or Europe, before or after the Summer School. I have a friend living in the Netherlands and we agreed to spend a weekend together after my summer school programme. It makes sense to stay in Europe, if time and finances allow, since it’s so easy to travel between the countries. One should, however, bear in mind how many countries you’d like to visit, as this determines where you apply for ‘single-entry’ or ‘multiple entry’ status for your visa. In this case, proof of accommodation (for when you are not staying at that seen to by the host university) would need to be provided to the Embassy. I, for example, made a booking via Booking.com for the dates that I was not staying at the hostel. Perhaps it would be a good idea to keep note of the dates that the host university has indicated provision of accommodation. 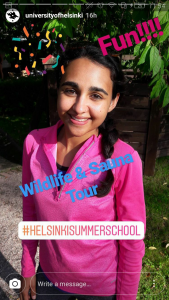 I would also recommend getting in touch with the rest of the SU students attending the same summer school, just so that you can share your progress and familiarise yourselves with one another. Myself and the other students going to Helsinki arranged to meet once in June and we had a WhatsApp group that we used to share questions, concerns, tips and updates. Though we mostly went our separate ways once our courses commenced, don’t underestimate the value of sharing and contributing to another SU student’s experience. Lastly piece of advice would be to read the prescribed reading material before arriving at your summer school, so that you don’t waste time reading when you could be out exploring!

Helsinki University, one of the best research universities in the world, was very organised and their facilities are great! I was impressed by the collaborative workspaces and the unique culture that exists within university. However, I maintain that this needs to be experienced to be understood. Very different to Stellenbosch, Helsinki University was something to get used to, but this was easier than I’d expected, especially considering the amicable, inclusive and participatory nature of the course. The content of the course was challenging, especially personally, and the standard of content, guest lectures and conversation was high, as can be expected in a country renowned for its education system. 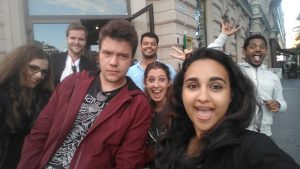 I attended the Faith & Globalization course (one of the longer short courses), my first choice. The lecturer and course coordinator were both from the University of Helsinki’s faculty of Theology and most of the class comprised of Finns. Besides myself, there were only two other students from abroad, however, the course allowed for a lot interaction with Finns of various ages. The classes became more interactive as the course progressed and some heated debates took place, as one would expect when discussing religion and conflict in years past and the 21st century. On average, I had about 4 hours of class per day, varying between lectures with our assigned lecturer and guest lectures from across the globe. Most strikingly, was the level of discussion and Q&A encouraged within the class. Towards the end of the programme, each student had to present on a topic of their choice, related to the themes of the course and prescribed literature. Though I was quite nervous, the friendly and attentive atmosphere that the course had maintained throughout, made presenting at an open symposium less daunting. As part of the assessment, we also had to submit an essay relating to our presentations. Topics ranged from Christian-Buddhist Interfaith Dialogue, Religious Tolerance, American influence of LGBT rights in Uganda, Buddhist violence and the role of the church in South Sudan. 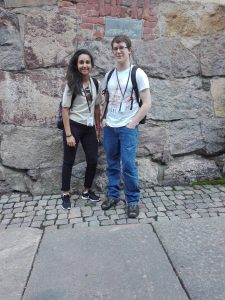 What struck me was the sense of equal and mutual standing between students and lecturers at Helsinki University. The average age of most students at Stellenbosch University is a lot younger at Helsinki University, where students of various ages are in the same class and age seems to be less noticeable in the classroom. Furthermore, I noticed that discussion was integral to the lectures and these discussions are well-facilitated. Though my experience is distinct to that of summer school, these differences were noticeable. A few classmates often had lunch together, at UniCafe (the University’s cafetaria), where the conversation would continue to be educational and insightful, from and for Finns and those of us from across the world. The Finns, though reserved, are not cliquey, as some would say Stellenbosch can be… Perhaps this is because there is close to little diversity or multiculturalism? These evoke interesting thoughts to ponder. 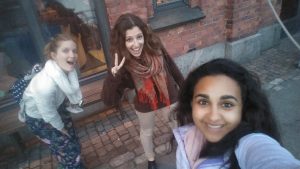 Outside of the classroom, there was more than a fair share of play. The Helsinki University Summer School team made my experience much less stress-free! They devised a social programme for the duration of the Summer School and communicated very well, informing participants of any changes and new events, even that we could obtain free access to events in the city as part of the celebrations of 100 years of independence! The Summer School also shared tips and information on various things to do and places of interest; vintage and second-hand shops to visit, things to do and places to visit, social programme activities, music shops to visit and outdoors activities to enjoy. These suggestions definitely piqued my curiosity and were worthy of exploring! Amongst (many) other things, I joined the walking tour through Helsinki, the screening of a Finnish film called “Tale of a Lake”, a ferry trip to Suomenlinna Island (a sea fortress) and went on an unforgettable excursion to Nuuksio National Park in Espoo (next to Helsinki).

I was surprised at how my love for a place and people could grow in three weeks; it was strange to have gotten so attached to a place that was so opposite to life in Stellenbosch. I was confronted with as much of the ‘Finnish reality’ as a Summer School attendee could be and was constantly drawing comparisons between Helsinki and Stellenbosch, or Helsinki and the Western Cape. This also led me to draw comparisons between Finland and South Africa, though I knew I could not generalise.  I ended off my time in Helsinki in a different part of the capital (Lauttasaari) with my South African-Dutch friend whom I met in Stellenbosch during my undergraduate years. During that weekend, I was more of a tourist than I had been during my course. We spent the weekend dancing, travelling, sightseeing and chatting about Finland. I do not fare well with change and, therefore, I was somewhat dreading the return to normality in Stellenbosch. It helped to have someone to process my pending return with, especially someone who loves South Africa. Before leaving for Finland, I was told that there are phases to one’s traveling; the hype/excitement, followed by the realisation that you’re in a foreign country and resulting longing for friends and family, then adjusting to life in that country and an appreciation for what it has to offer and, finally, a recognition that perhaps it is indeed time to go home. On the Friday before my departure, I was sad to be leaving but, as I started physically preparing to leave (packing my bags), I subconsciously mentally prepared for my return home too.

From the moment that I arrived in Helsinki, I had been comparing South Africa to Finland. As I spent more time with Finns and immersed myself into the Finnish way of life (as much as my semi-conventional/conservative self allowed me to), I was struck by the contrast between Nordic Finland and South Africa, between Finns and South Africans (as if we’re one homogenous group?!), Finnish nature and scenery and that of South Africa, or at least the Cape, the welfare provisions provided by the Finnish government and the inequality that exists in South Africa, the public transport systems, the diversity of religion, parental leave and social norms and social behaviour.

As a Political Science student, I considered myself quite aware of various inequalities that exist in South Africa, however, my stay in Helsinki accentuated this and I was constantly, ignorantly and frustratingly, asking myself why things in South Africa cannot be as they are in Finland. I love South Africa and I recognise the responsibility I have in contributing to the country’s wellbeing and playing my part, however, I know that South Africa faces unique problems and these need to be approached in a unique manner. Initially, I thought that Helsinki would have very little to offer me but I was pleasantly surprised and humbled. As I departed Helsinki, I wondered how I would adjust to Stellenbosch and I could not have had a better return. Time with family and friends, driving along the winelands, bearing gifts from Helsinki and sharing my stories all helped me adjust and I found myself returning with a new sense of self, perhaps a better version of myself. If the experiences we have and the memories we make contribute to who we are and how we make decisions, then I would say that my trip abroad was a remarkable success. Though a love for travel and adventure and a sense of my horizons being broadened, I returned to South Africa with a greater sense of appreciation and a deeper acceptance of my life here and who is in it.