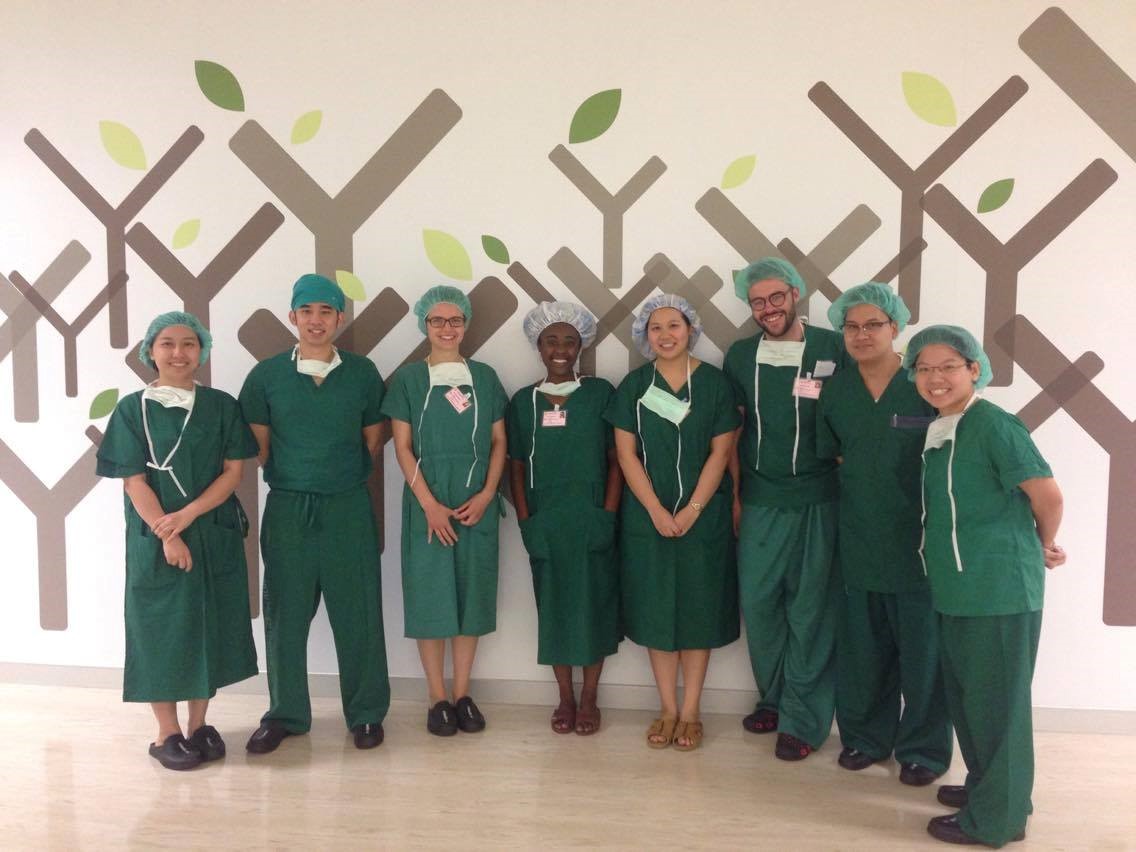 Planning my Thailand elective was by far one of the most challenging things I have had to do. I had decided at the end of last year already that I wanted to do my 5th year elective in Thailand so that gave me a nice head start. A friend of mine who was planning on doing his elective in Thailand too, suggested a university that we could apply to. So, we decided to do our elective at Chulalongkorn University in Bangkok. The hospital was established in 1947 and consists of 21 medical departments. There are 1500 beds, 409 physicians and 1177 nurses. Our decision though was mainly based on the fact that the hospital is located in Bangkok, meaning most of the people we would encounter would be able to understand some basic English and so communication would not be a huge obstacle.

We applied to the university in March. Correspondence with the university was very pleasant as the people in charge of the international affairs office were very efficient. They responded to emails timeously and were very helpful throughout the preparation of the trip. I had initially applied to do my elective in plastics and reconstructive surgery, but was unfortunately told that the spaces had been filled well into the year. I then decided to apply for the anaesthetics department. It took about a month for the department to respond.

I visited a travel agency and preliminarily booked my flights. Due to the elective period coinciding with the school holidays, the flight prices were a lot higher than anticipated. I also started applying for the visa with the help of an agent recommended to me by the travel agency.

I then had to figure out how exactly I would be funding this trip. Luckily the cost of living in Thailand is low and the rand is stronger than the Thai baht which meant I wouldn’t need a large sum of money as pocket-money. I however still had the accommodation fees (I applied to live at the dorms in the university,) the course fee, my visa fees (I am a Ghanaian citizen and thus needed a visa to visit Thailand) and of course the money for the flights. As any student, would do, I first approached my father. I decided to apply for a travel bursary when it became clear, close to the elective that due to financial constraints there was a possibility I wouldn’t be able to do my elective in Thailand as planned. I had heard about a travel bursary from a senior student a year back, but was never given details about how to obtain one. I then visited the elective office at Tygerberg campus and was told there were no such bursaries.

Luckily one of the doctors involved in student affairs was in the office next door and she told me about the travel bursary and how to apply for it. I was very surprised to hear about it, because not many students at Tygerberg campus know about it which is sad because many deserving students would benefit greatly from such an opportunity. Applying for the travel bursary was a last resort measure for me, because if I had not been awarded the bursary, I would have missed out on such a life changing experience. I was awarded the travel bursary and so my next and biggest obstacle was having to pack for the trip of a lifetime.

All in all, I would advise one to apply for the spot in the programme they want as soon as possible to avoid missing out on a space. One must also have a second and probably third option as well, should one not be accepted for their first option. Then, book flights as early as possible and try to avoid traveling during the school holidays if possible as this cuts down considerably on costs. Thirdly, apply for your visa as early as possible and account for possible delays at the visa office. I booked my flights via STA travels and one can ask them for an agent to assist with applying for visas.

Experience at the host university:

Before departing for Thailand, I was sent a map of the hospital I would be working in, my timetable for the first week, information about the university, where to find my dorm and the most helpful was instructions on how to get to the university in Thai, so I could just hand a taxi driver the sheet of paper and they would know where to take me. I found the latter very helpful, as most of the drivers in Bangkok do not speak English.

Upon my arrival at the university, I met many friendly students who took me to the accommodation office. The ladies at the accommodation office were very helpful and could speak English which was nice. They helped me with my bags and took me to my room. My first day at the university had been stress free which I was very grateful for. The following days weeks and month were just as stress free and lovely.

I was taken to the international office where my documents were processed and where I was given my badge and other necessary information. I was then taken to my department and introduced to the secretary of the department as well as to the other three students from New Zealand, Poland and Greece. I would be working with them for the next month. Each day we worked with a different anaesthetist, in a different theatre. We were given a timetable at the beginning of each week and were given directions to each theatre. One of the girls in our group could speak Thai which was very helpful because although we were in Bangkok, some of the people we encountered couldn’t speak English. Every doctor we worked with however could speak English which enabled us to work well with all our doctors and we could ask questions and learn.

Thailand is a so-called developing nation. However, their government hospital compared to Tygerberg hospital or any tertiary government institution in South Africa is mind-blowing. The hospital is about 10 times bigger than Tygerberg hospital and each department has cutting edge technology. The hospital we worked in was a government hospital, but looked better and was better equipped than most private hospitals in South Africa. I was very thankful that I ended up in the department of anaesthetics instead of plastics and reconstructive surgery, because I ended up working in so many different departments, including plastics and reconstructive surgery and I ended up seeing so many different procedures each day. I got to see different techniques being done and got to see certain medications and equipment which would usually be reserved for the private sector in South Africa, being used daily in Thailand.

All the people I encountered at the university were always ready to assist and were very friendly. We did not work over weekends and so I got many suggestions about what to do and where to go in Thailand, from the doctors that I worked with and so I took their advice and visited quite a few temples and museums. My most memorable trip was a trip over a long weekend to see the elephants at an elephant sanctuary. We got to feed them and bath them. It was a life changing experience.

The first thing that will struck me is the difference in size of the hospital and campus compared to that in Thailand. I will also constantly be reminded of the cutting-edge equipment and generally better state of infrastructure at Chulalngkorn hospital compared to Tygerberg hospital.

The one thing that will also resonate with me is the friendliness amongst the hospital staff at the Chulalongkorn hospital. Every person I encountered was eager to help and always friendly, qualities that we often lack at Tygerberg hospital. South Africa is a country riddled with ghosts of its past and so there are always issues about culture and race which constantly plague the country and it is so easy to fall into the black hole of all these issues. Occasionally, it is lovely to get away from all the negativity and to experience life in other countries and to experience and embrace other cultures, completely different to one’s own. I met a lot of students from all over the world who were doing summer programmes at Chulalongkorn university.

I became friends with so many of them over the course of four weeks, despite our completely different backgrounds, sexual orientation, race, cultural beliefs or religious beliefs and most times communication barriers, as most of the student’s first language was not English. I look back on my four weeks at Chulalngkorn University and realise that without them, my trip would not have been as memorable. Studying medicine has made me so complacent and I have been so boxed up with the idea of graduating after being stuck on a small campus with the same people for so many years, that I have lost sight of all the wonderful opportunities around me and the amazing programmes that I could be a part of.

The one thing that this trip has taught me that I will never forget is that it is so easy to get stuck in a self-constructed black hole of all our problems and all the issues around us, which makes it vital to look at the bigger picture once in a while in order to gather the strength and courage to step out of that black hole and to open up our minds to the endless possibilities that await us at the other side of the black hole. This trip was an eye opener for me and definitely the beginning of many to come. Thank you the Stellenbosch University for this opportunity.