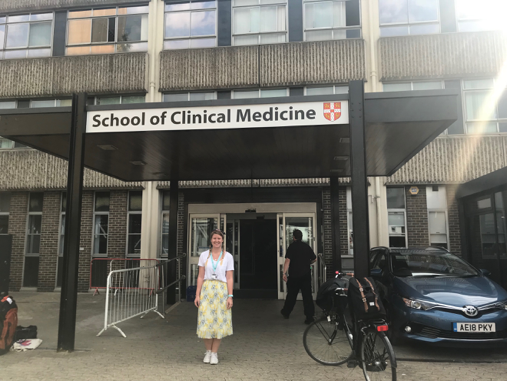 During my MB, ChB IV elective in 2017, I remained in my hometown of Port Elizabeth and conducted my elective at my local hospital which, is situated right around the corner from my house. It had been my greatest desire to complete one of my two electives in a different country, preferably somewhere in Europe, and when my attempts proved unsuccessful at the end of 2017 I resolved myself to make my dream a reality in time for my final elective. One of the main reasons for not being able to go overseas for my fourth year elective was the fact that I had left the planning for too late and by the time I looked into elective programs abroad I was very disappointed to realise that majority of the application deadlines had already passed.

As a result, I was determined not to make the same mistake twice and so, even before I embarked on my first elective, I was already looking into international options for my elective for the following year. It has always been a dream of mine to go to England and so it seemed only logical to me to do some research into fulfilling my elective requirements at a University in the United Kingdom. Naturally, I first looked into the application process and entrance criteria at Oxford and Cambridge Universities, arguably the most famous universities in the world. I quickly discovered that it would be impossible to complete my elective at Oxford as the application deadline for an elective placement was two years prior to the commencement of an elective which, just my luck had already come and gone, and furthermore, the application process was very rigorous. That then resulted in me turning my attention to Cambridge University.

When I began looking at elective prospects in January 2017 for July 2018, I was elated to discover that the applications for Cambridge University had yet to open and that the application process itself occurred in stages thus, allowing applicants time to gather all the required documentation after having passed preliminarily application stages. This was in contrast to most of the other elective programs which, demanded all the documents upfront together with a sometimes astronomical application fee with no guarantee of success. Owing to my previous disappointments, I ensured that my application was ready to be submitted the day the applications opened, namely the 23rd of February 2017, a full five months prior to the application deadline. Despite this fact, I was still initially waitlisted for Cambridge and for this reason I highly recommend that if one is considering a formal elective programme, especially one of the many overseas opportunities, one should ensure that he/she compiles and submits his/her application as soon as possible, regardless of the deadline of the elective application, in order to try circumvent disappointment. I am speaking from experience.

But, then, on the 24th of July 2017 everything changed when I was provisionally accepted for an elective in metabolic science. I felt that all my hard work had come to fruition and that I was finally going to have the opportunity to realise my dream of travelling to England. What followed was many months of completing my application which, included applying for my visa, getting a police clearance letter from the police station, completing an exhausting English language proficiency test, having blood tests to prove my immunisation record and that I was not infected with TB and finally making online payments to secure my placement.

After more than a year of planning, preparations and correspondence with the very helpful staff in the Cambridge elective office, I finally departed for England on the 26th of June 2018, on my first solo overseas expedition.

For any future elective students here are some helpful tips in preparation for your departure:

I had the once in a lifetime opportunity to complete my fifth year medical elective in the field of Endocrinology at the Cambridge School of Clinical Medicine in the United Kingdom. I was stationed at Addenbrooke’s Hospital for the duration of my elective which, is the government teaching hospital falling under the jurisdiction of the National Health Service (NHS) at the Cambridge Medical campus.

There was no typical day while I was at Cambridge University, each and every day was different. I had the immense privilege of being able to sort of determine my own daily schedule based on what I wished to observe. Upon my arrival, my external supervisor gave me an overall schedule for the entire department of endocrinology which, outlined the inpatient, as well as, the outpatient facilities and services. He provided me with the ward round and clinic schedules, the locations, as well as, the consultants and health care practitioners in charge of the various endocrine services. I was then able to pick and choose whether I wanted to spend the day in one of the many metabolic science clinics or in the wards with the admitted patients.

During my four weeks at Addenbrooke’s Hospital I rotated through most of the services offered in the department of endocrinology. I spent some days in the wards, participating in ward rounds and seeing patients together with the doctors yet, most of my time was spent in the outpatient clinics in the Wolfson Diabetes and Endocrine Clinic situated in Addenbrooke’s. Most days there was a morning and afternoon clinic and all the healthcare practitioners were extremely welcoming and let me sit in and observe their consultations. I was able to attend the following clinics during my elective: diabetes type 1, diabetes type 2, nephrology clinic, diabetic foot clinic, pituitary clinic, Thyroid clinic, Addison’s disease clinic, paediatric diabetes clinic and the pregnancy and diabetes clinic. It was wonderful to be afforded the opportunity to rotate through all the endocrinology facilities available at Addenbrooke’s as, it allowed me the chance to gain exposure in many endocrine conditions where I could apply my knowledge. Furthermore, I was also able to see how each team integrates with one another to provide the best possible service for the patients.

Without being too overly dramatic I can say with the utmost certainty that my travels to the United Kingdom and my attendance at the prestigious Cambridge University were utterly life changing. The experience was everything I had hoped it would be and so much more. Naturally, I was there predominantly as a tourist wanting to see and take in as much of what England had to offer. I had the incredible opportunity to be stationed in Cambridge for four weeks and consequently, immersed myself in as much as was physically possible while there. I toured the many breath-taking Cambridge colleges, watched Shakespeare plays in the park, went punting in the river Cam (a pastime which has existed almost since the erection of Cambridge University in 1213 AD), went to museum exhibitions, went to watch the World Cup football matches in traditional English pubs and much more. Furthermore, I also had the chance to take a day trip to Oxford, a weekend getaway to Brighton beach, a trip to York and I spent a few days in London itself taking in all the sites most memorable of which, a day at Wimbledon where I had the amazing opportunity to watch Serena Williams in action.

Despite the fact that I went to England with my main sights set on exploring everything to offer, the medicine, in no way took a subsidiary role to my many historical and colourful expeditions. During the four weeks I spent at Addenbrooke’s Hospital, I was able to bear witness to some of the finest medicine I have yet to encounter despite the fact that it was entirely in an observational capacity. I was able to see the NHS, which I had only heard about prior to my trip, in its truest form and it was incredible to behold. The comparisons drawn between a government hospital like Tygerberg and Addenbrooke’s are almost indescribable. It was fascinating to see the day to day running of a speciality like endocrinology which, involves subspecialties and a lot of technology and then try to compare that to what I have experienced in the past at Tygerberg Hospital.

My passion has always lain with babies and children and historically I have enjoyed my paediatric, neonatology and obstetric rotations the most which, made me decide to complete my MB, ChB IV elective in neonatology at Netcare Greenacres Hospital in Port Elizabeth. For my fifth year elective at Cambridge I ideally would have loved to have had the opportunity to do my elective in a field related to paediatrics or neonates, however, as I was initially waitlisted I had to content myself with a position in whatever field was available as, there are a finite number of elective opportunities at Addebrooke’s Hospital. This is how I came to be in the field of endocrinology for my elective. It was definitely not my first choice, or even on my radar of fields in which I wanted to gain more experience as, I’ve never been much interested or seen myself going into endocrinology. That being said, and while my heart is definitely still set on helping tiny humans, it was a very valuable and worthwhile experience, one which gave me a newfound appreciation for endocrinology and the vital role it plays in some patients’ lives.

I have always seen myself going into the field of paediatrics or neonatology, never having put much stock on any of the other specialities as a potential avenue of interest or further inquiry. For the most part my opinion has remained unchanged as, I definitely still see myself pursuing a career which revolves around tiny humans, however, I would be lying if I said that endocrinology still holds no interest for me. I found myself fascinated by the conditions I saw at Addenbrooke’s Hospital, especially the way in which the NHS was run with regards to these conditions and how the different team members integrated to serve their patients. I had always considered endocrinology to be a boring specialty without much fluidity or change yet, this could not be further from the truth. No two patients presented in the same way nor were any two patients handled in the same way by the endocrinology team. Every patient’s management is specifically tailored to his/her case and his/her needs and wants. I am unsure of whether it was just the way in which endocrinology cases were addressed in the NHS hospital of Addenbrooke’s but, endocrinology definitely interests me a great deal more now than when I embarked on my elective six weeks ago.

This was, by far, the most valuable experience of my life. Obviously, that did not only have to do with the medicine but, had to do with my trip as a whole. It was just being in England; the place I have dreamed about going to since I was five years old. It was simply being at a University like Cambridge which, I have associated with excellence and brilliance ever since I can remember and being surrounded by all the history and walking in the same places as some of my idols like Steven Hawking and Sir Isaac Newton. It was a life-altering, earth shattering trip which I will never ever forget and one, which I feel has forever changed me and shaped the person I am destined to become. I am more determined than ever to qualify and move to England one day to pursue my career in paediatrics and, after a trip like this I finally feel like this dream is a possibility and I dare say even a reality.