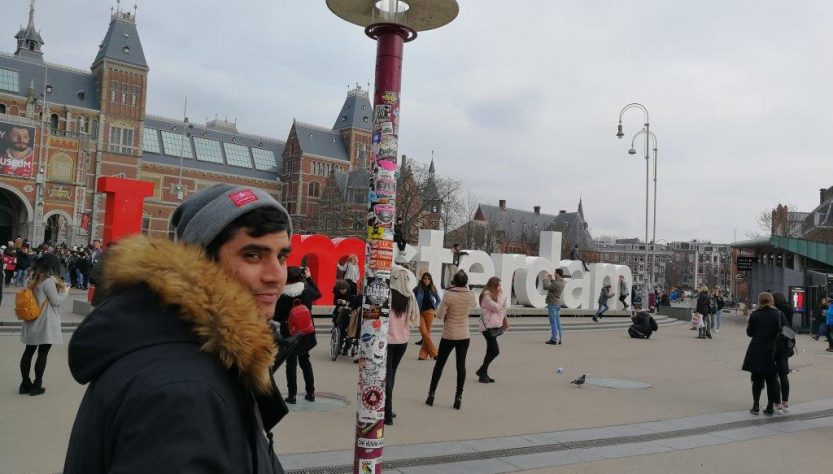 I have recently returned from a life changing journey on my six month exchange at the Economics and Business department of the prestigious University of Amsterdam where I was fortunate enough to take some elective modules in the Masters of Financial Risk Management program. I can honestly say that travel is the one thing you can buy that helps you to grow. Here are some of my thoughts about the life changing adventure I went on.

The initial exchange application process can seem a little overbearing and a mountain to climb at the outset. However most travellers would agree that the best views are after the hardest climbs. With that analogy in mind the arduous process was definitely worthwhile for the adventure it made possible.

Choosing a host institution was the first and foremost bit of research that was required in order to set up my exchange overseas. I did a lot of research in finding partner universities that offered courses of interest in English. It was very important to me that the courses would be taught and ran in English as many European universities offer the majority of courses in the indigenous language. Amsterdam University had a master’s program in Financial Risk Management that would be taught in English and had a partnership agreement with Stellenbosch. The University of Amsterdam is also ranked amongst the top 50 academic institutions in the world. The quality of academics and the languages they would be taught in were my primary focuses for choosing a host institution.

I also did a lot of research on the funding that was available at different partner institutions for the exchange. The cost of living at different host institutions and the funding that was available was also a crucial factor for choosing a viable host institution. The cost of living and travelling in Amsterdam is quite high, so I would recommend finding a part time job to fund travelling and other expenses if possible. I was very fortunate to find a job with a tutoring company in Amsterdam which went along way to making additional travel possible.
At this point I would like to sincerely thank the International Office at Stellenbosch University, The exchange office at the University of Amsterdam and Schroders for providing the funding that made this life changing experience possible.

Amsterdam: The city of bicycles, red lights and coffee shops. The adventure begins!

Whilst on exchange I was enrolled for four courses, namely, Advanced Financial Risk Management, Fixed Income Risk Management, Behavioural Finance and Game Theory. The level of intensity of academic studies in these subjects at the UvA is something that I surprisingly found to be both anti-climactic and heart-warmingly redeeming.

The University of Amsterdam (UvA) boasts the number one business school in the Netherlands and is considered to be amongst the top 50 institutions in the world. The University of Stellenbosch places 400th in the world according to some rankings. With this in mind I had imagined that superior ranking of UvA somehow meant they would have advanced courses that I have not been exposed to. In this sense the level of intensity at the UvA was anti-climactic, the Masters course in FRM is open to students after a three year bachelor’s degree. This is different to Stellenbosch where we do a three year bachelors course, a year of Honours and then a 2 year program for Masters. This meant that the academic course work was akin to work covered at the Honours level in the FRM program at Stellenbosch.

I was also very surprised by the differences in the sizes of the classes at the two Universities, in my FRM Masters Programme at Stellenbosch we have a class of 5 students whereas at the UvA the classes were no less than 60-100 students. The anti-climactic nature of the level of academic intensity was also heart-warmingly redeeming in the sense that the imaginary knowledge barrier I had presumed to exist was in fact only imaginary. It was reassuring to discover that quality of the FRM Masters course at Stellenbosch University is competitive with the some of the most reputable academic institutions in the world.

The exchange office at the UvA provides a truly marvellous service for international students on arrival. The UvA arranges a pick up day from the airport, assists with the collection of keys for your accommodation and helps with registration at home affairs all upon arrival. The other amazing thing was that my stipend that the UvA granted me was already linked to my passport number and could be collected on a pre-loaded debit card at any of the money exchanges at the airports or train stations in Amsterdam. Having immediate access to a debit card with local currency made me feel a lot more comfortable arriving in a foreign country where I knew nobody.
I stayed in an accommodation for international students organised by a housing company through the UvA. It was a wonderful apartment that I shared with a fellow international student from Germany. Having a roommate from Germany to explore Amsterdam with made for much exposure to many international cultures and meeting people from all over the world. Amsterdam was a wonderful city to live in and experience, I was able to rent a bicycle very cheaply (it’s worth checking out ‘swap fiets’) which provided the independence in exploring the city of Amsterdam. The public transport system in the Netherlands is truly something to be admired as you can visit other cities in the Netherlands by train for amazing day trips.

Returning to South Africa was filled with mixed emotions: I missed the place I called home in Amsterdam and had miss the place I used to call home in South Africa. The experience abroad has enriched my understanding and outlook on many different facets of life. Enrichment of life experience of this magnitude is challenging to summarise but I will do my best to discuss some of the changes that I found rather interesting.

Being afforded the opportunity to spend six months at the UvA drastically shifted my perspective of what was possible, I had not previously imagined myself having the opportunity to travel at this stage of my life. Living in different societal constructs made me far more aware of the different unspoken rules to which groups of people seemingly secretly agree to in the construction of a society. It broadened my view on what is possible in terms of how the collective organize themselves and to the nature of different thinking on this subject matter.
Another notable change in perspective was the cost of living in different societies. Whilst South Africa has its problems with crime and inefficiency in comparison to an industrialized nation like the Netherlands, it certainly has renewed my appreciation for the relatively low cost of living that we enjoy in Stellenbosch. The return to Stellenbosch was welcomed home by walking into the grocery store and having the feeling of being able to afford a much larger variety of products at a third of the cost.

The exchange abroad definitely influenced my future plans for travelling abroad once again. Going to Amsterdam for six months on exchange made me realize that seeing, living, working and studying in different parts of the world is not as out of reach as we might think. Moreover the life experience gained and memories made have given me the travel bug and my newly found wings of freedom have the urge to fly again soon. I am planning to hopefully do a joint PHD with a partner university in the States as the exchange experience has given me the confidence to dream big with regards to seeing the world.
Going on exchange is the most life changing and worthwhile adventure you can go on, so I urge you to do it!!