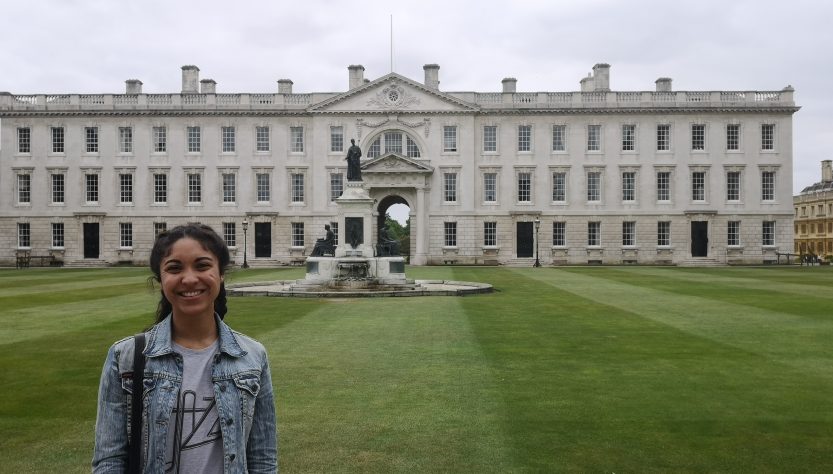 My International Summer School experience had been in the making for almost a year. I had known for a long time that I wanted to take part in a short-term study abroad programme during my undergraduate degree, it just came down to finding the right one. Choosing my final year of studies to pursue this trip meant that I had a better idea of which academic field I wanted to further explore. It also allowed me to better understand what I wanted to gain from the experience both academically and personally. After diving deep into study abroad websites, I came across the University of Cambridge’s International Summer School which offered a specialised Literature Programme. This programme appealed to me because of the option to participate for one, two, or four weeks. The variety within the elective choices for the courses within the Literature Programme was also another plus for me.

After receiving acceptance from Cambridge and choosing Newnham College for accommodation, the travel admin began! This being the first time I would be traveling abroad on my own, my learning began long before I even boarded the plane. From spending five hours in the queue at home affairs for my passport to gathering the countless pages of documents for my visa application. It turns out that traveling requires many hours in queues and looking back, I am sure that I got most of my preparatory reading done while waiting in lines.

Little did I know that the most reading I would have to do this year would happen after my English exam. The thirty-day countdown began as soon as I arrived back home from Stellenbosch. A month to read seven novels, ten short stories, as well as to organise the rest of the admin necessary for traveling abroad. With each story I finished reading, came a greater excitement for the trip but this was all mixed with the overwhelming feeling that I was not ready to go on this journey alone.

I was stressed that I would never be able to finish all those books and I did not want to return to South Africa feeling that I did not give it my all. I was worried that security would stop me at the airport or that my flight would be delayed so I would miss my connecting flight. I was so concerned about all that I had to go through in order to get myself to England, I barely thought about what would happen when I actually arrived in Cambridge.

As soon as I was shown my room in Newnham College, I was struck by the view of the perfectly trimmed, picturesque gardens. But I couldn’t appreciate it for long as I had to immediately find my way to the International Office to register. The student assistants and staff were incredibly helpful and reassuring for those of us who were feeling quite stunned by the newness we were expected to become accustomed to in such a short period of time.

Our fear of adapting to this new space was quickly forgotten as friendships were formed as soon as we sat down for our first dinner in the college. Mealtimes soon became one of my favourite aspects of the Summer School simply because it gave us the chance to really get to understand the countries and cultures from which everyone travelled. It was here that I met the people it would become the most difficult to say goodbye to when they would be heading back to their homes in the United States, Melbourne, China, and Poland.

Falling into a routine of breakfast, classes, and free time to explore the town, made staying in Cambridge more than just a tourist’s experience for me. After classes, before dinner and evening lectures, was our time to take speedy walks to town over the beautiful bridges with views of King’s College and Trinity College. Cambridge’s maze-like side streets made it easy to feel as though we were discovering new places each day. Even on the last day, I found myself excited by the fact that it still felt as if I was lost in a strange town amongst the tour groups and exquisite architecture.

We had to hunt for the hours between classes to go souvenir shopping, museum visiting, and river punting. Yet, it wasn’t an issue if there wasn’t enough time in the day because our classes and lectures were the highlights. The literature classes were no more than twenty-five people which made it an incredibly interactive environment that welcomed discussions about our conflicting interpretations and opinions. I was not disappointed by any of my course choices and the instructors really challenged our thinking about the texts we studied. I realised that a classroom truly needs voices ranging in ages and cultural backgrounds in order to facilitate richer discussions.

Choosing the Literature Programme did not mean that that was the only field with which I engaged. Our evening lectures ranged in subjects from archaeology to politics, and Leonardo da Vinci to Shakespeare. Attending the lectures I thought I would have no interest in, ended up being fascinating topics presented by some of the most passionate professionals I have ever encountered. The constant stream of information flooding our brains each day eventually tired all of us out and we concluded that two weeks was the perfect amount of time to spend there.

Because I arrived in South Africa the day before the start of the second semester, I basically stepped off the plane straight into my first class. I thought it would be easy to fall back into my routine at Stellenbosch seeing as I only spent two weeks abroad. However, while readjusting myself to being back here, I had to still be in the Cambridge mindset to tackle the essays I opted to write for two of my courses.

I found the writing of these essays for evaluation to be the most challenging part of the Summer School Programme. Their emphasis on personal interpretation and close reading made it quite a contrast to the research-based essays we write at Stellenbosch. Although this shift in style took time to wrap my brain around, I know that it has given me the confidence to experiment with my approach in academic writing that will benefit my future studies.

This experience studying abroad has affirmed my hope to pursue postgraduate studies overseas. It has given me the opportunity to understand all that goes into travelling and it has reassured me that I am capable of doing it alone. I absolutely encourage anyone who is contemplating an International Summer School to grab any opportunity they see. Students aren’t exaggerating when they say it truly is a life-changing experience that teaches you more than just what is taught in class.