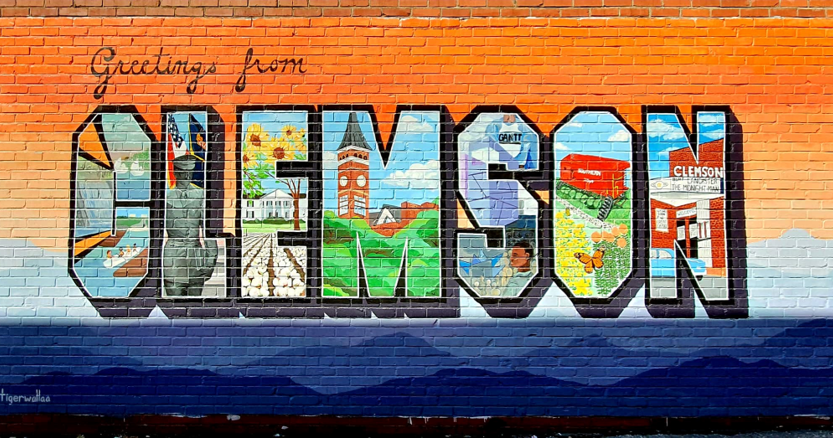 I would like to mention how stressful preparing for my semester abroad was. I really would like to put it into words, but I can’t. Mostly because I can’t remember how stressful it was. I know for certain that I was stressed, but the whole experience overshadowed that part of my exchange. Which, to me, is just an indication of how worthwhile all the effort and stress was.

If I could’ve done anything differently I would have done everything two weeks earlier than I thought I needed to. Start VISA applications, go for the necessary vaccinations, and apply for your courses as soon as you possibly can. Don’t stress too much about which modules to choose though, because chances are they will change another four times before you start classes. It’s just the way things are, so there’s no use worrying about it. I ended up only doing two of the courses I initially wanted to do. I also ended up accidentally doing a public speaking course… So probably check what a course is about before selecting it.  It helps to be a bit persistent when applying for modules though, because sometimes the lecturers forget they already rejected you for a particular course.

What I definitely did right, pre-departure, was to make a comprehensive to-do list that I worked from for four months preceding my trip. My list was comprised of sixteen A4 pages that I taped together and stuck on my wall and frantically highlighted and scribbled on at least once a day like a mad woman. Those pre-departure months really tune up your admin skills. And you for sure need to be at the top of your admin game to prepare you for all of the inevitable issues with getting a phone plan, organizing medical insurance, and all sorts of other painful business. But those things, like with the problems registering for courses, will all work out.

Something else to prepare for is to be overwhelmed by orange. From the first day I arrived in Clemson I was assaulted by a wave of orange. I walked around looking at students, parents, grandparents, and infants all in the trademark orange Clemson merch. I remember thinking to myself, “I’ll die before I’m caught wearing that.” And now half the stuff in my cupboard is orange.

The orange merch turned out to be useful, especially on game days. When I went to Clemson the football team had just won the ACC Championships the year before, so everyone on campus lived and breathed football. The athletes themselves are treated like Gods. I had a couple players in my class which is the only place I saw them on campus because the rest of the time they are driven between classes in cars with tinted windows. They also have their own private gym and training centre and dining hall. Personally, I didn’t see what the big deal was. But maybe that’s because my favourite part of the football was the tailgating beforehand.

Tailgating and game days are a full-day thing. Our tradition was to meet up at 10h00 in someone’s apartment to crack open the first Bud Light and have breakfast. An hour or so after that, things would escalate dramatically when we would meet up with everyone else in the exchange community and start a round of beer pong. Once everyone started to look sufficiently blurry we would head onto campus where every couple of feet someone had set their pick-up trucks and cooler boxes. Everyone is very welcoming and it’s easy enough to find tailgates that are happy to have a couple international students hanging around. They love you and they feed you and they give you more beer until everyone packs up and heads for the game. 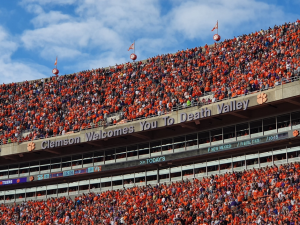 Tailgating is not the only American tradition you can participate in. You should also give a couple others a try too: play cornhole, go to home-coming, carve pumpkins on Halloween, have a thanksgiving feast, go to the mall on Black Friday. And the whole semester long you can just go absolutely mental about fall (drink pumpkin spice lattés until you throw up, wear scarves when it’s still 30 degrees out, snort some cinnamon, go wild).

There are a lot of traditions specific to Clemson too. Take part in some Leisure Skills classes – that way you can do things like Yoga or Riflery or Stand-Up Paddle Boarding for credits. Another Clemson tradition I highly recommend is going to Tiger Town Tavern (locally known as Triple T’s) to get a free T-shirt on your 21st. And if you are already 21 then tell them you’re an international student looking for a souvenir. Never be afraid to play the international card. All you have to do is sound foreign and confused.

The international card can be used when you’re lost on campus, when you don’t know how the self-checkout tills at Walmart work, or when you can’t figure out the stupid Imperial Measurement system. The international card came in handy when I needed to excuse myself from classes so I could go traveling with fellow exchange students. There are plenty of places close by which make for a perfect weekend trip. A few of the places I visited during the semester included Nashville, Charleston, the Great Smoky Mountains, and Atlanta. If you can get five people together and rent a car then travelling to nearby states is really affordable.

If you are invited for a weekend trip and have the resources to go, but aren’t sure whether you want to go, take the opportunity anyway. One of the best trips I took was staying in an RV for four days with six other people so we could go watch the NASCAR in Alabama. Neither NASCAR nor RVs seemed like my kind of thing, but it was a true American experience and I’m so glad that I did it. 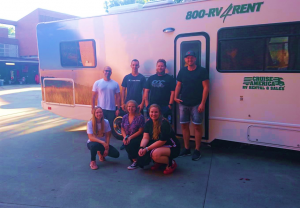 Speaking of things which aren’t my kind of thing, it can’t go unmentioned that the Southern States are predominantly red states. The stereotypes of these conservative states are all true. Every second person is in camouflage, their patriotism is almost tangible (and they whack you with it regularly), you can buy guns at Walmart, and almost every local I met was an avid supporter of Trump. I discovered that when I looked at things from a more anthropological perspective, it was a lot easier to not want to argue about politics and religion and social issues and all the other tricky topics 24/7. And although this may all sound a little scary and frustrating, the other stereotypes about the Southern States are true too. The locals are exceptionally hospitable, everyone calls each other “ma’am” and “sir,” the accents may be the most charming thing I’ve ever heard, and there’s fried chicken as far as the eye can see. There’s so much fried food everywhere that by a month in you’ll be craving anything with real nutritional value. It’s all part of the experience. And you’ll have plenty of time to remember what health tastes like when you get back home. And that time will come before you know it.

Time on the exchange moves very strangely. For most of the time it felt like I’d been in Clemson for years and like I’d known the friends I made there my whole life. At some points it also feels like it won’t end – like you’re just going to go home for the holidays and then come back and see everyone again next semester. But despite all those feelings of permanence, I now have to think about really small, obscure details to remind myself that it all actually happened because a semester goes by so quickly. And it’s odd to think that my goal for the past four years has now been achieved.

That being said, it’s good to be home and around the people I love. You gain a real appreciation for your home country when you’ve lived somewhere else for a couple of months. I appreciate the South African humour so much more now. And I appreciate the way we do things. I know we have our issues, but I think we’re better for it. For example, loadshedding is a nightmare, but the excitement everyone has each time the lights come back on never dissipates. It also always gives people something to relate on. So even the bad things are not all bad.

When I first got back I felt like everything had changed. But mostly it’s me who has changed. I hope that some of the ways I’ve changed will become a fundamental part of my character, and other changes I hope will fade fast – like my new-found love of country music.

Most people ask me if my time in South Carolina was how it is in the movies. The truth is that the movies don’t do the whole American college experience justice. It’s so much more than you can ever capture in words or on camera. 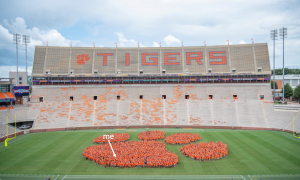