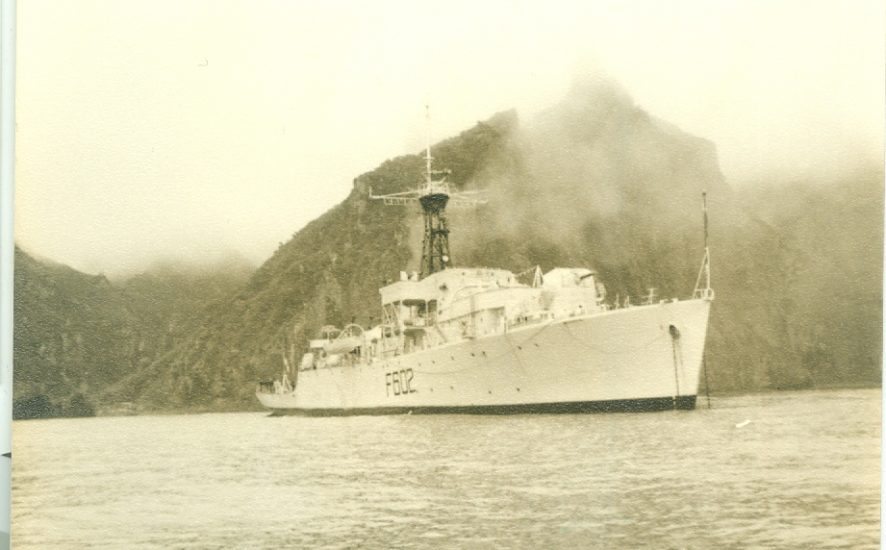 Why did Mr Norris visited these islands:       He worked on the Transvaal and Good Hope, for the South African Navy

Position on these ships – within the navy:   Telegraphist – Radio Operator

Cyril Edward Norris always had a keen interest in ships and after obtaining his Junior Certificate (Grade 10), he wished to go to the General Botha Academy, which was in Gordon’s Bay, where he would have completed his schooling, but his father would not sign the papers and insisted that he apply to the South African Railways & Harbours (as it was then called), for employment.  He was given a post in the Parcels / Baggage Office in Johannesburg, where he worked for a while and was selected to go on a training course at the Railway College in Kroonstad and then Esselen Park, to learn Morse Code, typing and all that was required to be a telegraphist. On completion of the course, he was sent to work in Waterval Boven, but the sea was still calling him and he then applied to the South African Navy and signed up in the Permanent Force for five years. It was during this time that Mr Norris travelled to the Prince Edward Islands, Gough Island and Tristan da Cunha. He was the Telegraphist, also known as a Radio Operator in navy frigates on these voyages. Due to his position he got the chance to disembark from these ships to visit the islands’ stations, in order to assist with radio operation issues.

The Antarctic Legacy of South Africa would like to thank Mrs Laura Norris (widow of the late Mr Cyril Norris) for making contact and supplying her late husband’s photo collection, after she had heard about our project at a SANSA (Antarctica) talk in early 2017.

We encourage anyone with photos, documents etc. relating to South Africa’s involvement “down south” to contact ALSA at antarcticlegacy@sun.ac.za