This day in history: ‘Van’ van der Merwe becomes the Leader of the first South African weather team on Gough Island in 1956 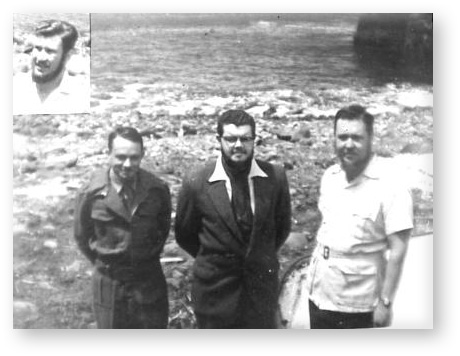 Johannes J. ‘Van’ van der Merwe (Meteorological Assistant Gr. II) of the then South African Weather Bureau (SAWB) was the only South African member of the privately-organized Gough Island Scientific Survey (GISS) that spent six months on the island over 1955/56.  He was also the oldest member at 30 years of age.

When the survey members left Gough on 13 May 1956 on the frigate S.A.S. Transvaal (Lieutenant Commander George Noel Green) for Cape Town, ‘Van’ stayed behind at The Glen where the survey had erected its hut, along with three newly arrived companions, to continue daily weather observations and to constitute the First South African Overwintering Team on Gough (G1).  This decision had been taken by the SAWB based on the forecasting value of the weather details (including from balloon ascents) that ‘Van’ had recorded.

Before the ship sailed ‘Van’ “was sworn in as Magistrate and as Postmaster of the island”, presumably by Pat R. Forsyth Thomson, the Tristan da Cunha Administrator at the time, who had joined the Transvaal when it called at Tristan on its way to Gough.  A SAWB representative, Mr S.E Engelbrecht also came ashore to formally take over the GISS hut and remaining stores, for which a cheque was handed over in payment.

Prior to joining the GISS ‘Van’ had spent a year on Marion Island as a meteorologist with the Ninth Overwintering Team (March 1952-April 1953; the first team to spend a full year on the island) before being seconded to the survey by the bureau.  According to Martin Holdgate’s book of the Gough expedition ‘No Pathway Here’, Van “had a reputation of being the most adventurous of all their [the Bureau’s] staff” and described him as “a big man, broad-faced and dark-haired, with eyes that suggested depths of humour hidden beneath a placid exterior.”  He was described as fitting in well with the survey’s British university graduates and took the opportunity to improve his English so to “pass his Civil Service language test”.

Compared to the first team on Marion (see earlier postings on this website) little is known to ALSA about the activities of G1.  Back in the 1980s I exchanged letters about the island with ‘Van’– from memory about the sheep that had then been brought ashore –  but he passed away quite some time ago.  From the team photograph it seems one member (L.C. Henning) may have left early as his portrait appears as an insert.  Fellow team member Barry E. Brokensha is described as an “Aeradio Engineer Gr. II” in South African Navy correspondence, the other two members (Henning and J.P. van Tonder) are described variously as “European labourers” and “general assistants”.

In January 1957 H.R.H. Prince Philip, the Duke of Edinburgh landed briefly on Gough from the R.Y. Britannia and was met by the four G1 team members.  ‘Van’ – wearing a tie! – can be glimpsed scrambling with the Prince over the boulder beach at The Glen in a Pathe News video clip.  In his book ‘Birds from Britannia’ the Duke commented on seeing six Dorper sheep ashore, along with Australorp fowls (24 had been landed in May with G1 and the sheep the year before).  One G1 member had his infected appendix “whipped … out in no time” aboard the yacht.  Perhaps this was L.C. Henning.

G1 was relieved on 28 May 1957, again by the Transvaal with Lt Commander Green as its Captain once more, by the eight-person second overwintering team, led by Pierre Maré.  At that time the UK-appointed roles of Magistrate and Postmaster fell away.  South Africa has occupied Gough Island ever since, with the current team being the 61st.  J.J. van der Merwe returned to Gough as a member of the Fifth Overwintering Team of 1960, according to its team photograph on the SANAP website.