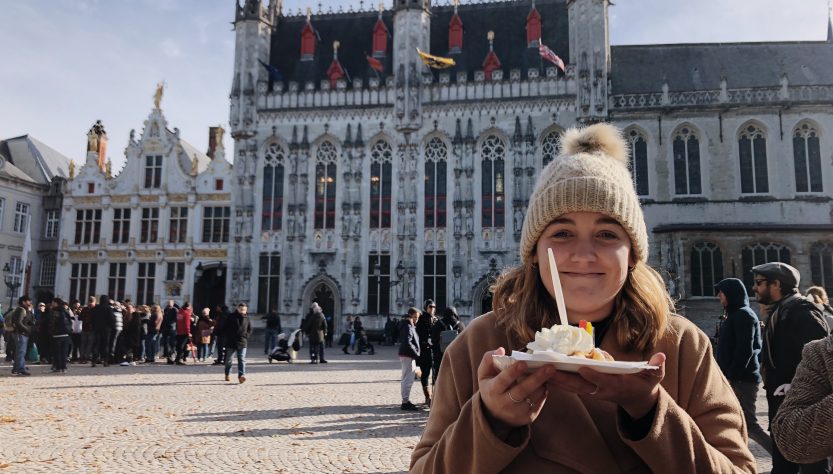 The pre-departure process is extremely overwhelming and quite stressful. Despite making hundreds of lists of things that need to be done, and completing something almost every single day, it still feels like no progress is being made. However, once I started asking around, I realised that many other students felt the exact same way.

In order to stay (relatively) organised, I made a folder for all my exchange documents as well as a folder for all emails sent and received in relation to the exchange. I knew that if I needed something, it would be there.

With regards to the visa application, I would advise anyone to do it as soon as possible. I only received my visa the day before my departure which was very stressful. Several other exchange students had the same experience despite going to different countries. Also, try to get your police clearance quite early on as well, because it takes quite a bit of time to have it approved and returned to you.

If you are looking to live in a student house and not a residence, you should start looking for accommodation as soon as possible. Email everyone! Even if the room or apartment is advertised for a 10-month contract, email them. Many landlords are relatively flexible in terms of rental terms. However, I think the best option in terms of experience would be to use a platform like Facebook to look for a student from your host university who will be on an exchange during your own exchange period. Many exchange students look for others to rent their rooms while they are gone which means you get a fully furnished room, as well as people to share a place with who are usually quite open to the idea of an exchange student living with them.

If you can find a job during the holidays and months before your departure, I would advise you to do it.

In terms of budget, set up a maximum amount you are willing or able to afford each month, but then use the first month of your exchange to set up something more detailed. You won’t be able to budget until arriving and seeing what things cost. I you receive a bursary or any form of financial support from the host university, ask them if they are willing to pay it after you have opened a bank account abroad. By the time I arrived in Belgium, I had lost 300 euros due to the depreciation of the rand.

I think if we had other students who had already completed their exchange to ask questions, it would have made things a lot less stressful. Many of the questions I had before going was quite country and university specific, but since we were the first group of students to go, we obviously had no one to ask. I think the third-year students can benefit from somehow communicating with the fourth-year students who went to the same university or country as it will allow them to ask specific questions.

Experience and the Host University:

I found the academic programme to be quite interesting – the courses were relatively different from Stellenbosch. Majority of the courses I took were heavily based on technology and digitalisation which I found to be very relevant. I only had a textbook for one out of my five courses and course content was based mostly on academic articles. Compared to Stellenbosch, I found the courses to be slightly unstructured, due to there not being a logical flow of chapters. However, the content was very interesting.

I found Stellenbosch’s standards to be relatively higher. Our exams here are a lot of application and often requires a bit of insight from the student, however the questions there was very straightforward with very little application (despite lecturers telling you that you need to be able to apply the work). That being said, I only received an example paper for one of my courses and maybe three or four example questions for another. Therefore, not knowing how to approach studying for a course made it a bit difficult. In addition, the total marks for the exam papers nor the marks for each individual question is received. This makes it difficult to know how much to write for each question. The projects were relatively easy and were not graded as strict as at Stellenbosch.

We were also told by our host university’s course coordinator that Stellenbosch’s undergraduate standard is a lot higher than theirs, and we were therefore allowed to take one masters course despite not meeting all the requirements. Classes work in a slightly different way as well. I usually had only one course per day, but between two to three hours. Lecturers are very approachable and all information can usually be found online.

Meeting other exchange students is really easy. The university organises a lot of events throughout the semester where students have the opportunity to meet one another and socialise.

Many exchange students I spoke to said they made so many lifelong friends, however I would not say that that is the case for me. I made a few good friends with whom I will probably stay in touch for a while, but I do not think that your exchange should be defined by that. It depends solely on you as person and who you end up meeting. I think it is important to remember, especially at the beginning of your exchange, that no one knows you, and that everyone is feeling the exact same way you are. Therefore, do not be shy or hesitate to go up to people and talk to them.

Of course, your academics are very important, but I also believe that travelling while on the exchange is where you will gain the most value and is definitely the most enriching part of the exchange. Try to save money to travel as often as possible. Talk to other exchange students and found out how they travel. If you are in Europe, I would give the following travel tips:

Returning to Stellenbosch was probably the hardest part of the entire exchange. By the end of my exchange I was missing South Africa and my friends so I was looking forward to returning home, however upon returning I felt extremely detached and still experienced a sense of homesickness. Everything was still exactly the same, but at the same time, nothing felt the same. Then I realised I was different. The exchange students of Stellenbosch suddenly had a bond which was also really nice, because you have someone to talk to who knows exactly what you are going through. This was really helpful because as much as you want to tell your friends and they want to hear about it, it is only exciting for about a week, however all the information you draw from in conversations are from your past five months and you realise that your friends do not understand or really care “that much” after a while.

The first week back was extremely overwhelming and it was strange to be surrounded by so many people you know. The second and third week was also difficult, because to you it feels like you have just arrived, but others have forgotten that you ever left. That being said, there is definitely a new appreciation for your country and culture, as well as a desire to travel and see your own country which is great. After my exchange, I am definitely planning on going abroad again. Not necessarily Europe though, maybe some place with a bit more sunshine.

I think I will always return to South Africa, but I definitely cannot stay here for the rest of my life. The exchange semester was the perfect length to make me realise what I want in terms of the country, weather, culture and people where I will want to live again, as well as what I did right and what I did wrong. Next time, I feel a bit more prepared to do a year or two abroad. I think living and studying abroad is the best thing you can do for yourself.

Your perspective on the world, people and yourself, is changed radically. I think I learned, changed and grew more in my five months abroad than in the past two and a half years at Stellenbosch.

And I can definitely say I am not the only one. It was incredible to meet up with other exchange students during the time abroad and see how they have grown and flourished in just three months, and coming back home and seeing them work to keep that side of them is really amazing.  Also, if you like music, stay up to date with bands playing in Europe, because tickets are ridiculously cheap and it is easy to travel to a different country to see them. One of the best parts about coming back was being able to say that I saw my favourite band live!