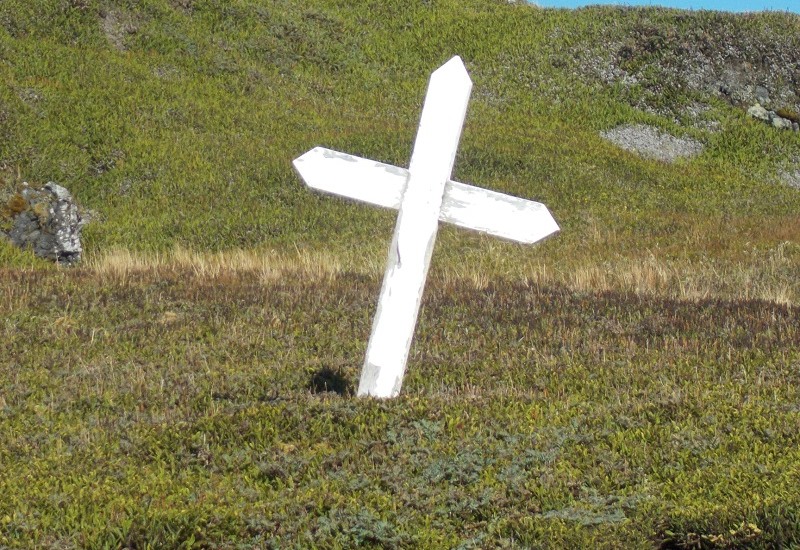 For many years I have often been asked who is commemorated by the white cross without an inscription that is embedded in a bank above Boulder Beach close to Marion Island’s old base.  Inquiries of old team members by the Antarctic Legacy of South Africa have not borne fruit other than to discover it has been there at least back to the 1960s.

ALSA is now pleased to report that the problem has been solved with the help of the South African Naval Museum in Simon’s Town.  The museum is in the process of digitizing its collection of photographs, a number of which cover the first decade of Marion’s occupation by South Africa when navy frigates undertook relief voyages.

In April 1956 the H.M.S.A.S. Transvaal undertook the 12th Relief of Marion Island, taking down the 13th South African Expedition (M13) and bringing off M12.  Shortly before the ship’s departure from the island rough seas in Transvaal Cove off Boulder Beach on 10 April caused the ship’s whaler and motor boat to collide and then capsize, throwing their crews into the sea.  Petty Officer John George Bold, who was in charge of the whaler, got into difficulties in the water and although an attempt to rescue him was made he was not alive when brought ashore.  The Public Works then had to pitch in to repair the badly damaged whaler to allow the Transvaal to take aboard those leaving the island.

Petty Officer Bold was buried at sea with full naval honours on the return voyage to South Africa.  He was the second of three persons to drown due to small boat mishaps off Boulder Beach since South Africa’s occupation of the island group.  Joseph Daniels, who drowned shortly after the island’s annexation on 29 January 1948, lies buried near Trypot Beach.  In 2011 a new cross made by the NDPW was erected over his grave to replace an earlier one that had rotted.  The third drowning was of Joseph Frank Wheeler, Chief Electrician of the R.S. Africana II, on 13 April 1963.  Unlike Daniels and Bold before him, Wheeler’s body was returned to South Africa for burial.

An intriguing fact is that it was not P/O Bold’s first visit to Marion Island.  He, then an Able Seaman, was a member of the 14-man occupation party that stayed ashore from 4 to 29 January 1948 under canvas on Gunner’s Point after the Transvaal had annexed the islands and departed for South Africa.  It was considered essential in terms of international law to maintain an unbroken occupation of the island until ships could return with material to build the first base and the first Marion team to live in it.

During the 2014 relief I looked closely at the Boulder Beach cross but could see no signs of it ever having had an inscription.  However, Glen Knox, ex South Africa Navy has unearthed a photograph taken in 1957 of the cross with Bold’s name painted on its landward side: mystery solved!  The Antarctic Legacy of South Africa is now discussing with the South African Naval Museum how best to replace Bold’s name on his cross during next year’s relief, 60 years after he drowned.  As part of this his service record has been consulted in the South African National Defence Force Documentation Centre in Pretoria and efforts will now be made to search for his next of kin.  He was born in Queenstown on 2 June 1925 (making him only 31 years old when he died) and he had a wife and a daughter born in 1947.  Tellingly, his service record states he had failed a swim test.

Consideration should also be given to commemorating the drowning of Frank Wheeler.  One fitting way to do this would be by way of mounting a plaque bearing the names of Daniels, Bold and Wheeler in the new base.