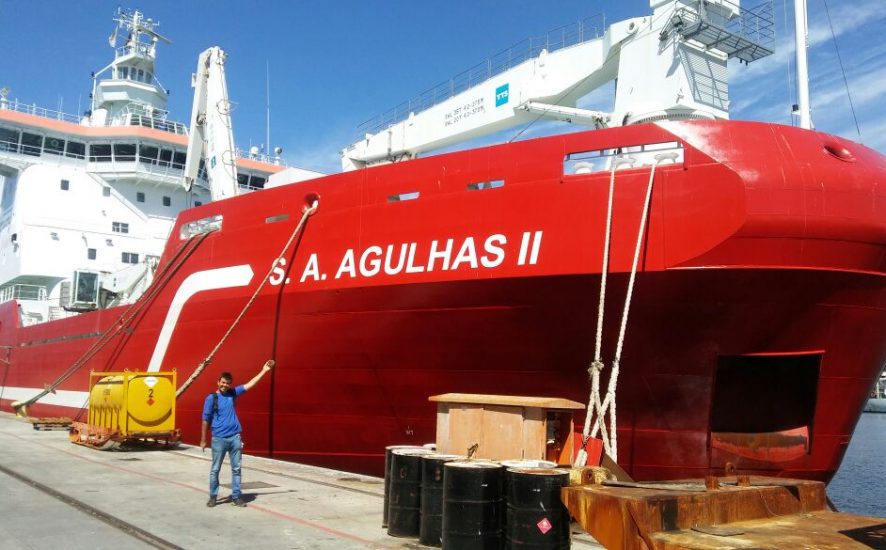 It is almost April, the month in which South African scientists and also visiting international scientists, involved in the South African National Antarctic Programme (SANAP) travel onboard the S.A. Agulhas II to the sub-Antarctic Marion Island for the take-over period. During the takeover period the new overwintering team takes over the duties of the current/ old overwintering team. Such take-over periods provide the opportunity to scientists to conduct fieldwork for a period of roughly two and a half weeks and train their overwintering field assistants to conduct data capturing after the takeover lapsed. During this period the research station (also called the base) is restocked with all necessary supplies i.e. food, medical supplies, fuel (etc.). Packing for Marion Island involves accurate planning and preparation, not only from the Department of Environmental Affairs, but also from the scientists, technical/engineering and support staff, the helicopter pilots and crew, the Department of Public Works (responsible for the base maintenance during the take-over period) and the take-over chefs.

The are currently a number of research projects that involves conducting fieldwork on or around Marion Island and each and every one of these projects needs to be administered and packing of equipment needs to take place roughly a week before the S.A. Agulhas II departs for the island. This packing process involves the weighing of each tote bin before they are placed in the containers and then filling out a detailed packing list. This cargo needs to be cleared by customs, and then the containers are loaded onto the ship and placed in the hold of the ship.

Not only equipment needs to be packed by take-over personnel, but also personal gear. The Department of Environmental Affairs issue every person part of the take-over voyage with the necessary field clothing items as well as kit-bags in which personal clothing should be packed in. These items are issued directly from the clothing store on the second floor of the DEA building at East Pier. It is recommend that, if you are a heavy packer, that at least one kit-bag goes into the container and one is kept with you on the ship (expected date of departure for this year: 05 April 2018). Please also note that the issued clothing is now supplied in plastic bags, in order to reduce the transport of seeds and other contaminants to the island. It is thus important to keep the clothes in the plastic wrapping material for as long as possible.

Please see advise of what to pack for all newcomers to the programme (overwintering team members or take-over personnel).

I myself has done a few take-overs (2011 and 2016) and I also overwintered as part of the 70th Overwintering team. Learning the ropes of the entire take-over process can be time consuming. This year I am glad that I could assist a newcomer to the programme, Dr Mario Mairal. He is a post-doctoral associate at University of Stellenbosch (Centre of Excellence for Invasion Biology, Department of Botany and Zoology, Supervised by: Prof Jaco le Roux) and University of Johannesburg (Centre for Ecological Genomics and Wildlife Conservation,Department of Zoology, Supervised by Prof Bettine Jansen van Vuuren and Dr John Chau). His research focus is: A functional biogeography of the Antarctic. Watch this short interview with Dr Mario Mairal (vide0).