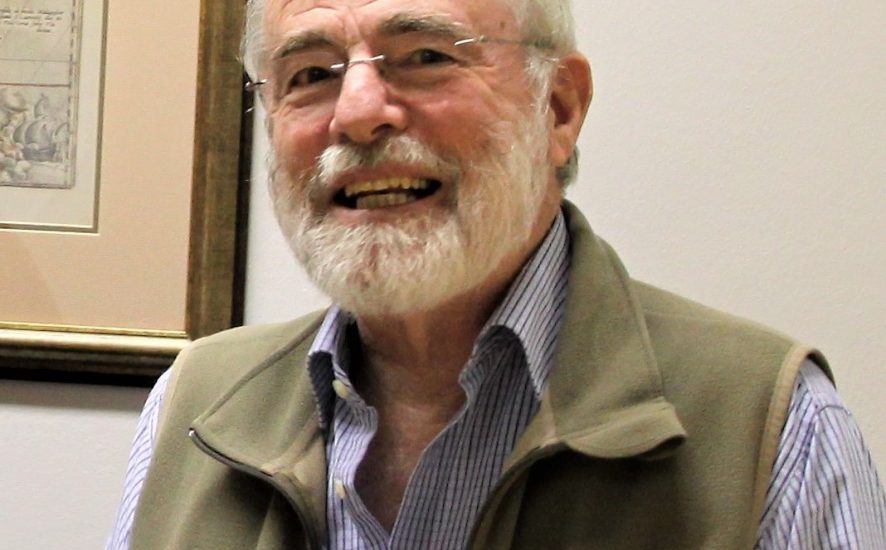 Patrick Morant, a friend and benefactor of the Antarctic Legacy of South Africa project, died on 30 March at the age of 73.  Pat was recovering in hospital from a serious infection when he had a fall resulting in a brain hemorrhage and an ensuing coma, from which he never recovered.

Patrick, a retired South African CSIR scientist who had worked in the coastal and marine fields for many years, had for a long time been collecting hard-cover books on Antarctica, especially on aspects of the history of Antarctic exploration, which after reading he passed on to myself for reading in turn and for safe-keeping.  In May 2017 some 30 of these volumes from his Antarctic collection were donated by him to ALSA.  ALSA passed Pat’s books for housing in the Stellenbosch University’s then-named J.S. Gericke Library (now the Stellenbosch University Library).  Since then, and until as recently as last month, Pat continued to donate Antarctic-themed books to ALSA for the university library.  Each donated book carries a specially designed ALSA bookplate with Patrick’s name included as the books’ donor. 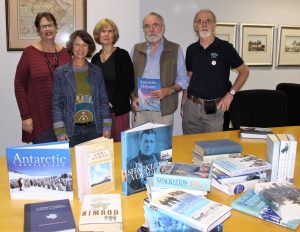 Ria Olivier(ALSA), Dalene Pretorius and Marie Theron (Stellenbosch University Library), Patrick Morant and John Cooper(ALSA) during the donation of the books to the Library

A list of some of the books that has been donated by Patrick Morant.

Butler, A.  The Quest for Frank Wild; Including his Original Memoirs.

Crane, D.   Scott of the Antarctic; A Life of Courage and Tragedy in the Extreme South.

Huntford, R.   The Shackleton Voyages; A Pictorial Anthology of the Polar Explorer and Edwardian Hero.

Larson, E.J.  An Empire of Ice; Scott, Shackleton, and the Heroic Age of Antarctic Science.

Matthiessen, P.   End of the Earth; Voyages to Antarctica.

Riffenburgh, B.   Nimrod; Ernest Shackleton and the Extraordinary Story of the 1907-09 British Antarctic Expedition.

Scholes, A.   Fourteen Men; The Story of the Australian Antarctic Expedition to Heard Island.

Worsley, H.  In Shackleton’s Footsteps; A Return to the Heart of the Antarctic.

He also regularly donated ornithological and environmental books to the FitzPatrick Institute of African Ornithology’s Niven Library at the University of Cape Town.  His name appears on that library’s benefactor board, displayed at the entrance where all can see it.

ALSA’s thoughts are with his partner, Margaret Koopman and with his family at this sad time.  We have lost a good friend but his generous and valuable donations to scholarly libraries at two Western Cape universities over the years will stand as just one part of his legacy.  On a personal note Patrick Morant was a special friend to me of 45 years.  I shall miss him greatly.  Vale, Pat.