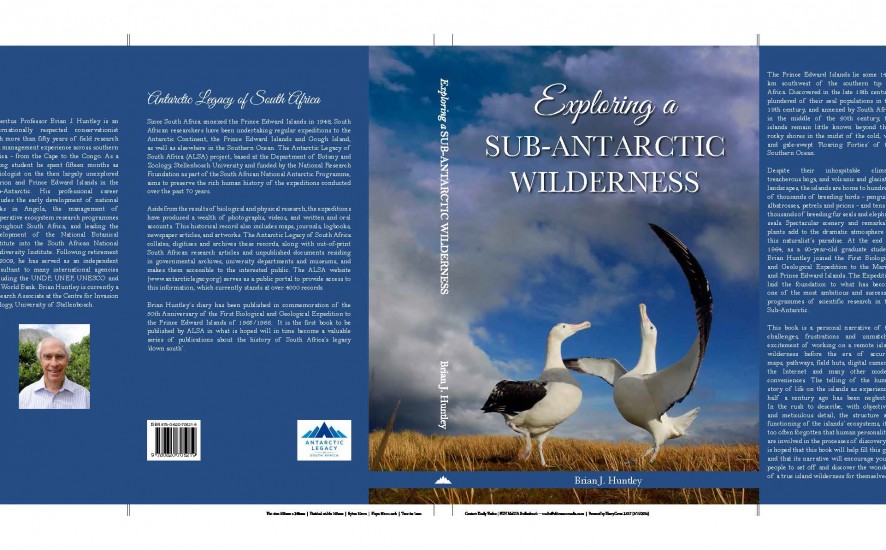 The Antarctic Legacy of South Africa project has been pretty busy this last month behind the scenes, so website postings have been on hold for quite a while.  We are excited and proud to break this drought with the news that ALSA is shortly to publish its first book,  in what it is hoped will be a series of publications to emerge this and next year.

In 1965 Brian Huntley, then only 20, travelled to Marion Island for a 15-month sojourn as the botanist on the First South African Biological and Geological Expedition.  While ashore he kept a daily diary which he has now edited for publication.  The book from the diary, arranged thematically rather than chronologically and with each chapter introduced by text written by Brian this year, is a significant record of life on a sub-Antarctic island half a century ago.

Highlights of Brian’s diary include two visits to nearby Prince Edward Island, most probably the first time anyone since the sealing days has stayed overnight; what is pretty definitely the first summiting of Marion after several attempts; and  observations on the sealing huts of which remains then still existed.  But the diary is more than anything an account how a young botanical researcher conducted and thought about his research in the field.  Island life is not left out and Brian’s describes living with fellow team members in the days before Internet (or for that matter before an island deep freeze, microwaves and digital cameras).  Preliminaries for a braai (barbecue) on Marion in the 1960s were more than just lighting the fire, before that there was a sheep to slaughter…

Brian Huntley’s diary has now gone to the printer.  It will be launched at an evening function at Stellenbosch University next month when the book, illustrated in full colour with Brian’s photos taken at the time, can be purchased, with the author available to sign copies.  A review of ALSA’s first book will appear on this website in due course.

Thanks go to the National Research Foundation for a grant in aid of publication and to Stacey Jansen of SUN MeDIA for her efficient lay-out design and typesetting.