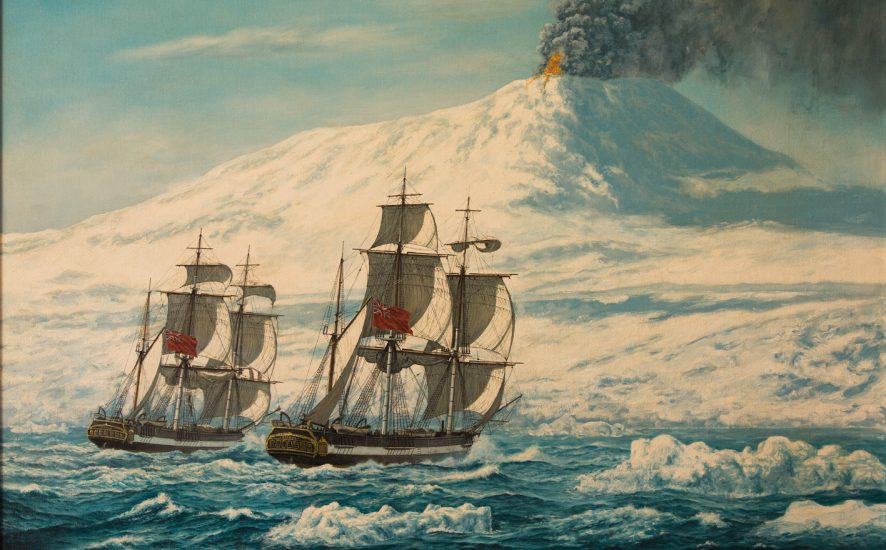 The H.M.S. Terror, a Hecla class 326 (or 340) ton Royal Navy bomb vessel constructed in 1812, sailed past South Africa’s sub-Antarctic Marion Island’s north coast on 22 April 1840 with Commander Francis Rawdon Moira Crozier (16 August 1796 – after 1848?) as its Captain.  The Terror was on an Antarctic expedition with Crozier as second-in-command to Captain Sir James Clark Ross on the H.M.S. Erebus – which had passed by the island a day earlier, having been separated in bad weather while sailing south from Cape Town.

Following the Ross Antarctic Expedition both ships were used by Sir John Franklin in the Arctic in 1845 to find the Northwest Passage, during which both ships and all their crews were lost, resulting in an enduring mystery despite many rescue attempts over the following years (click here).  The sunken wreck of the Erebus was found in 2014, with its bell being recovered as confirmation.  It has now been announced that the wreck of the Terror, again captained by Crozier, had been found in Nunavut‘s Terror Bay on the southern coast of King William Island.  The seemingly intact wreck was discovered by the Arctic Research Foundation 24 m down and 92 km south of the reported location where the ship was abandoned.

The remains of both ships have been designated National Historic Sites of Canada with their exact locations withheld in order to preserve the wrecks from looting.  Click here to view underwater footage of the Terror taken by a ROV (remotely operated vehicle) from the R.V. Martin Bergmann: “We spotted two wine bottles, tables and empty shelving.  Found a desk with open drawers with something in the back corner of the drawer.”

Cape Crozier on Marion Island is named after the Terror’s Captain.  It appears as “C. Crozier” on British Admiralty Chart No. 802 of 1874.

Feature illustration: The painting by Peter Bilas depicts the Erebus and Terror approaching the Ross Ice Shelf and Mount Erebus which the Ross Expedition discovered.  The painting is mounted in the S.A. Agulhas II, South Africa’s current Antarctic research and supply vessel.