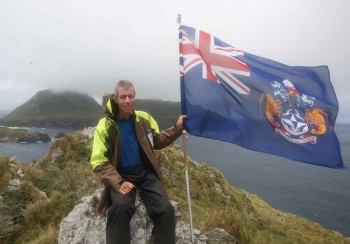 Peter Ryan on Stoltenhoff Island with Nightingale Island in the background.  Photograph by Norman Glass

Peter Ryan, A-rated Director of the University of Cape Town’s Percy FitzPatrick Institute, has been awarded the Gilchrist Memorial Medal by the South African Network for Coastal and Oceanic Research (SANCOR).  Peter manages the Institute’s research on albatrosses and petrels at Marion and Gough Island and at sea in the Southern Ocean.

“Peter Ryan is one of the most prolific marine scientists that South Africa has ever produced. He has an H index of over 50! He is the Director of the Percy FitzPatrick Institute of African Ornithology, but he doesn’t just study birds. He works on pollution and marine litter, he dabbles in fishes and barnacles and he makes real contributions to the management and conservation of marine resources. Peter is one of the go-to guys for the Royal Society for the Protection of Birds and BirdLife International when it comes to seabird conservation and he is worthy recipient of the Gilchrist Medal!

Peter is an A-rated NRF researcher and has authored or co-authored more than 320 peer-reviewed papers (127 as first author). It is particularly noteworthy that Peter has published 12 books, 36 book chapters, including 180 species accounts in the Handbook of the Birds of the World, 80 species accounts in The Atlas of Southern African Birds, various reports including two island management plans, and 190 popular and semi-popular articles. Peter has presented papers and posters at 18 international symposia and has been invited to present seminars at numerous institutions both in South Africa and overseas. Peter has been active in numerous leadership roles also been president of BirdLife South Africa (2010-2012), and has played key roles as an advisor for the “Working for the Coast” programme with the Two Oceans Aquarium’s education division and for the Birds for NEMBA legislation, to mention a few. Peter has supervised or co-supervised 15 PhD students, 18 MSc students by dissertation, 57 research projects of MSc students conducting their degrees by coursework and dissertation (54 in Conservation Biology and three in Applied Marine Science), as well as numerous BSc Honours projects (in Zoology, Biological Sciences and Mechanical Engineering). He currently supervises 5 PhD and 8 MSc students.”

The Gilchrist Memorial Medal, awarded every three years, is named after ichthyologist John Gilchrist (1866–1926) who worked in South Africa.  The previous medal award was to University of Cape Town’s marine biologist Coleen Moloney in 2014. Coleen is Peter’s partner: keeping it in the family! 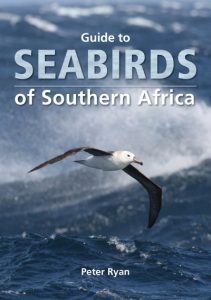