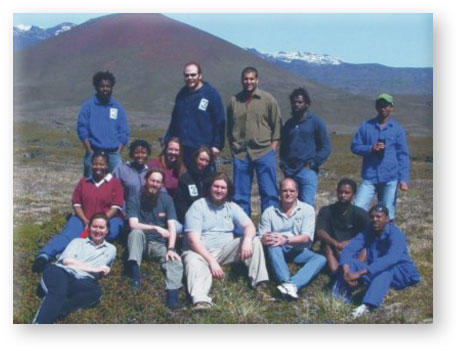 text by the University of Venda

Azwinndini Justice Ramunasi was born on the 13th of June 1974 at Magwedzha clinic in Ha Dumasi, Limpopo. He was the second born of Mr Bernard Ramunasi and the late Mrs Reineth Ramunasi, who passed away in 4 December 2017. He lived at Ha Budeli since he was born until 2017 when he moved to Tshitanini.

He started his primary education at Lukwarani Primary School in 1982 and passed his Grade 7 in 1988. He went to Tshilala Secondary School in 1989. He passed his matric in 1994. He enrolled with the University of Venda in 1995 for a Bachelors of Arts Degree, where he completed it in 2003. He furthered his studies by registering a Bachelors of Sciences: Honours Degree majoring in Zoology at the University of Venda in 2005.

In 2005 he went to Marion Island and was awarded with the certificate of appreciation for his involvement with the South African National Antarctic Programme and as a member of the Marion Island 61st overwintering team.

In 2007 he was granted a certificate of attendance course in writing and reviewing EIAs and EMPs managed by Oryx environmental project management and specialist expertise at the annual IAIA conference at the Lord Charles Hotel, Somerset West, South Africa. In 2009, he was awarded a certificate course in GIS at the University of Venda.

Azwinndini Justice Ramunasi was about to graduate on 20 September 2019 for a Degree in Bachelor of Environmental Science. He started his working career in 2007 at the University of Venda until he met his untimely death on 29 August 2019.

He left his wife, four children, farther, two brothers and two sisters. He will be solely missed by his colleagues, family members, friends, and the community at large.

He was laid to rest at Tshififi cemetery on the 7th of September 2019.

May his soul rest in peace.