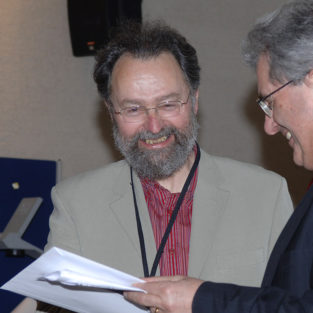 It is with great thoughts that we say goodbye to a colleague, advisor and researcher.

Emeritus Professor David W.H. Walton, PhD passed away suddenly on 12 February 2019 at the age of 73.  ALSA extends its sympathies to his widow, Sharon, who helped him with much of his Antarctic work. Photo Credit: British Antarctic Survey

The National Research Foundation (NRF) invited Prof David Walton to give lectures in South Africa, including at Stellenbosch University, on the role of humanities in Antarctic research that directly prompted Prof Steven Chown and John Cooper to make the first South African National Antarctic Programme (SANAP) fund application towards the establishment of ALSA.  So, in a way, he was the “founding father” of all the work and initiatives of the ALSA project.

John Cooper (previous Principal Investigator of ALSA) remembers attending many SCAR meetings with David over the years, as well as entertaining and interesting conversations with him around the world.  Special memories are of trading Antarctic books through Bluntisham Books (both a publishing house and supplier of second-hand Antarctic books) that he and his wife, Sharon operated, being helped editorially with papers submitted in its early days to the journal Antarctic Science, that David edited from its inception, and a pleasant lunch with them both in sight of Ely Cathedral in Cambridgeshire, England where I learnt of their hobby of visiting every English cathedral.  David had a wide range of interests and was perhaps the person who has most successfully brought science and humanities close together in the southern realms.

Ria Olivier’s memory of Prof David Walton: “He was to me a larger-than-life figure in the Antarctic Community. I first met him during the Scientific Committee on Antarctic Research (SCAR) meetings. David mentored a number of people and for us at ALSA he meant a lot and was very supportive of the legacy project. When David gave a presentation or even just during an informal discussion everyone will stop and listen to what he has to say. He was also the one person you could ask anything about Antarctic policy and Governance and he went out of his way whenever I had a question. I’ve come to understand and appreciate the enormous knowledge he had. For all that David meant to us, it was an honour to play a role in assisting him with the search for historical documents about Antarctic, Britain and South Africa collaborations. David also reviewed the South African National Antarctic Programme in 2007 (click here to view this report) and he was the chief scientist of the ACE (Antarctic Circumnavigation) Expedition, that started and ended in South Africa. For this reasons and all his support towards this project, I feel David forms part of the Antarctic Legacy of South Africa.Prof David Walton will be missed in the Antarctic community, but I am comforted by the knowledge that his accomplishments add to the Antarctic Science.