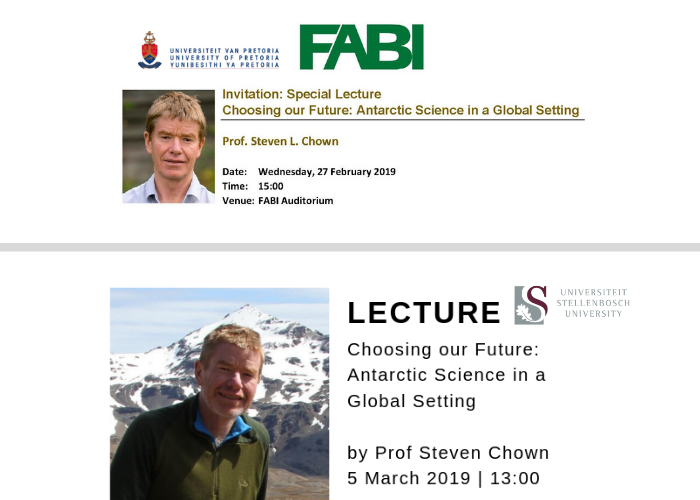 We are very excited to announce that one of the founding members of the Antarctic Legacy of South Africa, Prof Steven Chown, will be giving a lecture at Stellenbosch University on the 5th of March 2019, Room 2020 (Natural Science Building).

He will also give a lecture at the Forestry and Agricultural Biotechnology Institute Auditorium, University of Pretoria, 27 February 2019, 15:00.

The title of his talk is “Choosing our Future: Antarctic Science in a Global Setting”.

Prof Steven L Chown is a researcher at the School of Biological Sciences, Monash University, Victoria, Australia. He is also the President of the  Scientific Committee on Antarctic Research (SCAR).

Background on the talk:

The Paris Agreement has changed views on how much can be done to improve the way humans interact with our world. The Sustainable Development Goals have had a similar effect. Despite these compelling global efforts, reports continue to highlight declining quality of ecosystems, increasing threats to species, and growing greenhouse gas emissions. Much needs to be done to develop a clearer picture of status, trends, pressures, and the impacts of mitigation response on regional systems. For the Southern Ocean and Antarctica, which comprise nearly a third of the globe, and contribute significantly to global biodiversity, ecosystems services, and sea level rise, this is especially true. The next several decades are a crucial time for determining whether change accelerates or can be retarded.  How policy decisions play out in Antarctica and the Southern Ocean, how nations are in turn affected by these southern polar outcomes, and the nature of the feedbacks, will influence both global livelihoods and the future of the Antarctic region. Science is the only means available to develop the reliable knowledge needed to inform decision-making and reveal its consequences. Providing the best understanding of the Antarctic region and its global role, estimates of confidence in specific knowledge areas, and practicable approaches to address knowledge gaps are significant modern challenges for the science community.

Steven L Chown is Professor of Biological Sciences at Monash University, Melbourne, Australia. He founded and was inaugural Director of the South African National Centre of Excellence for Invasion Biology (2004-2012) and was previously Head of the School of Biological Sciences at Monash University (2013-2017). He now co-leads the Sustainable Development Strategy Group at Monash. A key part of his research concerns the biological impacts of the major global change drivers, with a substantial focus on the Antarctic and Southern Ocean. He has published widely, including some 400 scientific papers and several scientific and popular books. He is listed as a highly cited cross-disciplinary researcher. For many years, he has represented the Scientific Committee on Antarctic Research (SCAR) at the Antarctic Treaty Consultative Meetings. Currently he is President of SCAR, Australian Delegate to SCAR, and Chair of the National Committee for Antarctic Research of the Australian Academy of Science. Previously he was South African Delegate to SCAR and Chair of the South African National Committee for SCAR. Steven is the inaugural recipient of the Tinker-Muse Prize for Science and Policy in Antarctica. He has also received the SCAR Medal for Excellence in Antarctic Research, the South African Antarctic Gold Medal, and the Zoological Society of Southern Africa Gold Medal.

Click here for more detail regarding the talk given at Stellenbosch University. Also see the map below to get to the venue on 05 March 2019.