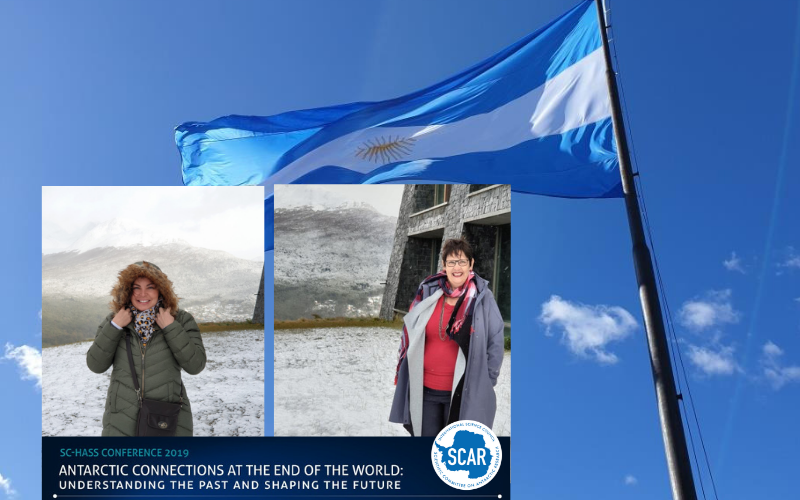 If your work is something that you look forward to, you are a very lucky human being. We have to attend conferences to tell other countries about South Africa’s Legacy in the Antarctic and to learn what other countries within the SCAR (Scientific Committee on Antarctic Research) community are doing. It is a huge honour but I am also proud to know that we do come out in the top. The past few weeks we had a heritage tour in South America on our way to our SCAR SC-HASS (Standing Committee on the Humanities and Social Sciences) Conference in Ushuaia, Argentina (click here for more information). This tour was packed with activities and not a lot of time to catch our breath.

This is a short journal of our journey in South America.

The trip began with 4 stops to Punta Arenas (30hours) and realise that not everybody speaks English.

Punta Arenas was like a quiet harbor town over the weekend and we did some exploring of the town and even visit one of the most beautiful cemeteries in the world. We had a street hot dog with 9 ingredients for dinner. We had a toast at the Shackleton Bar on The Endurance, which was very special as earlier in the year the South African vessel, the S.A. Agulhas II, was involved in finding what is left of the shipwreck. We ran into a military parade and met up with a Chilean Air Force Pilot, Rodrigo Sepulveda Hernandez, who told us more about the relationship between the Chilean Antarctic Institute (INACH) and the Chilean Military; Air Force, Army & Navy (responsible for logistics of the Chilean Antarctic Programme). We were able to spend an hour with the Chilean Antarctic Division, met the Director, Dr. Marcelo Leppe and we had a quick chat with their outreach and education division.

Next was our trip to Ushuaia that took take 4 days on a vessel, travelling through the Magellan Strait, Drakes’ Passage and the Beagle Channel. Visit the Terra del Fuego national park, during which time Anché was able to communicate her botany knowledge to the expedition crew and passengers on a Zodiac trip and during trail walking, as she found many plants she worked on, on Marion Island. I got to see Blechnum penna-marina and Racomitrium Lanuginosum – to only name two species. This led to a presentation (South Africa’s involvement in the Antarctic and sub-Antarctic) on the vessel by ALSA to the expedition crew and a few passengers. On the last day we were able to visit Cabo de Hornos, which is known as the “End of the World” and the Wandering Albatross monument. Anché was able to get to it, but as the weather changed some of us were only able to look at it from a distance.

Arriving in Ushuaia with all our luggage (2 extra bags with material for the conference) we stayed in a quaint cabana on top of the hill. We were able to stroll a day in town before the conference started.

At first it was the Data Management Workshop (click here for more information) and the Polar Museums Network meeting. The next day was a Public Holiday and we attended some event of the Malvinas war (Falkland war). Due to the change in conference venue, we did some investigation and were able to book at the fantastic Arakur Hotel, where the conference was held, for a very special price. Thank you Arakur, we were completely spoilt.

The SC-HASS conference led to many discussions after presentations, during tea and lunch breaks. But after 6 o’clock we could relax in the most amazing surroundings. We were also able to have a quick visit and tour of the Antarctic Experience in Ushuaia, where we were taken on a short virtual reality tour to Antarctica – fantastic initiative to connect the public with Antarctica.

In Buenos Aires we tended to visit the Antarctic museum at the Directorate, however it was closed for the public due to a three day long meeting.

We experienced the rich Argentinian and Chilean cultures and realised that they just like South Africa have huge ties to Antarctica. It was fantastic to visit two more Gateway Cities to Antarctica i.e. Punta Arenas and Ushuaia, and literally feel the connections to Antarctica. This trip was enlightening! It was also a privilege to do it with my colleague that is always willing to try new experiences and go the extra mile for the sake of the project – as project manager I could not ask for a better colleague. We cut costs by sharing accommodation, have long hours in transit (70 hours) and we use every opportunity that arise to tell the world about the great legacy of South Africa in the Antarctic.

Some tweets during the Conference:

Some presents before we head home. Thanks to Carlos Pedro Vairo (Argentina) and Nelson Llanos Sierra (Chile)!!
.#SCHASS2019 pic.twitter.com/j6nWISWKxg