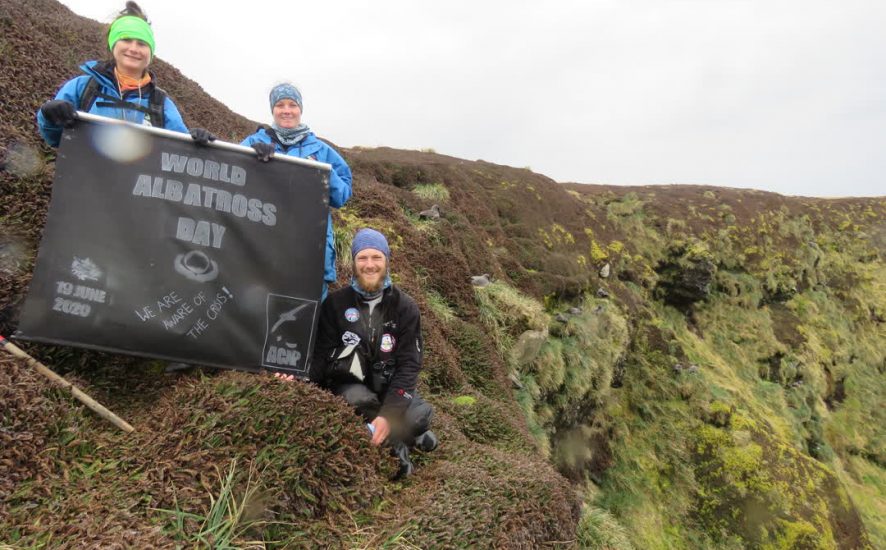 South Africa’s sub-Antarctic weather station on Marion Island has joined with the station on Gough Island to help raise awareness of next year’s inaugural World Albatross Day on 19 June 2020 by displaying a banner.

Both islands are inhabited by teams from South Africa’s National Antarctic Programme (SANAP) which include marine ornithologists who are studying the islands’ breeding seabirds, including their globally threatened albatrosses that are listed by the international Agreement on the Conservation of Albatrosses and Petrels (ACAP).  South Africa is a founding Party of the Agreement.

On Marion Island doctoral student Stefan Schoombie gave up some of his time to make a banner with help from colleagues.  Short of a spare white table cloth or bedsheet an old black-out blind was used instead to give a different look.  Stefan shares his views on World Albatross Day:  “Albatrosses are seldom seen by most, but are all so important to our oceans, never mind being among the most majestic of birds.  World Albatross Day is a great initiative to highlight the conservation crisis that these birds are facing.”

Stefan is in his third year on the island where he conducted his MSc research on population dynamics and distribution of  sooty albatrosses in 2013/14 (M70), and 2015/16 (M72).  Now a member of the M76 Team his Ph.D. research is entitled “Remotely sensing motion: the use of multiple technologies to detect fine-scale behaviour of breeding seabirds in a variable environment” through the FitzPatrick Institute of African Ornithology at South Africa’s University of Cape Town.  His field research is concentrating on Wandering Albatrosses this time.

Marion and Gough have joined three other sub-Antarctic islands which have also made and photographed their home-made World Albatross Day banners in the field;  the UK’s Bird Island (part of South Georgia) in the South Atlantic, and France’s Amsterdam and Possession (Crozets) Islands in the southern Indian.

More southern island banner photographs are expected as the summer breeding seasons get underway.  Following ACAP’s outreach, promises have come from elsewhere in the Southern Ocean: Australia’s Macquarie Island, for several New Zealand sub-Antarctic island groups, from France’s Kerguelen and from researchers based in the Falklands.  In the Northern Hemisphere it is hoped banners will be displayed on up to three of the USA’s Hawaiian Islands and on two islands belonging to Japan.  These banner displays next to albatross breeding colonies around the world will help raise awareness of what is intended to be an annual event: World Albatross Day on 19 June, being led from South Africa.

With thanks to Stefan Schoombie for information and photographs.