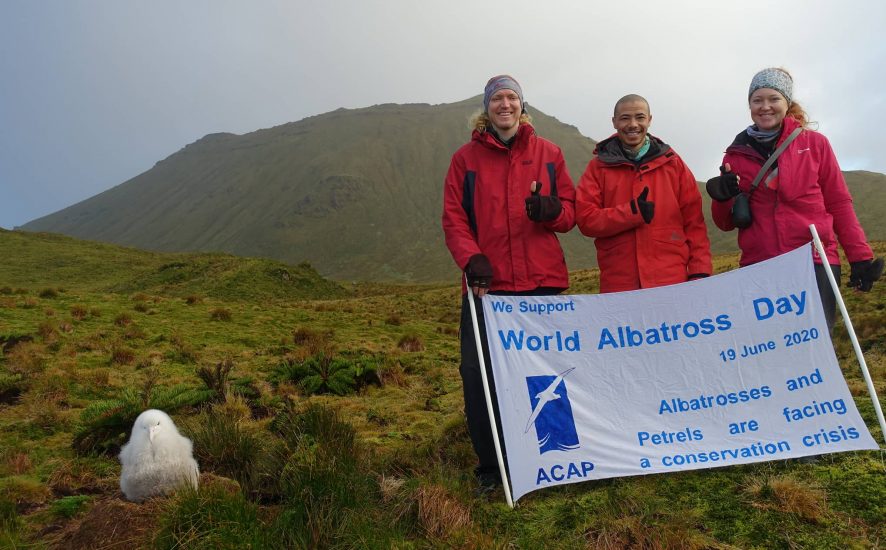 The original suggestion to hold a World Albatross Day came from Michelle Risi, a South African biologist currently conducting monitoring research on threatened albatrosses and other seabirds on Gough Island in the South Atlantic as part of South Africa’s G65 team. This is her third year on the island studying its seabirds, broken by a year on Marion Island and a sojourn working with seabirds in the Seychelles.  Along with ACAP’s Information Officer (who is also domiciled in South Africa), Michelle submitted an Information Paper to the ACAP meeting proposing the day that was favourably received. This has led to her being co-opted to ACAP’s World Albatross Day planning group, or ‘WAD Group’ for short.

As part of publicizing World Albatross Day prior to its inauguration field teams working with albatrosses at breeding localities around the world are being requested by Michelle (in the evenings after her hard days of field work) to make banners advertising the 19 June event and drawing attention to the birds’ conservation crisis.  The banners are then to be photographed with the field workers in the field, preferably with albatrosses in view.  Requests to join the ‘banner challenge’ are emphasizing that local regulations in respect to minimum approach distances to albatrosses and their nests should be adhered to when the photos are taken.

Banners have already been made and photographed by seabird researchers on South Africa’s Marion Island, the UK’s Bird Island (South Georgia) and France’s Amsterdam and Possession (Crozet) Islands.  Promises have come from Australian, Chilean, New Zealand, Japanese and USA albatross researchers.  As photographs of banners are received they are being posted to both ACAP’s website and Facebook page to help raise awareness of World Albatross Day.

South Africa is a founding Party of the Albatross and Petrel Agreement, having submitted its ratification in November 2003.  It is continuing to support the agreement via such ways as reported on here.