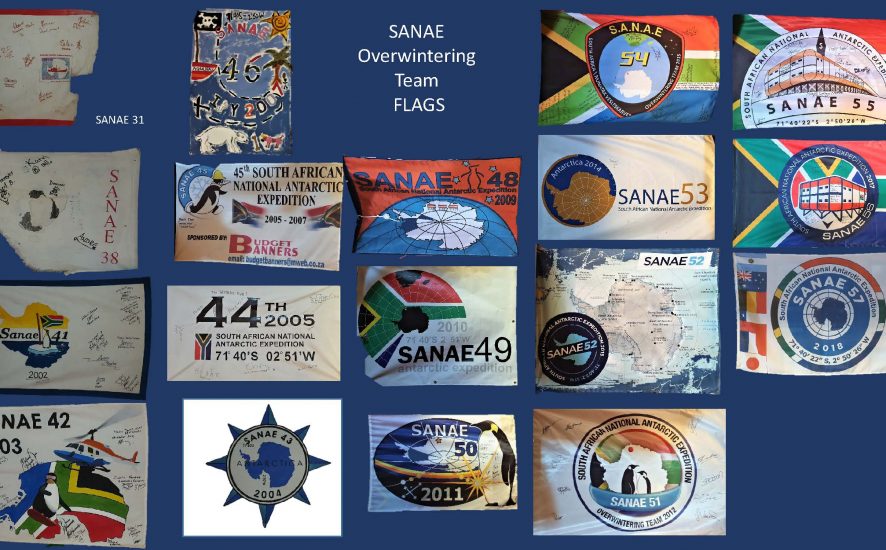 Flags all over the world representing a country, an institution, an organisation or a family is seen as an artefact.

A flag usually represents something that bring people together, despite  differences – even within families. At SANAE base the South African flag is on our SANAE

IV base for everyone to see and to send a message: this is South Africa.  The South African  flag at the Ceremonial South Pole indicates that we are one of the original Treaty Countries. Through the years many teams designed flags  and logos for their specific teams and therefore created these artefacts.

Previously the treaty countries’ flags were in SANAE III on display. Flags inside the SANAE III base. Photograph taken in 1993 during construction of SANAE IV base.

During ALSA’s visit to SANAE IV in January 2019 we were able to take photographs of these images and it is now possibly to preserve these artefacts through digitisation. There are only a few flags currently on the archive that has been included in team photos such as:

The cover photo is the flags that are currently at SANAE IV in the lounge.  The 58th overwintering flag will be hung in the library of SANAE IV by this time and this current team’s flag will also form part of the artefacts on ALSA’s digital archive. We believe there can be stories around the design of these flags and would like you to write us these stories and mail it to us to preserve with the image on the archive. Also important, if your team has a flag and it is not displayed on the cover photo, please send us the digital image so that it can be added to the archive. We are aware that mostly SANAE teams have created flags, but if you were on a Marion Island or Gough Island team that also had a flag, please send a photograph of this flag to ALSA.

We are also looking for team logo’s. These logo’s feature on clothing items such as buffs, jackets and more. This is the kind of memorabilia that defined a team. These are the artefacts of our legacy.

There are currently a few logos under artefacts, if your team’s logo (in the digital form or a photograph of the logo as a badge) isn’t part of this collection yet, please send it to us.

Our request is that you will mail us these images, with a story if there is one linked to the artefact. This is not just of the overwintering teams on Antarctica but also on Gough and Marion Island. We hope you can help us preserve this important artefacts that form part of the SANAP Heritage.