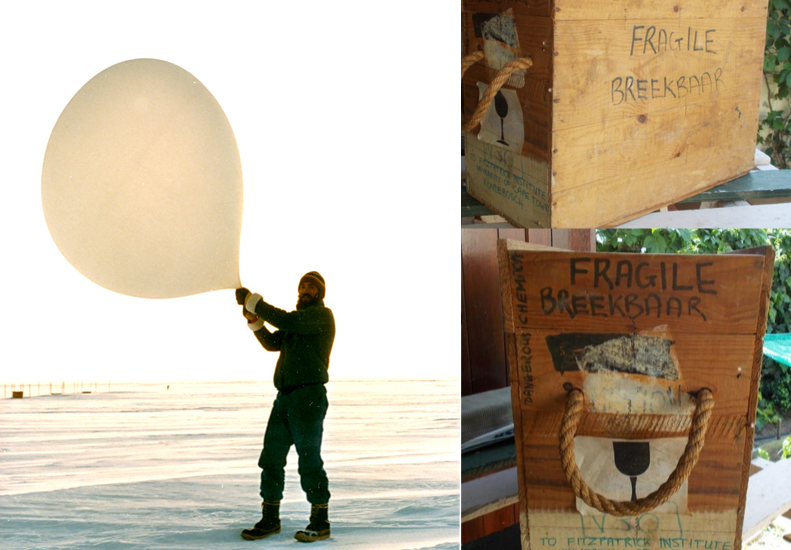 Derivation of the word metkassie

A ‘metkassie’ is a nickname long given to meteorological technicians at South Africa’s southern weather stations, including at Marion Island.

In pre-plastic days, and with the original need for man-handling cargo ashore across a boulder beach prior to the cliff top cranes at Gunner’s Point, supplies came ashore on Marion Island in small wooden boxes (see photos below) with rope handles – not so heavy that one person could not manage them across slippery rocks and up a steep slope.  Many if not most of these contained canned and dry food, so they were known as ‘koskassies’.  Translated from Afrikaans this means literally a “little food cabinet”.

The koskassies were copied from the pinewood boxes that, in the old days before garages and petrol pumps became common, contained two metal containers for petrol and paraffin. These containers were very similar to the ones seen in photo above, captioned ‘Koskassies being unloaded at SANAE, Antarctica. The containers storing dry food had either clip-on lids or earlier circular wide-mouth openings, whereas ones used for petrol and paraffin had narrow openings for pouring. Up into the 1980s hundreds of koskassies were knocked together at the Antarctic store in Cape Town, each numbered so their contents could be tracked.  Now replaced by plastic tote bins, they have become prized souvenirs for old ‘Marionites’.

Unlike canned food, latex weather balloons in their cardboard boxes are not heavy so at some stage larger wooden boxes to house the balloons were used that could still be carried easily enough by two persons.  To distinguish them from the standard koskassie they were known as ‘metkassies’.  At some time, lost to history, the meteorological technicians themselves got to be called metkassies.  The wooden kassies are no longer used, but the name has endured.