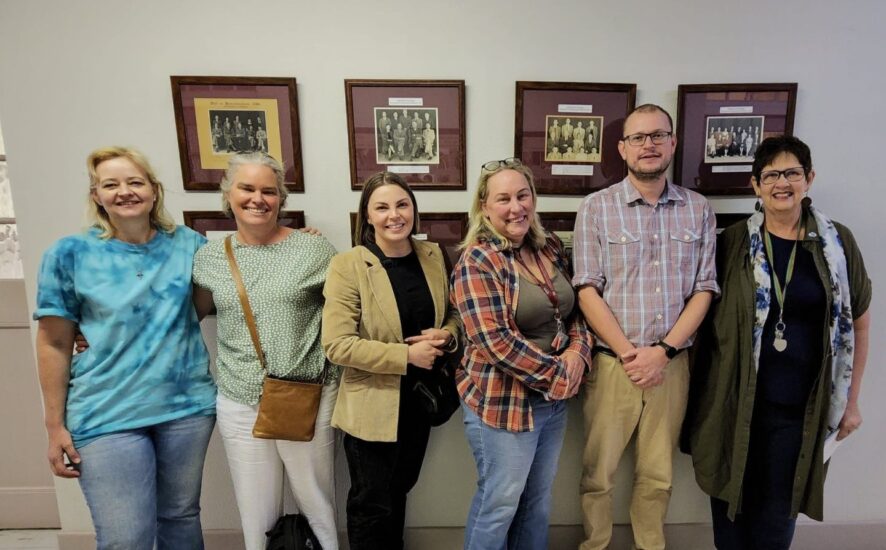 ALSA is hosted within the Department of Botany & Zoology at Stellenbosch University.
The department hosted its Annual Research Meeting on the 17th and 18th of November and the Centre of Excellence for Invasion Biology (CIB) hosted their ARM on the 22nd of November. Within the department is a number of previous Marion Island overwintering team members and take-over scientists, who all attended these meetings. In the featured image: (L-R): Erika Nortje (M58 & M60), Anne Treasure (M68), Anche Louw (M70/ALSA), Suzaan Kritzinger-Klopper (take-over scientist), Bernard Coetzee (UP, take-over scientists) and Ria Olivier (ALSA).
Dr Bernard Coetzee (Senior Lecturer at the Department of Zoology and Entomology, University of Pretoria) was invited to this year’s ARM of the department to give a presentation on his work on Artificial Light at Night. He has also been involved in Antarctic Research (with various publications). Bernard obtained his PhD within the South African National Antarctic Programme (SANAP) and has been on the Steering Committee of The Scientific Committee on Antarctic Research (2013-2015).

ALSA sponsored books for the best students of 2022, as well as for best presentations delivered (Honours, Masters and PhD) at both research meetings.
Anche Louw, Antarctic Legacy of South Africa, 25 November 2022