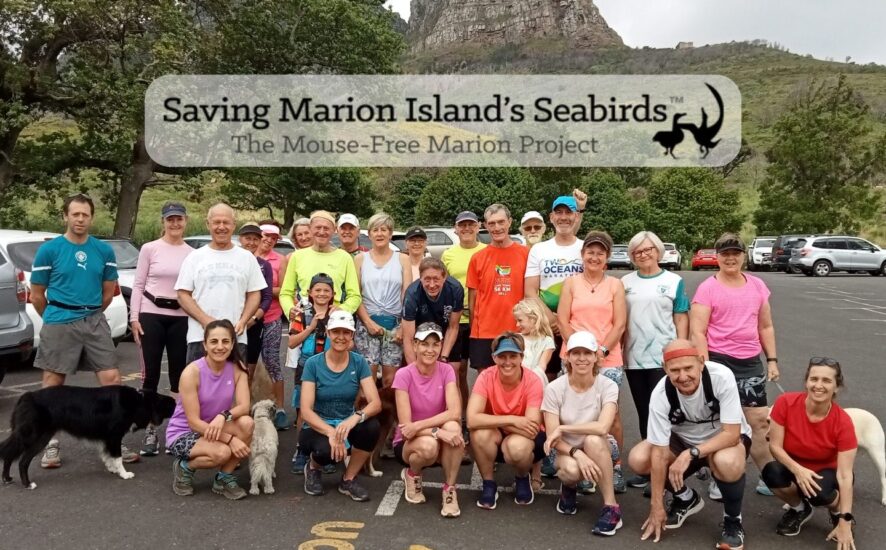 According to co-founder, Ken Andrew,“the Rondebosch Rocky Road Runners” consists of friends who enjoy running together, providing support and encouragement to each other in an attempt to remain fit, healthy and sane”.  As well as running early weekday mornings, three times a week year-round near to and on the slopes of Cape Town’s Table Mountain, the group holds monthly “Sunday Socials” with off-road run/walks on mountain trails and along shorelines that end around a picnic table laden with drinks and snacks.

Last month’s Sunday Social in Table Mountain’s Newlands Forest marked a special occasion, the 80th birthday of long-term member, Sydney Cullis the day before.  A retired surgeon and avid Antarctic historian, Sydney writes to MFM News that he started running with the Rondebosch Rocky Road Runners in 1987, 35 years ago, not too far off half his 80 years.  Instead of receiving a gift from his fellow runners, Sydney opted for contributions to be made in his name to the Mouse-Free Marion Project’s “Sponsor a Hectare” campaign.  Fellow runners gave most generously, allowing Sydney to sponsor nine hectares towards ridding the island of its albatross-killing mice – one hectare for each of his eight decades – and an extra one as he enters his ninth d cade.  This total includes the proceeds of sales of a coffee-table book on Marion and Prince Edward Islands, kindly donated by the Antarctic Legacy of South Africa.  The book sales were made at two lectures Sydney gave shortly before his birthday, to the Ship Society of South Africa and to the Woodside Village retirement complex, on the discovery of Marion and Prince Edward Islands by French explorer, Marion du Fresne in 1771, two and a half centuries ago.

The MFM Project’s News Correspondent joined Sydney at both talks when he briefly described the project and requested the audience to vote for it in its successful bid to win funds from the European Outdoor Conservation Association (EOCA).

Grateful thanks to Rondebosch Rocky Road Runners, Richard and Susan Hook, who hosted Sydney Cullis’ post-run morning tea in their home, and to all the runners who contributed to the spread (and of to the nine hectares), and thanks to Ria Olivier, Antarctic Legacy of South Africa, for donating the books.

This is not the first time the Rondebosch Rocky Road Runners has sponsored hectares to mark a birthday.  Earlier in the year it celebrated the News Correspondent’s 75th in a similar way (click here).  And with another 80th coming up next year, maybe it has started a tradition?

The Mouse-Free Marion Project is a registered non-profit company (No. 2020/922433/08) in South Africa, established to eradicate the invasive albatross-killing mice on Marion Island in the Southern Ocean.  The project was initiated by BirdLife South Africa and the South African Department of Forestry, Fisheries and the Environment.  Upon successful completion, the project will restore the critical breeding habitat of over two million seabirds, many globally threatened, and improve the island’s resilience to a warming climate.  For more information or to support the project please visit mousefreemarion.org.

Featured Image:Rondebosch Rocky Road Runners gather on the slopes of Table Mountain to run with Sydney Cullis (in yellow top with grandson) to mark his 80th birthday, photograph by John Cooper.