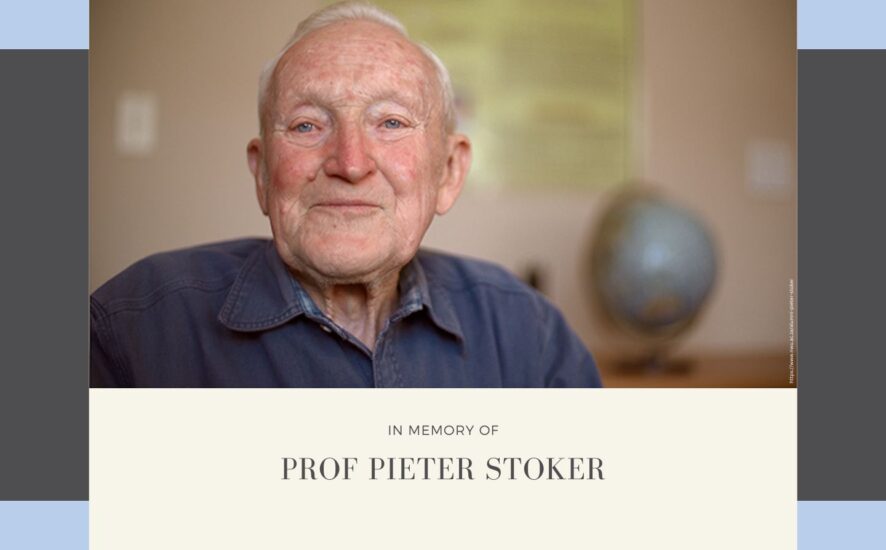 It is with sadness that we share the passing of Prof Pieter Stoker on Tuesday, 08 November 2022.

Prof Stoker became part of research in Antarctica in 1959 and since 1964 his group was formally involved in research in the South African National Committee on Antarctic Research (SANCAR), currently the South African National Antarctic Programme (SANAP). Prof Stoker was program director of the Antarctic research program on cosmic rays since 1963 until 1996. In 1994 he received the BP medal for Antarctic research. In 2009 an Antarctic meeting decided to rename the departure hall of the S.A. Agulhas (and since 2012 the S.A. Agulhas II) to Pieter Stoker SANAP Centre. Read more about Prof Stoker’s career at the North West University, Potchefstroom Campus, here.

Click here to view documents and images of Prof Stoker on the ALSA Archive.

Prof Pieter Stoker left his mark in my career! I met Prof Pieter for the first time at the prize-giving function of the Matric Mathematics Olympiad at Potchefstroom University in 1970.  At the time, he was already a well-known lecturer and researcher and as a young man strongly encouraged me to further my studies in natural sciences. Years later when, as  a researcher at the Hermanus Magnetic Observatory, I had  the opportunity to visit NWU again to present a lecture on space weather, I made contact again with him. I was responsible for recording the calibration readings on  the neutron monitors at the HMO from time to time, often liaising with him whenever there seemed to be  an anomaly on the data. I understand from Pieter Kotze that the neutron monitor station with which cosmic radiation is observed at the HMO in Hermanus is the oldest continuously registering station in the world.  This would certainly not have been possible without the contribution of Prof Pieter Stoker. It has been in operation since 1957. Although there are older stations, the others are intermittent at times.  Thanks to Prof Pieter, the HMO station was nonstop.

When I visited SANAE IV in December 2006, I saw the NWU’s imaging riometer in operation and found out that Prof Stoker and his PhD student Burt Wilson were responsible for the design thereof. I was convinced that one would find a correlation between ionospheric events on SANAE as observed with  the image riometer, the Aurora cameras, and the ionospheric sintillation receivers that I helped install at SANAE in 2006. Prof Pieter supported the research idea. The bottom line was that I had the privilege  of working with him on an article on riometer measurements and sintillation measurements on SANAE (click here to view the paper that was submitted for publication).  In 2009, Prof Pieter visited the HMO in Hermanus during the Winter School to talk about upgrading the imaging riometer at SANAE IV. Below a photo taken at the event.

Our deepest condolences to the family and friends and all those within the Antarctic community, who had the privilege of working with Prof Stoker.