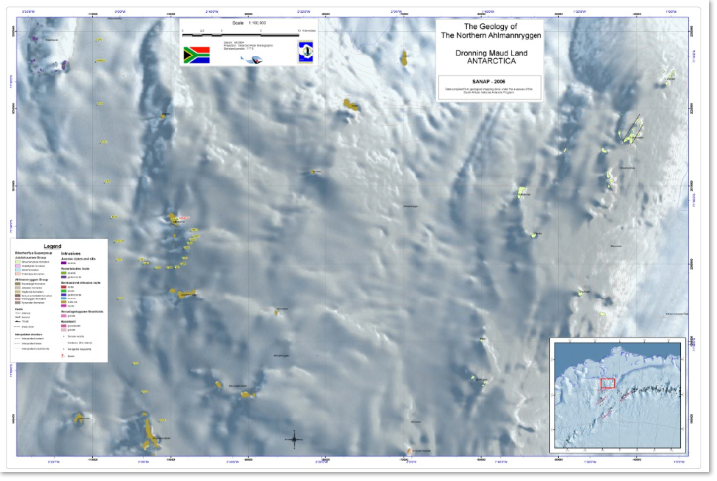 A new collection category, MAPS, has been added to the digital repository/archive of the Antarctic Legacy of South Africa. As from today all maps of earlier times as well as current times will be added to this category.

The first few entries to this collection includes the the digital Maps of Antarctica, by Dr Geoffrey Gratham. These maps are a valuable addition to the legacy database. Dr Geoffrey Grantham of University of Johannesburg is the rincipal Investigator of the Gondwana Amalgamation and Correlation Research Project.

In April 2006 a geological database was created and this resulted in a series of 1:100 000 scale geological maps. These maps have been produced on a composite radar/MODIS background. Hard copies of these, can be printed directly from the pdf files, which form part of the delivered product.

The following maps are now available on the Antarctic Legacy of South Africa archive.

The geology of the Northern Ahlmanryggen.

The geology of the Northern Sverdrupfjella,

The geology of the Urfjell.

The geology of the Borgmassivet.

The geology of the Central Kirwanvegn.

Read more on the SANAP Digital Geological Database on the archive.

Over the past decades researchers working under the auspices of the South African National Antarctic Program (SANAP) have acquired a considerable volume of geological data from that region of Antarctica, that surrounds SANAE IV. This data, which is in the form mainly of un-georeferenced hard-copy geological maps and geochemical and geochronological data, resides in various scattered archives and university libraries.