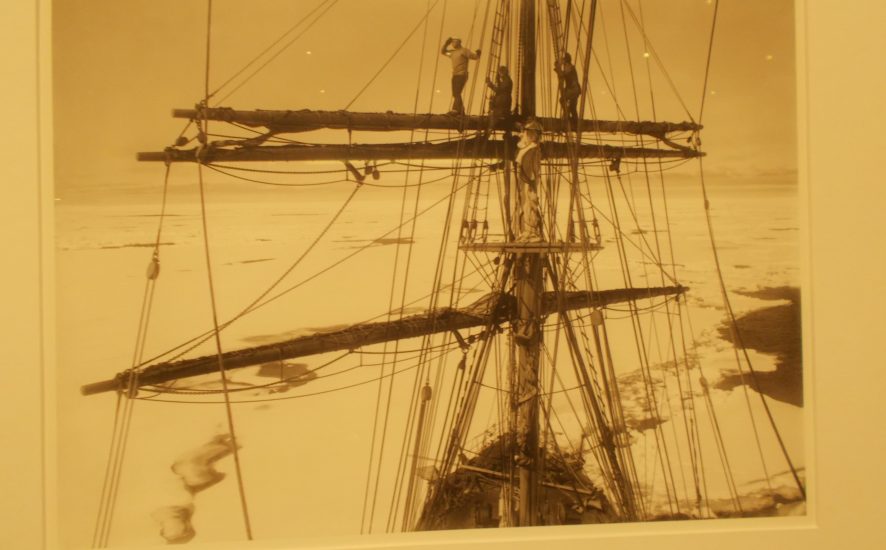 “Uncle Bill handed me a parcel which contained all his sketches.  He asked me to take charge of it, and deliver it to his wife, telling me it was his earnest hope that we might have a joint exhibition of our work – his sketches and my photographs” – Herbert Ponting, British Antarctic Expedition, 1910-1913.

Last week I visited the Visions of the Great White South Exhibition held in Bonhams Auction House, New Bond Street, London.  The exhibition, which closes tomorrow, makes use of the Scott Polar Research Institute‘s historical collections, juxtaposing photographs (newly printed by the platinum-palladium process) by Herbert Ponting with water colours by Edward Wilson, from Captain Robert Falcon Scott’s last expedition to Antarctica.  Lesser-known Antarctic photographs taken by Scott himself under Ponting’s tutelage are also on display, along with modern artworks by SPRI Antarctic Artists in Residence, including Dafila Scott, grand-daughter of Captain Scott. 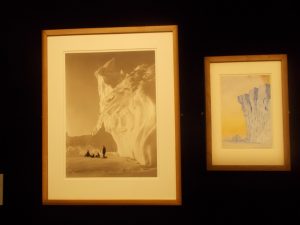 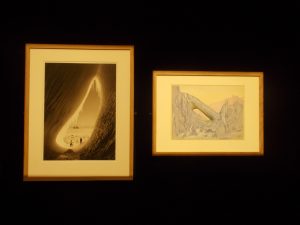 With the kind agreement of Charlotte Connelly, Curator of the SPRI Polar Museum, who put together the exhibition (and gave a good talk while I was present) and Cathy Cooper of the Friends of SPRI (who was manning the welcome desk) I was allowed to take (non-flash so not good quality!) photos of the artwork to illustrate this article.

It was a special privilege to view the Wilson originals as they are rarely exhibited to avoid fading.  But for me Ponting’s two photographs of Petty Officer Patrick Keohane and glaciologist and assistant physicist Charles “Silas” Wright, taken near immediately after their return from sledging as members of the first supporting group to the Polar Party were the most poignant, summing up in their weather-worn faces the extreme hardship their compatriots faced before their demise on their way back from 90°S.

The main link with South Africa and its Antarctic legacy is that Scott’s British Antarctic Expedition of 1910-1913 called at Simon’s Town on the Terra Nova on its way south.

Feature photograph: “In the ice-pack, from the Main-top of the Terra Nova” by Herbert Ponting