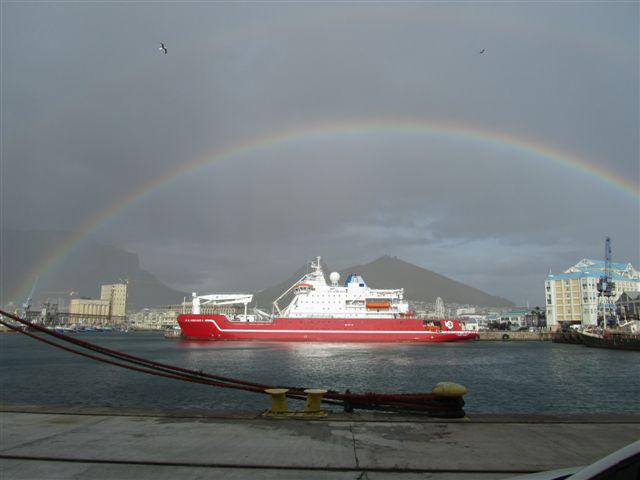 Peter Persicaner  lived in South Africa (Port Elizabeth and Cape Town) for most of his life , and from an early age developed a passion for islands in the South Atlantic and Antarctica and the ships that served them. I visited Tristan da Cunha and spent a week on the island in 2006 , while on a RMS ST HELENA cruise which also circled Gough Island. It is my firm intention to visit Tristan da Cunha again in the not too distant future on the S.A. AGULHAS II. Peter contacted the Antarctic Legacy of South Africa to share his images and his “ramblings” with the project.

His images of the S.A. Agulhas II are now available on the archive. Below a few of the images taken by Peter of the “S.A. AGULHAS II” on February 19th , 2013 when the vessel returned to Cape Town after her first visit to Antarctica. 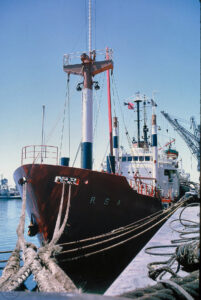 “ I go a long way back in my “memory bank” as far as South African-flagged research- / expedition-ships are concerned . I remember being on the quayside to welcome the R.S.A. to her home-port of Cape Town from the shipbuilding yard in Osaka , Japan on the last day of December , 1961. The R.S.A.  was dressed overall with every conceivable flag available onboard , and with her bright red hull and orange , white and blue funnel and masts , looked immaculate as she slowly , but proudly , made her way into the Duncan Dock and to G berth. The quayside was filled to overflowing with politicians , administrators , port officials , etc. not to mention the wives , girlfriends , children and relatives of the 23 officers and crew who had not seen their men for a long , long time. (Image – Huub Czanik, availbale on ALSA archive)

What a day to be in Cape Town … the timing could not have been better , since most of the crew and officers were able to look forward to spending New Year’s Day with their loved ones !! I waited patiently for all the dignitaries to disembark , and in the early afternoon went onboard and met Captain Ken McNish , John Orrock (Chief Officer) and Mr I. Sato (who was the “Guarantee Chief Engineer” provided by the vessel’s builders , Fuginagata Shipbuilding in Osaka.

I presented a plaque to commemorate this auspicious occasion to Captain McNish , who graciously thanked me.

The next 4 -5 days were hectic to say the least , since the R.S.A. had to be loaded with cargo (diesel oil , foodstuffs , equipment , medical supplies and numerous other commodities such as 5 husky puppies and 5 full-grown huskies essential for the maintenance of a smoothly functioning scientific station in Antarctica) , since the R.S.A. was about to embark on the first of many voyages “down south”. 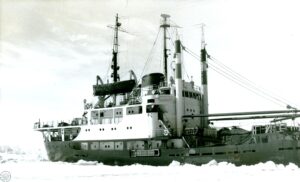 Supporting Captain McNish on her maiden voyage to Antarctica were 12 officers (which included Commander Jack Netterberg [who served as “Ice Pilot”] and the indefatigable Mr Sato , who must have wondered what he was doing going down to Antarctica instead of being back home with his family in Japan) , a crew of 22 , a Public Works Department Team of 13 and the SANAE III team of 13 scientists , radio-operators , surveyors , meteorologists , etc. How they managed to accommodate everyone onboard is still a mystery to me . I can only presume that “comfort” as we know and accept it today was not the norm back in the early-1960’s !! The first voyage to Antarctic by the R.S.A. was anything but smooth-sailing , since very bad weather hampered progress . not to mention being trapped in the pack-ice shortly after departing the SANAE base for home.(Image – E Lautenbach, available on ALSA archive)

Over the years that followed Captain’s McNish and Funk sailed the R.S.A. down to the ice , and to Marion Island , Gough Island and Tristan da Cunha on many occasions before the R.S.A. was replaced by the new S.A. AGULHAS in 1978. Although the R.S.A. was no longer an “active” expedition- / research-vessel , she fulfilled many useful roles before being broken up .. and I never missed an opportunity to visit her regardless of where she was berthed in the port.

I , too , have wonderful memories of the “S.A. AGULHAS” , and recall meeting Captain Leith (whose daughter [Wendy]was the “Weather Lady” on SATV in the 1970’s and beyond). Shortly after the “S.A. AGULHAS” entered service , one of the crew lamented that they did not have a “sound system” in their lounge … and later on that same afternoon , the local SHIP SOCIETY ensured that this “fault” was rectified.

I thank you most sincerely for putting up with the ramblings of an old man , who still loves the sea and ships as much as he did in his youth , and who looks forward with unbridled anticipation to every “next visit” to his BELOVED Cape Town. Kindest nautical regards.”

(Text and images of S.A. Agulhas II supplied by Peter Persicaner. Other Images from  ALSA archive)