The Antarctic Legacy of South Africa Archive want to build a comprehensive digital archive as possible. There will always be gaps where images and documents have been lost. Below we thank John Woodhull to share his memories and images with ALSA. These images will be added to the archive and therefore his involvement will now be preserved.

John Woodhull emigrated to South Africa in August 1963 and was employed as a time served carpenter and joiner in the Governments English equivalent Ministry of Public Building and Works (MPBW) in Cape Town  in Cape Town with his family. “During the early part of 1964 the MPBW were recruiting internally for tradesmen to join a working tour of duty of approximately three months duration to the islands of Tristan de Cunha and Gough Island to carry out maintenance repairs to the weather station and an aerial survey of Bouvet Island, Antarctica. The team leader in charge of the artisans was a gentleman named Mr. McCall.

John Woodhull – spot of fishing (Snoek) during break time on the R.S.A. The expedition sailed from Cape Town on the R.S.A. and to the best of my memory, headed to Tristan de Cunha with a cargo of livestock, supplies and provisions of all description, mechanical equipment and a very happy bunch of Tristan Islanders who were returning to the island, following the volcanic eruption in 1961 forcing the evacuation of the entire population via Cape Town to Surrey in England.

(l-r: volcanic damage, settlement buildings, supplies to islands and helicopter from the R.S.A. delivering supplies) After approximately 5 – 6 days the R.S.A. anchored off Tristan to offload the islands proportion of the cargo by means of the ships motorised rubberised pontoons and helicopter and the islands small boats. The R.S.A. departed Tristan after a few days and sailed for Gough Island. On arrival at Gough Island the R.S.A. anchored on the leeward side of the island and once again the motorised pontoons were loaded and headed toward what we called “jump off rock” a small landing area at the base of the cliffs beneath the station and subsequently hoisted up the cliffs and transferred to the station. 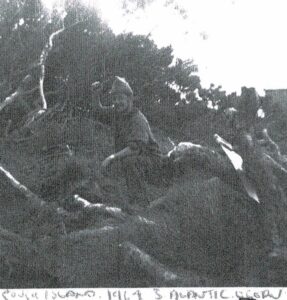 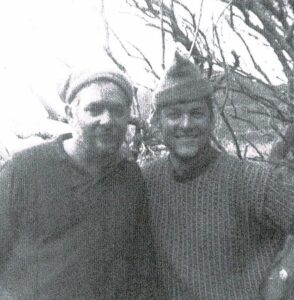 (Right)John Woodhull and South African colleague. Our work programme was very intensive from internal to external operations around the station including re-siting the mountain water supply/man made dam which supplied the station.

The camaraderie between the island team, who incidentally were dressed like modern Robinson Crusoe’s in man-made local seal skins, fur hats etc., the R.S.A. crew and the artisans was absolutely terrific. With such a short period of time allocated to complete the works programme, everybody joined in working long hours, followed by a few beers and movies etc. and these memories will stay with me for ever.

After our spell on Gough Island the R.S.A. headed toward Antarctica to carry out a joint aerial survey of Bouvet Island with the Royal Navy HMS Birmingham. I understood the survey was to establish why the automated weather station on the island had malfunctioned and there was some talk about an abandoned boat being discovered on the island. After completing the survey and various oceanic requirements the R.S.A. headed back to Cape Town completing the expedition. So sad to note the demise of the R.S.A.

I returned to England from South Africa during 1965 leaving behind unforgettable memories of the 1964 expedition. I attach a few photographs of my experiences.”

Note: Expedition to the Antarctic and islands circa may – June 1964. As there were no diary/records kept by john Woodhull only images it may be possible to obtain accurate dates and times from the ship the R.S.A. logbook or official South African maritime records of smp movements records/documents at the time.

Text and Images by John Woodhull