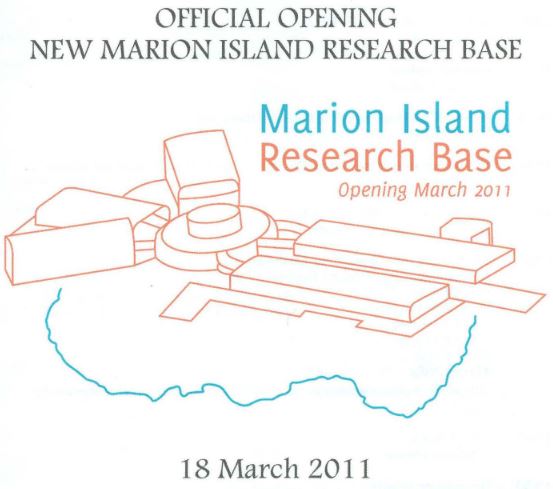 On 18 March 2011 the new base at Marion Island was officially opened in a ceremony on the island.  The new base was built over a number of years adjacent to the old base. 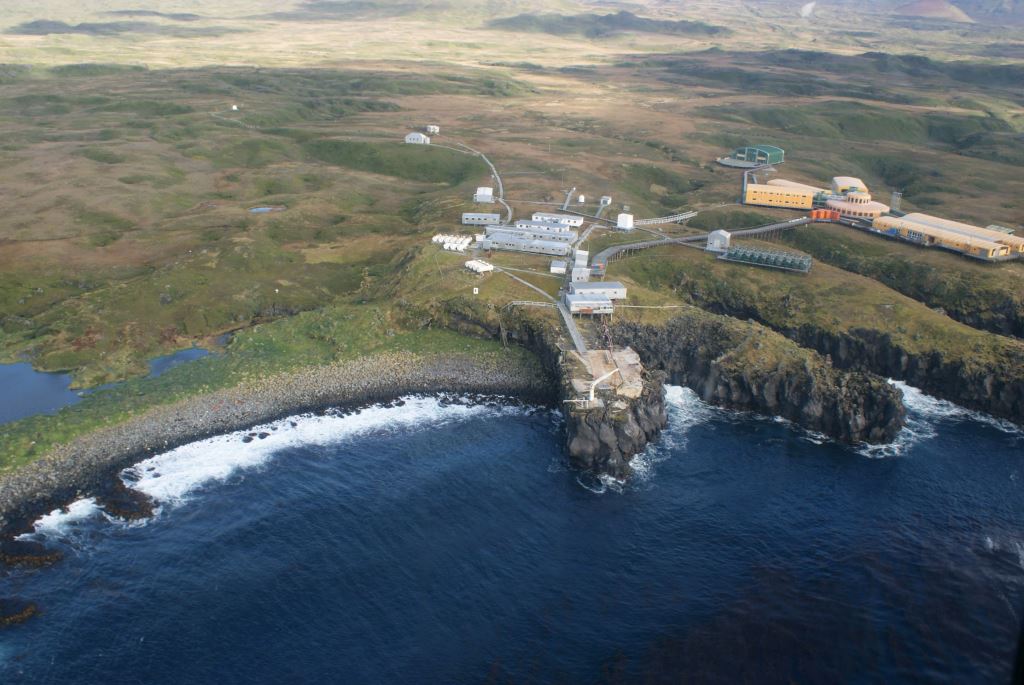 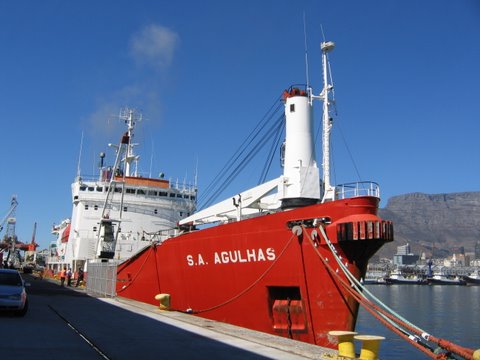 A special voyage of the S.A. Agulhas was laid on to take invited guests, including university researchers and media, south for the event.  This was Voyage 155 of the ‘red taxi’, towards the end of its life as South Africa’s Antarctic research and supply vessel, which had commenced in 1978.  A short trip, the S.A. Agulhas left Cape Town on 10 March and was back on the 24th, with just four days scheduled to be spent at Marion, including sailing round both islands, Marion and Prince Edward Island (the two islands of the Prince Edward Islands group).

The new base has two of these rather distinctive ‘sky corridors’ to link upper levels. They have to be kept dark at nights to avoid bird strikes when the mist rolls in.

The official opening took place on the evening of the 18th, commencing with the National Anthem.  Following a welcome, a technical background talk was given by Fred Johnston, Cape Town Regional Manager of the National Department of Public Works (NDPW; which body built the base).  Dr Monde Mayekiso, Deputy Director-General, Department of Environmental Affairs (at the time) then made an acceptance speech, after which the then Deputy Minister of Public Works, Ms Hendrietta Bogopane-Zulu spoke.  A plaque marking the official opening was then unveiled by the Deputy Minister.

Following thanks by DEA’s Departmental Coordinating Officer for the voyage, Adriaan Dreyer and the presentation of gifts and a toast by Henry Valentine, then Director of DEA’s Antarctica & Islands Directorate, the guests moved to the dining room for a “finger supper”, with champagne, wine and sherry.

Although the new base was officially opened , work on it was still required and so the ship left behind a 25-member NDPW construction team under the leadership of Heine Smith which stayed until the annual relief voyage a month later.

The opportunity was taken during the time ashore to place and dedicate a new cross made by the NDPW over the grave of Daniel Jacobs, who had drowned off Boulder Beach in January 1948.  The previous cross, thought to be the second erected, had rotted and fallen down a few years before. Joseph Daniels was the first person to die in the service of the South African National Antarctic Programme sensu lato, but is by no means the last. Read more here.

Links to the ALSA Archive:

Text by John Cooper (18 March 2016), Principal Investigator of Antarctic Legacy of South Africa at the time. This article has been edited, 18 March 2022. Photos supplied by Anche Louw.