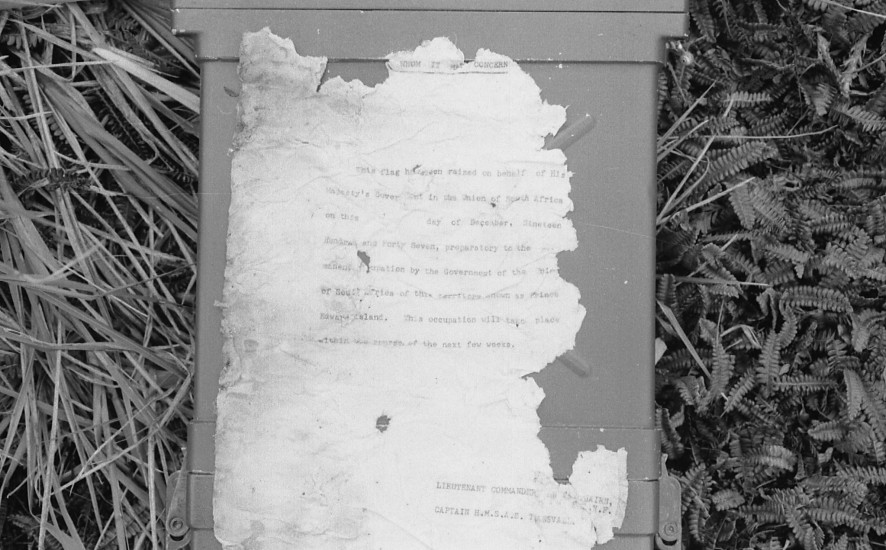 Following the occupation of Marion Island on 29 December 1947, Lieutenant-Commander John Fairbairn, Captain of the frigate H.M.S.A.S. Transvaal, is landed by “crayfish dinghy” after being towed by the ship’s motor boat into Cave Bay on Prince Edward Island on 4 January 1948.

Only two others are with him in the dinghy: Petty Officer Ernie W. Sadler and Leading Seaman Firmani.  While they hold the dinghy in the shallows off the boulders, Fairbairn jumps into the water and scrambles ashore soaked “up to his neck” at 15h50.  He then reads out the Deed of Sovereignty alone near the large cave after which the bay is named.  He erects a metal South African flag and after signing it places the deed in a brass cylinder which he lashes to the flagstaff.  He also leaves a ship’s nameplate with the date “hurriedly”‘  punched on it under piled-up rocks.  Being alone all he can do is to photograph the flag and canister in the poor light.  At 16h11 he is dragged aboard the dinghy and returned to the ship for a change of clothes.

The current whereabouts of the metal flag and the nameplate are unknown to ALSA, as are the two photographs reported as taken.  The Deed in its container was last seen and photographed – in a poor state of preservation  – on site on 26 April 1976 by Eduard van Zinderen Bakker, Junior.  It may still be there under rocks, but I have not seen it on my four visits to the island made since then.  The ship’s plaque visible on the island dates from a later visit of the Transvaal‘s sister frigate, the H.M.S.A.S. Natal.

Lt-Cdr Fairbairn recommended that the nearby point be called Sadler Point after his Petty Officer “whose zeal, energy and initiative had helped so much to make the landing possible”.  This name in the form Sadler’s Point appears on the SAN 2003 maritime chart of 1989 but, perhaps, unfortunately, the name “R.S.A. Point” appears instead on the island’s only (and now much out of date) topographical map that was drawn in 1965.  It is fair to say that Prince Edward Island is the poorest mapped part of South Africa.  Approaches to authorities to remedy this over the last decade have yet to yield results.

Text by John Cooper (2016), Principal Investigator of Antarctic Legacy of South Africa at the time.