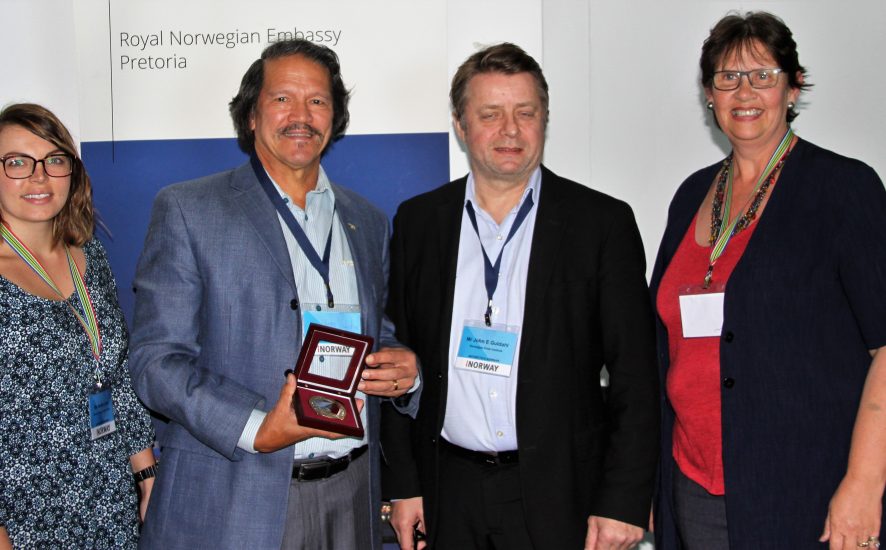 Henry Valentine has been selected as one of two recipients of the inaugural COMNAP (Council of Managers of National Antarctic Programs) Chairman’s Medal, in recognition of his work as COMNAP MNAP and as Director of the South African National Antarctic Program over many years. This award was announced at the first plenary session of the COMNAP AGM XXIX, Brno Czech Republic, on Monday 31 July 2017. Unfortunately Henry Valentine could not attend this meeting to receive this medal. Henry advised COMNAP’s secretary to courier his medal to South Africa, but COMNAP decided to make sure Henry receive his well-deserved medal by means of a more personal hand over and this took place yesterday, 5th of Desember 2017 at the second day of the South Africa/Norway Science Week II. Henry Valentine’s medal was presented to him by John Guldahl (Executive Committee of COMNAP).

The second day of the South Africa/Norway Science Week focused on Antarctic and Southern Ocean research and was held at the Department of Agriculture, Forestry and Fisheries Research Aquarium in Seapoint, Cape Town. During this seminar, Norwegians and South Africans had the chance to ‘showcase’ some of their science projects in the Antarctic and in the Southern Ocean. Some of these projects have been conducted already in collaboration with South Africa, as the Norwegian Station (Troll) is the closest neighbor to South Africa’s Antarctic station (SANAE IV). There are however vast room for further collaboration opportunities between Norway and South Africa. Click here, to see the presentations delivered during this seminar or visit Innovation Norway.

ALSA sponsored a book for this event, for each person that attended the seminar: “Exploring a sub-Antarctic Wilderness”, by Brian J Huntley. This book was published by Antarctic Legacy of South Africa in 2016.

The inscription of the Inaugural COMNAP Chairman’s Award read:

“For outstanding contribution to the goals and principles of COMNAP”

“The COMNAP Chair will choose one candidate (an individual, group of individuals or a National Antarctic Program) to receive the medal. There will be one Chair’s Medal at the successful completion of each COMNAP Chairmanship (usually, every three years), and in exceptional circumstances more than one candidate can be chosen. In choosing the candidate, the Chair shall give consideration to a range of issues, which may include inter alia:

The decision as to who to award the inaugural Medal to was a difficult one, given the number of people over the years that have contributed to the goals and purposes of COMNAP as an organisation, who have supported best practice, and who have given their all to the success of their own National Antarctic Program. However, Henry’s record of achievements stood out with his 35‐year history of service within SANAP as an academic, researcher, administrator and manager.

His contributions to COMNAP have also been many, with attendance and participation at fourteen COMNAP Annual General Meetings (beginning with the 1997 AGM in Cape Town, then 2001‐2013), with your term as COMNAP MNAP Representative on the Executive Committee (2004‐2007), membership on the COMNAP IPY Co‐ordination Group (2004‐2008), and with the hosting of the COMNAP Icebreaker Workshop held aboard the SA Agulhas II in Cape Town, South Africa (2013).

In addition to the many contributions he made to COMNAP over the years, COMNAP note that he also contributed to COMNAP’s scientific knowledge of the Antarctic by the authoring or co‐authoring of more than two dozen scientific papers, by leading the South African ATCM delegation for ten years, and by overseeing significant projects related to SANAP (South African National Antarctic Programme), including the programme’s move into the Waterfront facilities, the construction of the new base on Marion Island and the construction of the impressive research and supply vessel SA Agulhas II.