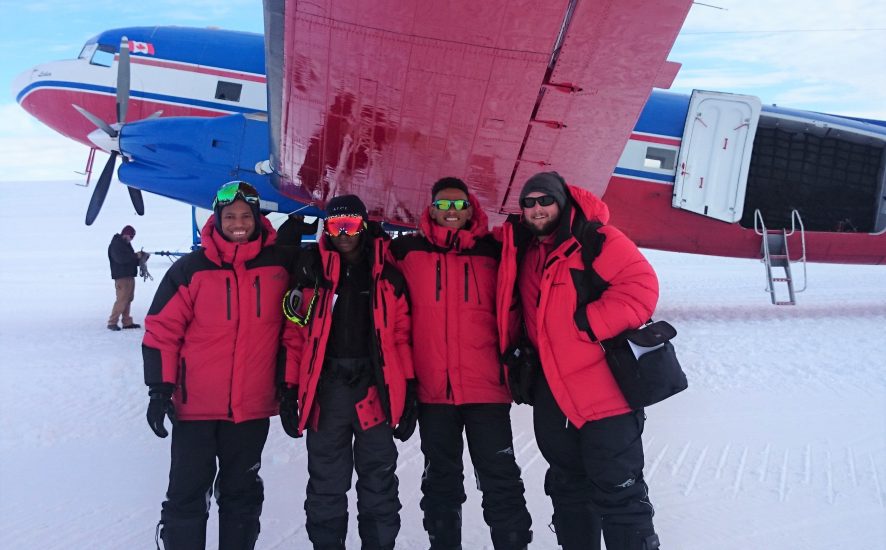 history (19 years) of conducting and supporting National Program and Non-Governmental expeditions to Antarctica along very sound, safe and environmental principles, in line with the

international standards as regulated through the Antarctic Treaty. ALCI air transportation provides a full range of services for the flights from Cape Town to Antarctica. Antarctic Logistics Centre International, fully operational since September 2001, was formed due to an increase in the activities of Antarctic operators and agencies utilizing Cape Town as their gateway to Antarctica. ALCI aims to professionally service the specific requirements of all Antarctic operators, as well as establishing the necessary infrastructure and facilities to provide, maintain and service specialised Antarctic vehicles and equipment in Cape Town.

In this regard the company is part of South Africa’s Legacy of The Antarctic. South Africans have made use of this transportation over the years. ALCI is also committed to supporting and promoting scientific projects in Antarctica that reinforce knowledge through education and awareness programs in line with Antarctic Treaty Measures, Decisions and Resolutions.

Richard Skinner was asked to drive such a program which in summary took the following form:

Four pupils from Mount Edmund Christian Brothers College (CBC) recently had the experience of a lifetime when they travelled to Antarctica to experience the harsh and unique environment of the frozen Continent. Khetla Sebalo, Oarabile Mphahlele, Donato Pillay and Joshua du Preez flew to Antarctica and spent 6 days on the ice from 1 to 6 February 2020. They experienced first-hand the beauty of Antarctica during two 3-hour hikes around the Schirmacher Oasis area where they were based. They also got the opportunity to visit the Russian research station, Novolavarevskaya as well as the Indian station, Maitri. Here they were informed of the various scientific projects that take place there.

The four boys were selected from the top 10 academic achieving students at the school. The learners also had to hand in a submission stating why they would like to be considered, their knowledge of the Antarctic and how it could positively impact their future career ambitions. Prior to their departure they also partook in an Antarctic educational programme in Pretoria and Cape Town during which they received lectures from a number of experienced Antarctic scientists.

Ria Olivier of the Antarctic Legacy gave them a talk at Iziko Museum’s exhibit: Sentinels of the South.  She highlighted South Africa’s involvement in the Antarctic region and took them through the exhibition and provide information of South African stations and national programme (SANAP)

It was priceless seeing the student’s excitement when they received their bulky protective Antarctic kit and realised the trip was now a reality. Likewise, the awe on their faces when they first set foot on the continent and the shock of the cold, remoteness, magnitude and the beauty of the place struck them. It was an experience that few have been fortunate enough to enjoy and that the students will remember for the rest of their lives.

The Teacher who accompanied the group said that the CBC Antarctic expedition was nothing short of spectacular:

“The four students and myself, have been educated as to the history, operations, scientific endeavour, professional opportunities, environmental practices and beauty of Antarctica in all its splendour. We have all returned with a new understanding and view of the world, eager to share and educate our peers. Doors have been opened, horizons broadened and young minds inspired. Thank you for everything from the moment we arrived until we departed. It has been and continues to be an experience that has no rival.”

The students themselves summed up their experiences as follows:

“Thank you with all of my being. I have never seen or experienced anything like I did in Antarctica. The science was fascinating and I hope to see myself in Antarctica one day in the future working on a scientific discovery of my own.” – Nathaniel;

“Everyone we met were incredible. Thank you a million times over. We received so much more than an education. We got to experience the world in the way it was supposed to be.“ – Oarabile;

“Best days of my life. No words or pictures do it justice. I will never forget how I felt being out on the ice. Other world experience” – Donato; and

“To describe our trip is almost impossible. It was beyond incredible. I cannot believe the size of Antarctica. Thank you for the opportunity and privilege to go to the most interesting and beautiful place on Earth” – Joshua