Assessing lizards’ vulnerability to warming: how close should we zoom in?

Climate data are increasingly accessible and are being used to predict which species are most vulnerable to climate change. The available datasets often consist of monthly measurements or predictions for locations every dozens or hundreds of kilometres. Can such coarse data provide realistic vulnerability assessments for small organisms? To answer this question Raquel A. Garcia, Susana Clusella-Trullas and Jessica Allen from the C·I·B zoomed in to the thermal landscape that lizards experience on the ground.

As ectothermic species, lizards depend on their environment to achieve optimal body temperatures that maximise performance. In the morning of a summer day they can be seen basking in the sun or actively foraging, but in the peak of the heat they retreat to refuges in rock crevices or under the shade of plants. The same shuttling strategy can help lizards buffer the effects of future warming to some extent. Capturing the thermal heterogeneity that exists within a lizard’s home range is thus critical in vulnerability assessments, but it requires data at finer scales than those of readily available global datasets.

The new study used a unique fine-scale dataset collected in the Hottentots-Holland Nature Reserve, home to the Girdled Lizard (Cordylus oelofseni). The data describe the temperatures available across a small rock outcrop, in 28 micro-sites covering different levels of sun and wind exposure, orientation and substrate, every five minutes during five years. To assess the lizard’s vulnerability to warming, the authors calculated popular indices that compare available habitat temperatures to the species’ preferred or critical body temperatures. To test the effect of scale, the authors sub-sampled the dataset in time or in space and recalculated the indices. The results clearly showed that coarser data can lead to inaccurate assessments, with large uncertainty depending on the data subset used. 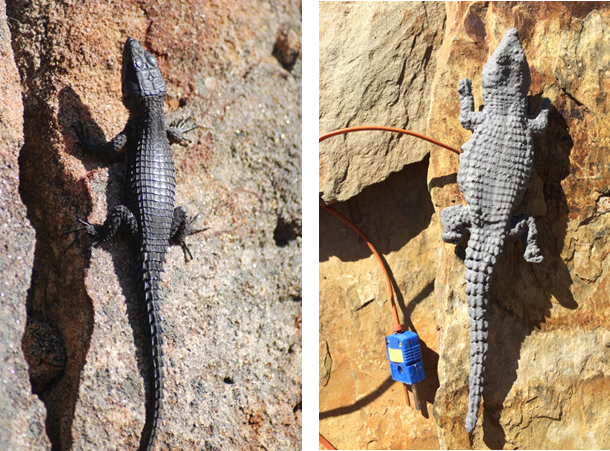 To measure the habitat temperatures available to Girdled Lizards (left), the study’s authors used ‘operative temperature models’ (right). These models were hollow copper replicas of the lizards, with a temperature sensor inside that was connected to a central data logger. By mimicking the thermal properties of live organisms in the absence of physiological function, these models can accurately predict the temperature that a live organism would experience in the same location.
(Photos by Raquel A. Garcia)

Scale has been described by Levin as “the fundamental conceptual problem in ecology, if not in all of science”. The choice of spatial and temporal scale is a frequent point of debate in assessments of species’ vulnerability to warming. The new study shows the implications of choosing inappropriate scales to compute popular vulnerability indices such as Thermal Safety Margin and Habitat Thermal Quality. To be meaningful, indices assessing organismal vulnerability should rely on habitat temperature data that match, as much as possible, the scale at which the organism experiences the environment.

“Accessing fine-scale data is not always feasible”, says Raquel A. Garcia, “but this work offers a word of caution to biologists who use these indices and to conservation practitioners who rely on index estimates”.

Read the paper in Ecography