First finding of a parasitic fungus on ladybirds in South Africa

The first detection of the parasitic fungus Hesperomyces virescens on ladybirds (coccinellid beetles) in South Africa was made by a team of researchers from Harvard University and Stellenbosch University.

Hesperomyces virescens is a fungus that infects adult ladybirds and can be identified by yellow fruiting bodies that the fungus produces from spores (see picture below). These spores are spread from one ladybird to another through direct contact. It is mostly found on specific places such as the back of ladybirds suggesting that it spreads during mating or when ladybirds intermingle while forming groups to keep warm in winter. 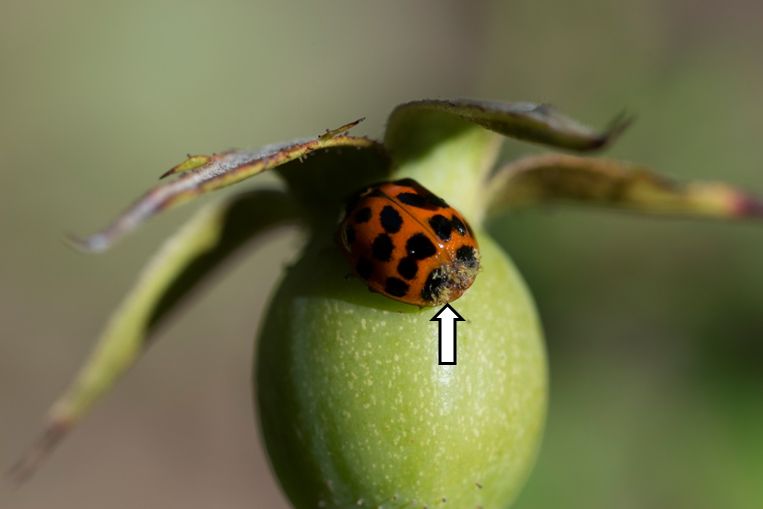 Yellow fruiting bodies (indicated by the arrow) on the dorsal end of an invasive harlequin ladybird, Harmonia axyridis (Photo credit: Ingrid A. Minnaar)

Ladybirds collected in Stellenbosch between 2013 and 2015 were screened for these fungal fruiting bodies, and DNA sequencing techniques were used to identify the fungus. The researchers reported the first records of the fungus on the invasive harlequin ladybird, Harmonia axyridis, and on the native ladybird, Cheilomenes propinqua. The findings suggest that the main host for this fungus in South Africa is the invasive ladybird Harmonia axyridis. Native to Asia, this beetle has spread to all continents, except Antarctica. Its aggressive nature and competition with other ladybirds has led to the decline of native ladybird species in many regions of the world.