The determination of best climatic predictors of whole-organismal performance is essential to improve current and forecast impacts of climate change on organisms. Most of the emphasis on global climate change and its effects on organismal performance concerns mean temperature conditions despite known changes in other climatic variables such as precipitation, cloud cover and temperature variability. In addition to increases in mean air temperature, ongoing climatic change includes alteration of the frequency of extreme temperature and precipitation events, alteration in the magnitude of variation of these events, and interactions among these climate variables. Given the large influence that the surrounding environment plays on the performance of ectotherms, which largely rely on the operative environment to maintain body temperature at optimal levels, climate predictors other than mean thermal conditions are expected to improve predictions of organismal performance. Moreover, a variety of theoretical models have emphasized the potential ways in which climate variability affects the shape of performance curves. 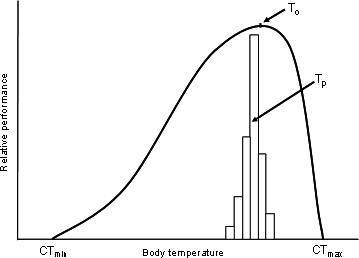 In a recent publication in the influential journal American Naturalist, Susana Clusella-Trullas and Steven L. Chown from the C·I·B and Tim M. Blackburn from the Institute of Zoology, used three commonly measured parameters of thermal performance in lizards and snakes to investigate the extent to which temperature variation, precipitation and their interaction are likely to influence the thermal performance curves of these organisms. Data were compiled from the literature and strict criteria were used to select studies for these analyses, resulting in 396 species belonging to 16 families. Locations of populations previously sampled for performance were geo-referenced and used to determine climate predictors.

The study showed that among species, the maximum temperature tolerated before loss of function, typically measured as the loss of righting response, was more closely related to temperature variation than to mean annual temperature. In addition, the temperature at which performance is maintained optimally, referred to as the preferred body temperature, was more closely related to precipitation than to mean annual conditions. By contrast, the minimum temperature tolerated before the loss of righting response was best predicted by mean temperature conditions. These findings, including the direction of the patterns found, were consistent even when accounting for phylogeny and for various ecological and life-history characteristics such as activity periods, reproductive mode and habitat use which differed greatly among species investigated.

This study brings long-awaited evidence that temperature variation and precipitation have had strong influences on the evolution of two components of reptile performance. It also highlights the increased vulnerability of species inhabiting sub-tropical and arid regions where increased ambient temperatures coupled with forecasts of lower precipitation and cloud cover will further reduce the thermal window within which squamate reptiles can operate optimally.

Exemplars of species included in the analyses are the Cape dwarf chameleon Bradypodion pumilum (left) and the Cape girdled lizard Cordylus cordylus (right).