Climate change is predicted to have serious consequences for people, who will be exposed to natural disasters such as floods, droughts, fires and coastal storm surges that are linked to climate change. It is further predicted that climate change will be inevitable, even under the most optimistic of scenarios, as the world continues its commitment to the use of fossil fuels.

Given this inevitability, a team of scientists based at the Council for Scientific and Industrial Research (CSIR), and supported by C·I·B researchers, Dr David Le Maitre and Prof Brian van Wilgen, explored the feasibility of ameliorating some of the predicted natural disasters through appropriate land management.

Their study, which was published in the scientific journal PLoS ONE, found that land cover changes due to human activities, are likely to increase natural disasters. In particular, this study highlights how the clearing of invasive alien trees, the re-vegetating of clear-felled forests and the restoring of coastal dunes could reduce the impacts of natural disasters to a large degree. For example, controlling the spread and reducing the cover of invasive alien pine trees in fynbos catchment areas, could reduce the intensity of wildfires by almost half. The same levels of control could also reduce the impacts of droughts on the level and duration of low flows in rivers.

Prof Brian van Wilgen, an ecologist with the C·I·B and co-author, says the study highlights the value of maintaining well-managed and uninvaded landscapes, and their role in reducing the impacts of extreme climate events:

“Most of the advantages of proactive land management could be achieved at a cost that would be far below that of the estimated cost of the potential damages.” 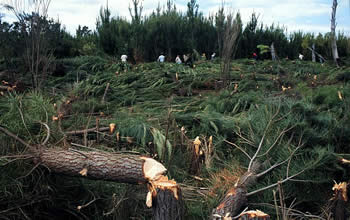