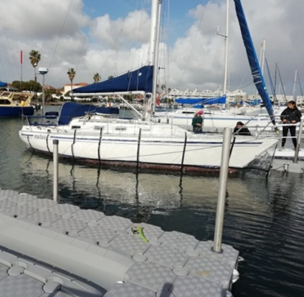 Many marine organisms move around the world on the bottom of ships and yachts. This living layer is commonly referred to as hull fouling. Unfortunately, hull fouling not only increases both the drag and fuel consumption of vessels, but is also one of the major contributors to the introduction and spread of invasive species. Invasive species are problematic as they can have impacts of both an ecological and economic nature in their new homes. This problem was addressed by the invention of antifouling paints which prevents the attachment of organisms to the vessels’ surfaces. However, the most successful paints, those containing tributyltin (TBT), were banned in the early 2000s due to their harmful effects in the oceans. The ban of TBT resulted in a resurgence in hull fouling and while many other paints and chemicals have been tried and tested, as of yet, no effective alternative solution has been found.

Well-maintained yachts pose little threat in terms of alien species, but that is not the case for those with lots of hull fouling. This is most problematic when heavily fouled foreign vessels arrive in South African waters. While the obvious answer is to clean them when they arrive in our harbours, this is easier said than done because vessels often need to wait their turn to be taken out of the water in order to be cleaned. It is while these vessels wait in the water to be cleaned that alien species can spread into the local environment. 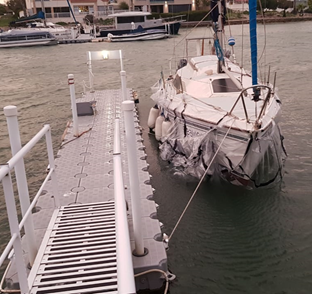 Encapsulating vessels refers to wrapping them in plastic to create a closed system in which oxygen and food resources are depleted by the fouling organisms and in which waste products build up. The encapsulated organisms die from this lack of oxygen and food.

In our study, we looked at the possibility of using encapsulation as a method for killing fouling on foreign yachts arriving in South African harbours, thus preventing the introduction and spread of organisms from other regions.

Laboratory tests were done by enclosing both communities and individual organisms in plastic bags, while field tests were done by encapsulating both small, recreational yachts and pontoons on the underside of harbour walkways with large plastic bags constructed in the laboratory. Without letting any clean water into the encapsulation system, water samples were taken from inside the plastic covering every day to monitor the levels of dissolved oxygen and waste products as well as the pH within the encapsulation system. These were then compared to unencapsulated water samples taken from the surrounding water in the harbour. With these water samples, we were able to demonstrate the increasing levels of waste products (ammonia and sulphide) in the system over time as well as the decrease in both dissolved oxygen and pH. From our preliminary results it is clear that this technique is more effective on heavily fouled vessels than vessels with little covering, as waste products build up faster and oxygen is used up sooner. 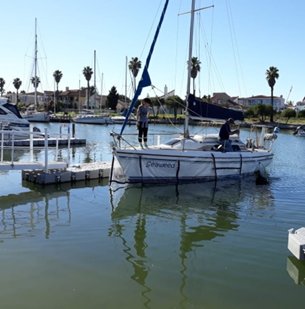 From this study we would therefore like to provide written recommendations for the use of encapsulation on foreign vessels with significant amounts of fouling as they come into ports in South Africa. With the use of this technique, we hope to decrease the number of introductions of alien marine organisms in South African harbours and thus the potential competition for space and resources between these organisms and those native to South Africa. In doing so, we may be able to reduce the ecological and economic threat that is posed to our marine species and biodiversity by invasive species from other countries.

If you would like any more information on our study please email Catherine Keanly (katie@sun.ac.za).

Barriers to the management of Prosopis (mesquite), a widespread invasive tree