Alien pests of agriculture cause billions of Rands’ worth of damage to South African crops every year. Knowledge on which pests could pose a threat in the future is vital to inform South Africa’s biosecurity.

One such agricultural pest is the wheat curl mite (Aceria tosichella), a pest of cereal crops, such as maize and wheat. The mite has been introduced to many parts of the world, where it has caused extensive wheat yield losses. While some of this damage is caused by the mite itself, the majority is caused by the viruses it transmits, for example, wheat streak mosaic virus. This virus has caused wheat yield to be reduced by up to 99% in some parts of the United States of America (USA). Despite having a wide global distribution, neither the wheat curl mite, nor its viruses, have been reported in South Africa.

In order to determine if measures need to be put in place to prevent the introduction of wheat curl mite, Ms Tamryn Venter, a student at the University of Pretoria, along with Prof. Mark Robertson (C∙I∙B  Core Team Member), Dr Davina Saccaggi (researcher at Department of Agriculture, Land Reform and Rural Development), and Dr Katelyn Faulkner (researcher at South African National Biodiversity Institute), examined whether the mite is likely to be introduced to and establish in South Africa.

Wheat curl mite could be transported to South Africa on grass growing in imported pot plants, or on imported seeds and live tissues of host plants. Therefore, the researchers used import data for these pathways to determine whether they link South Africa to parts of the world where the mite is present. A species distribution model for the mite was developed, using occurrence records and climatic variables that are important for the mite’s survival. The results of this model were used alongside data on wheat and maize production to determine whether wheat curl mite could establish in South Africa where its hosts are grown. 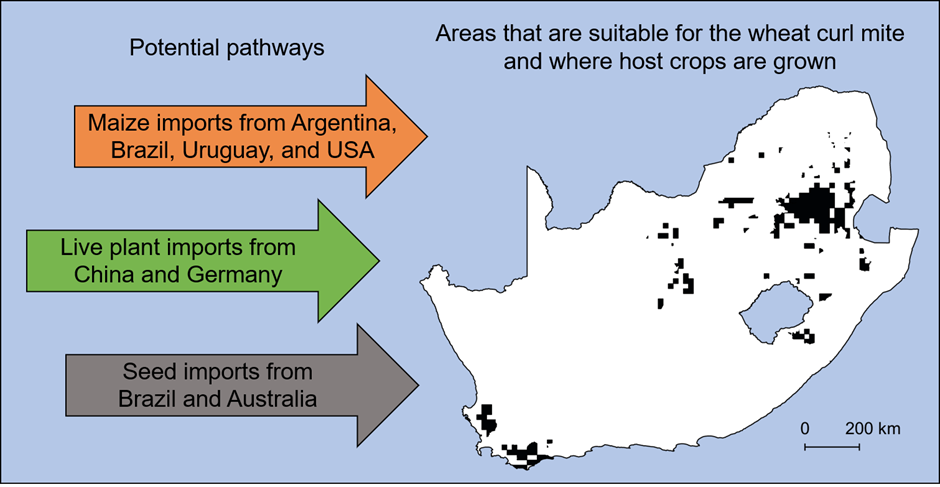 The study also shows that parts of South Africa are climatically suitable for the wheat curl mite, and that the mite’s host crops are grown in some of these suitable areas. Therefore, if the wheat curl mite is introduced, it is likely to establish and cause extensive damage to agriculture.

Tamryn says, “Our results clearly show that the wheat curl mite could pose a threat in South Africa, and so we recommend that the mite be considered for inclusion in South Africa’s import conditions as a quarantine pest for the highlighted imports. Similar research on other agricultural pests is also required to assess their likelihood of being introduced and establishing in South Africa.”

Understanding Parthenium invasions: the role of stocking rates in savannas

Black Alder as an emergent invader in South Africa